To conduct a wildlife survey to identify priority clean up areas, as part of the Tier 2 oil spill exercise run by Gisborne District Council.

The survey was conducted by Sandy Bull, Darryl Coulter, Hayley Pearson and Graeme Finlayson on the morning (0900h – 1100h) of 4 December 2014.

The survey was conducted by foot at low tide using hand-held binoculars to increase field of vision and accuracy of species identification. At the conclusion of the survey the wildlife response team convened with the remainder of the exercise team who were conducting a beach clean-up exercise. Findings from the wildlife assessment were shared with the rest of the oil response crew to highlight likely wildlife response options and decide on priority clean-up areas.

The beach contained relatively few birds, with only a few individual birds located in the shallow rock pools or on the beach. A significant pied shag nesting tree was located above the high tide mark approximately 200 metres from the Gisborne Yacht Club. The beach is used for dog walking which may contribute to a reduced presence of birds throughout the day. 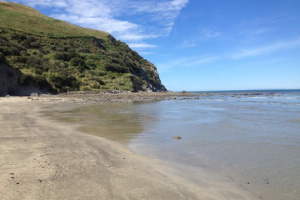 Hayley and Darryl identifying birds during the exercise