Kaikoura contains an abundance of marine mammals and seabirds and a spill in this area could have severe consequences. This exercise was about pre-planning, reviewing local species needs and equipment available and there were some great learnings.

A howling southerly accompanied by squally showers set the scene for this year’s Canterbury Oil Spill Exercise in South Bay, Kaikoura. But the show must go on (as they say) and wet weather gear was donned, along with a steely attitude.

The exercise was coordinated by the new Environment Canterbury Harbourmaster and Regional On-scene Commander (ROSC) Jim Dilley and brought together staff from Environment Canterbury, the Department of Conservation, and Coastguard - all agencies who would be involved in a local oil spill response. 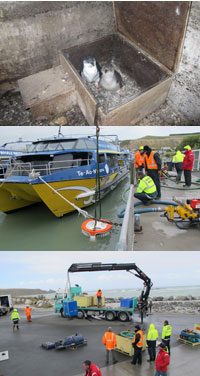 Kaikoura contains an abundance of marine mammals and seabirds and a spill in this area could have severe consequences, therefore pre-planning is imperative for this biodiversity haven. Little blue penguins feature here and the Coastguard and community have a great educational resource right underneath them, literally! Beneath the Coastguard building and a nearby shed a special facility has been built for little blue penguins, containing nest boxes and a special penguin entranceway. This is helpful from an oiled wildlife perspective as there is good data of the population. Additionally, in the event of a spill, capture or pre-emptive capture will be much easier than the usual penguin habitat of steep hills and scrub.

The exercise was based on a scenario of an oil spill occurring in South Bay Marina.

The wildlife response team led by Mimouk Hannan and Ian Surgenor (Canterbury’s National Oiled Wildlife Response Team Reps) carried out shoreline assessments and gathered information on species and abundance of local wildlife to feed into the Regional Contingency Plan. The Oiled Wildlife Trailer and Blue Box (wildlife response gear) were taken to the site and the contents examined for familiarisation and to check expiry dates on products.

The oil response team practiced setting up and implementing systems that would be employed in the event of a spill.

Both teams checked out the local facilities pre-identified for the set-up of an oiled wildlife treatment facility and tapped the knowledge of local Department of Conservation employees: Kaikoura DOC staff will be an essential part of any future oil response effort.

It was valuable to carry out an oil spill exercise in an unfamiliar area and form relationships with the people who will be involved should a spill occur in the future. Good data was gained as well as familiarisation of the site and essential equipment.