The efficacy of sea water as a wash for oiled birds

In early 2015, the Wildbase Oil Response team conducted a research project to test the effectiveness of using sea water for washing oiled mallards.

The project was a continuation of a previous feather wash study which aimed to provide an alternative for the large amount of water that is required for washing oiled wildlife in remote areas of New Zealand such as the offshore islands.

There were a number of logistical challenges for the research including transporting 10,000 litres of sea water to our facility at Massey University and getting a suitable source of live animals for the study.

Thanks to Dwyertech who assisted with the study and organised the seawater collection, and Wildbase ambassador Craig ‘Duckman’ Shepherd who provided us with the 44 hand-reared ducks we needed for the study.

The study was conducted during one week in January 2015 and included a team of 20 participants. The team included former veterinary wildlife residents Baukje Lenting, Micah Jensen and Danielle Sijbranda, all of whom had previous oiled wildlife response experience from the C/V Rena incident.

We were also lucky enough to have Curt Clumpner from International Bird Rescue in town for the research. Curt has attended numerous spills throughout the world and has a wealth of knowledge when it comes to oiled wildlife research.

The research was a great opportunity for Wildbase Oil Response to test the functionality of the facility at Massey and work as a team for the first time since Graeme, Louise and Hayley joined Wildbase in April 2014.

Preliminary results suggest that seawater may provide an alternative to freshwater when the latter is scarce, albeit that the wash process may take slightly longer and require more water. 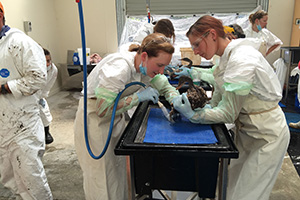