When the CV Rena went aground in October 2011, thousands of animals were affected, predominantly seabirds and coastal birds from the area, but also local seal populations (and inky-pawed dogs!). One of the National Oiled Wildlife Response team’s biggest challenges to date, the response saw 420 live, oiled birds decontaminated and rehabilitated and 60 dotterel captured pre-emptively.

Post-monitoring has been continuing, so a year and a half on, we look at any ongoing effects on local wildlife, and the impact of the wildlife response process and pre-emptive capture programmes on local populations today. 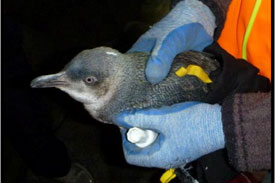 A total of 420 live, oiled birds were collected and taken into captivity for decontamination and rehabilitation. Additionally, 60 northern New Zealand dotterel – a nationally threatened species - were captured pre-emptively and kept in captivity while the beaches were cleaned of oil.

The predominant species was little blue penguins, with 365 of the 383 admitted birds released back into the wild – a 95% success rate. Unfortunately, six dotterels died from a fungal respiratory condition called aspergillosis, despite medical treatment. The remaining 54 birds (90%) maintained excellent body condition and these birds were released as their territories were given the all-clear.

Post-release monitoring provides essential information about longer-term impacts to these populations.  All rehabilitated penguins were individually microchipped prior to release, with an additional 350 control (unoiled) penguins microchipped for comparative purposes. Similarly, each of the captured dotterels was leg banded to be able to individually identify each bird on release.

Karin Sievwright, a masters student from Massey University, reports that approximately half of all the microchipped penguins have been re-captured in apparent good health, although currently more control birds have been recaptured than rehabilitated ones. Of 59 monitored burrows containing at least one Rena penguin, nearly all parents produced a normal clutch of two eggs, with good hatching and fledging success. These initial results are very positive. Funding for this project was from the Oiled Wildlife Care Network and WWF NZ.

Ornithologist John Dowding has been monitoring the progress of the dotterels. Dowding reports that of the captive dotterels released in late 2011, more than three-quarters were alive a year later. Nearly 90% of the surviving dotterels remained at their original capture site and most of the survivors were paired and breeding again a year after release. The ‘divorce’ rate was relatively low, with many of these birds paired back with their pre-Rena partners. These initial results suggest the pre-emptive capture was justified and would have provided a viable amount of birds to re-establish local dotterel populations had the other dotterels perished.

There is no doubt that the CV Rena oil spill had a dramatic short-term impact on the local wildlife of the western Bay of Plenty. But it is encouraging seeing good survival rates and breeding success of both penguins and dotterels in the first year following the disaster. Despite these early positive results, long-term negative effects on health and survival of both species are possible and monitoring will continue to March 2014.