Dr Declan Patrick is Senior Lecturer at the University of Waikato. He is both an academic and a theatre practitioner who works across performance, dance, and video. For more information about his work see: https://www.waikato.ac.nz/staff-profiles/people/dpatrick

AB: What drew you to Greek tragedy and why did you choose Iphigenia at Aulis?

DP: For me, Greek tragedy is a great way of talking through current issues in society and linking them to what has come before. I chose Iphigenia at Aulis because it speaks in a very direct way to our experience in the West, what will our leaders sacrifice on the altar of their ambition. It also allows us to reflect on how we could resist this, and the trap of overpromising.

AB: How did your students respond to the ancient Greek drama? What challenges did they face in adapting a play that is nearly 2,500 years old?

DP: Students responded very well, to begin with. Later, many had problems with the translations we used (and we explored a variety of translations). Often the language was difficult and formal. It is a very grown-up play, which deals with difficult ideas - tough to resolve when you are 21! I gave the students an assignment early in the process, to imagine the play as a different genre, which helped them contextualise it for themselves. They imagined the play as a Kitchen Sink drama, a reality TV programme, an opera, and a cold case detective fiction. AB: Which translation of the play did you use as the basis of your performance text and how and why did you adapt it? Could you give us an example of how the text was modified?

DP: We used the internet classics archive as the source text for our production, but we changed it substantially. Because we had to adapt to the restrictions necessitated by the pandemic, the project moved from being a physical theatre production to a film, filmed in isolation. As such, the students adapted the text and the ancient drama became a cold case detective play, with each character rewriting their role accordingly, mostly as monologue.

AB: Teaching a group of Theatre Studies students during a pandemic necessitated some radical changes in pedagogy. How did you and your students modify your working practice during New Zealand’s national lockdown and afterwards?

DP: It was incredibly stressful and required a great deal of thinking on my feet. It meant the very basis of the production and the medium had to change. In some ways it was provident, in that it made me move out of my comfort zone. We moved into film production, which is very different from stage work.

AB: Stephe Harrop (University of Hope, Liverpool) and I were asked to provide your students with some context. How did you integrate this into your practice (if at all)? Can the online format introduce a more collaborative model of working and teaching?

DP: The lectures you and Dr Harrop provided were critical to the production. The contextualisation and the academic framework of the play you provided meant the students were able to engage at a much deeper level, and apply the principles discussed (as well as examples of other productions) to their own interpretations. I would love to work that way again, and it is wonderful for students to get the benefit of experts from other places. And of course, I am happy to reciprocate!

AB: How did your working relationship with your group of third year students evolve over the course of the creative process for this production?

DP: It was fascinating as a teacher to see the students who took up the challenge and ran with it, and even those who couldn’t or wouldn’t take responsibility for their own work.

AB: Did you always intend to film the production or was this the result of the pandemic? What do you think you gained by the combination of theatrical and cinematic elements?

DP: No, I didn’t intend to film at all, and was quite resistant at first. We only filmed because there were very few ways forward that I could take during New Zealand’s strict national lockdown. I do think, however, that the final product had some interesting elements combining theatrical and cinematic tropes. I enjoyed using the camera to direct attention and manipulate mood.

The role of Clytemnestra was shared (Waikato, 2020)

AB: The production was available to watch on YouTube for a limited time. Who was the intended audience and why did you choose this dissemination format?

DP: The intended audience were friends and family, and anyone who was interested in this particular production. The students chose this format for several reasons – it mirrors the temporal nature of a live performance, but it is not available to the public in perpetuity. Therefore, the exposure of the student-actors is limited.

AB: Given the restrictions, what was the concept that underlay your choice of costumes, make-up, and props?

DP: Part of this was dictated by cost – and opportunity. Because everything was changing so quickly, the students decided on an aesthetic that could be achieved easily and cheaply (thank you op shops) but that had some clear references, such as the make-up, influenced by David Bowie.

AB: The roles of the main characters such as Clytemnestra, Iphigenia and Agamemnon were shared by more than one student. Could you tell us why that was and what it added to the production?

AB: What was the role of the chorus in your production? Why did you make it a chorus of three?

DP: The role of the chorus became the role of the detective. I cast three actors with a number of references in mind – the three Fates especially. The chorus moved from commenting on the action to directing it, which was a big shift and a challenge for the actors rewriting the script.

AB: Your students and you created a choral song to serve as the opening of your play. Can you tell us how and why you chose to begin your production in this way?

DP: Yes, I commissioned the song from Andy Duggan, who also composed a soundtrack for the play. I wanted the song to draw the audience in, and to set the scene, which I felt it did very well. 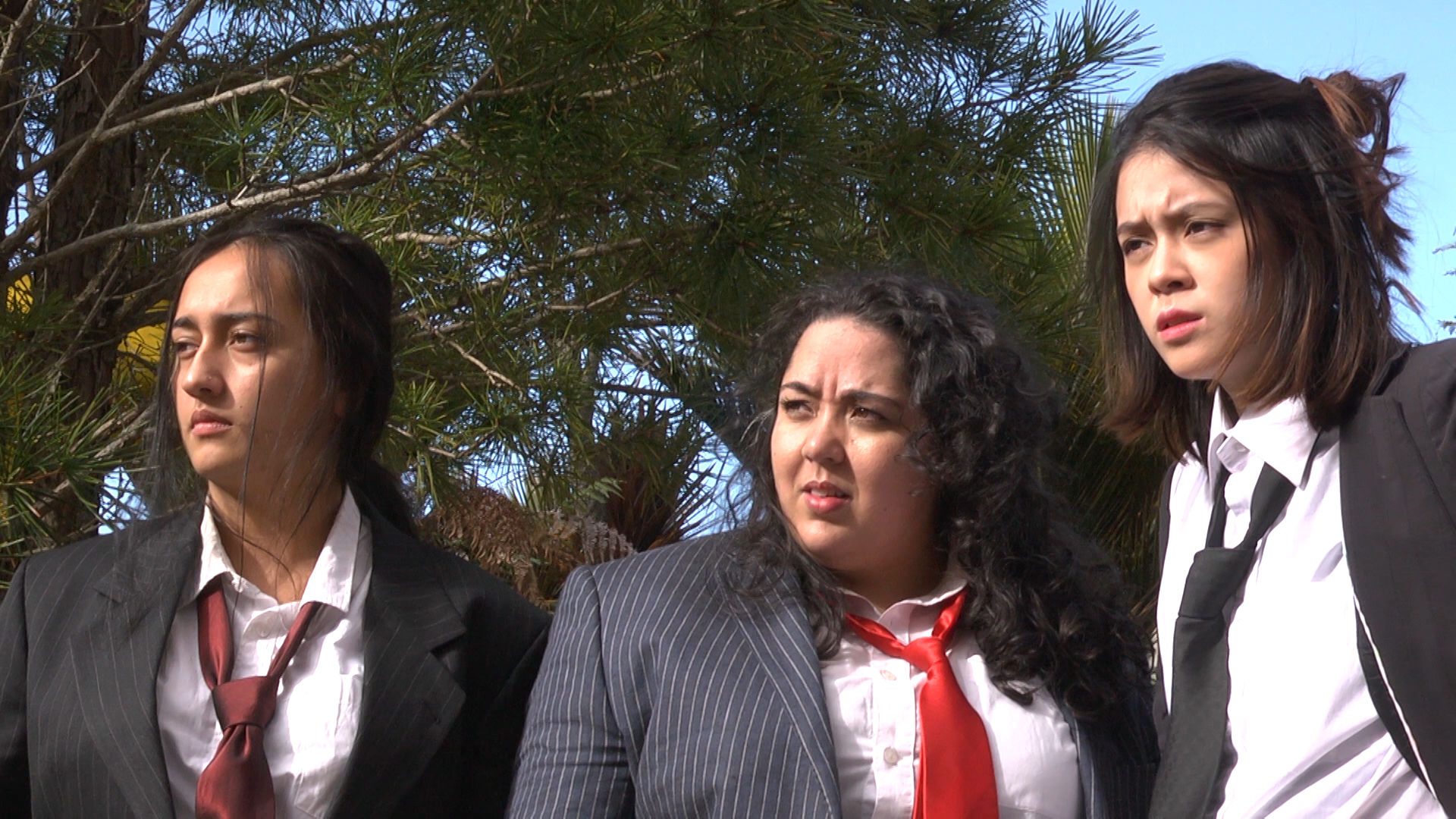 AB: What were the key concepts that underpinned your production? What themes did you want to cover and how did you ensure that your students and audience debated them?

DP: We talked a great deal about accountability and different forms of democracy. And about climate change and generational change. We ended up talking a great deal about the characters of Clytemnestra and Agamemnon and concepts of family and duty. We discussed ways of looking at the past and understanding it, as well as how to apply these lessons to the present. Because these were all present in the play, we couldn’t really help but discuss them.

AB: Would you ever consider selecting another Greek tragedy or comedy as the text for your students’ theatre project? Talk to us about your plans.

DP: Yes, I think students should have the challenge of working with classical texts, and I am currently working on Shakespeare’s As You Like It. I am considering a Greek comedy in the next year or two. No more tragedy for the moment; the world is in a tragic enough state without me adding to it. I’m trying to avoid the lure of Aristophanes’ Lysistrata, but we will see.