Derek was born in Hamilton, New Zealand and fell in love with storytelling at a young age. In 1980 he become the country’s first ever full-time professional storyteller. He toured extensively, both at home and abroad. Derek performed ancient tales, like the Homeric epics, to audiences young and old at a variety of venues. During the 1990s he also co-founded the NZ Storytelling Association. Since 2000 Derek also lectured and tutored at Massey University (Albany campus) and was involved in community theatre projects.

Sadly, Derek passed away on 20 September 2018. His two interviews (the second with Rand Hazou) will remain on our site to honour his memory.

AB: Derek, tell us about your first encounter with the ancient world. What first attracted you to ancient Greece and Rome?

DG:  My fascination with Greek and Roman material began with Nathaniel Hawthorne’s Tanglewood Tales (1853); it was sitting on the shelves at home. Oddly archaic, even though it was written in the nineteenth century, it was from those ‘tangles’ that I first learned the stories of the ancient gods and goddesses. Then there were the Scrooge McDuck comics scripted by Carl Barks in the 1940s through to the 60s and 70s. I vividly remember the time in 1957 when I was ten years old, staying at a health camp by the sea because of my asthma. The nurses would take us older kids to town a few times a month, and one time I bought the comic, The Philosopher’s Stone, in which Scrooge McDuck takes his nephews on a search for the alchemists’ dream. It’s a great adventure story that leads its heroes beneath Knossos, getting lost in the labyrinth and confronting the savage Minotaur. I curled up on my bed in the dormitory, and got lost alongside Theseus in the maze. Another character in those comics is Magica de Spell, who finds the Cave of Circe – surrounded by urns and tablets. Magica exclaims: ‘And in the ruined temples of Boreas, Juno, and the Furies, I scrounged secrets that tell me those gods were more likely live sorcerers than figments of ancient dreams...’. For a child already falling in love with classical mythology this was powerful stuff. Then when I was around thirteen/fourteen I studied Latin, but to be honest it was the stories themselves, as told by our grizzled old Latin teacher, that gripped me the most. I had been reading about the ancient philosophers as well, and when I was eight or nine I drew a map which I called ‘PLATO’. I liked Euclid’s theorems too, and Archimedes’ inventions. 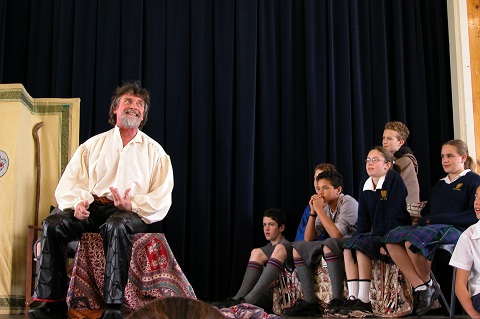 AB: Why do you think it is important to ‘perform’ ancient stories? What extra dimension does performance add that reading cannot offer?

DG: An imaginative reader creates a theatre of the mind, but during a performance, everything is right there, it’s physical as well as intellectual. Characters live, they laugh, they dance, they weep, they become a part of us, the audience. The storyteller evokes distraught Andromache in Book 6 of the Iliad, finding her husband in the streets, returning from battle, and Hector comforting her, and laughing, tossing their child. The storyteller can draw in the audience more deeply. (Watch Derek perform this emotional moment in the video.) Chanting famous lines like ‘over the wine-dark sea’, he/she invites audience members to become kings, queens, singers, gods and goddesses.

A performance charges the air and ignites ancient epic, which flares into a great storytelling arc, illuminating life. The story unfolds in front of us (as it did in front of the ancient audience) through performance. That is the performer’s craft. It’s a dynamic thing, which is taking place just a few metres away. Performance awakens the primal power of the story, and a mysterious energy emerges. There’s this guy shambling into the acting space, a shifty rogue who turns out to be Odysseus, still telling bullshit stories about who he really is even to his poor old dad. There’s the leader of the Trojan refugees, Aeneas, and his friend Achates, bending down deeply moved, to see pictures of themselves with their lives of loss and suffering, cut into the foundation stones of Dido’s new Carthage. We’re sitting watching this in the present, but suddenly the performers in front of us enacting those ancient lives seem to explode and we realise that they are looking directly at us. In that moment our lives turn into something intensely examinable. And it’s raw, flesh and blood, real people before us transmitting the experiences of Penelope, Medea, Electra, Orestes or another character from ancient epic or drama being performed tonight. We feel something has changed as we walk back to our cars. We’ve been transformed.

AB: Ancient Greece and Rome were performance cultures. Telling stories within a performative context was how the ancients understood the world around them and their own relationship to it. What do you think is your role as a modern storyteller?

DG: Storytellers are vehicles who receive and pass on stories from a number of sources. They are in a unique position; they transmit the exciting storytelling heritage of humanity. The art of the storyteller should at the very least bring any story to life, it should sparkle and enchant. But the art also lies in making these ancient mythic stories resonate in our own modern lives, hopefully adding further texture and meaning to what we do. A storyteller sometimes takes on the role of a shaman, a medicine man (or woman), encouraging us to sing or chant, or dance, within the performance space of the story.

AB: A rather tough question I will admit, but do you have a particular favourite from your classical repertoire? Can you tell us why it is your favourite piece?

DG: For me, it’s Homer’s Odyssey. It can hardly be called ‘a piece’ though, since it is a long epic with many separate pieces combining to make up a whole. That’s why I love it. While I tell the basic parts every time, I include different stories in each performance. Some stories get to be referred to, others are fully told. For example, I love to tell the story of Calypso who rounds on Hermes and tells him: ‘You gods are so jealous! Just when I have a man to myself you want to take him away!’ But sometimes I don’t have room to do more than refer to her existence because that day I want to allow more time for the underworld - because it’s pressure of time: whether you have 150 minutes, or 120 minutes, or 90 minutes (more often the case) or 60 minutes for a performance.

AB: How do New Zealand audiences respond to your stories of ancient Greece and Rome? Is age a factor?

DG: Audiences in NZ have responded well; these stories can be hilarious as well as serious – the Judgement of Paris can be very entertaining on stage. Teenagers and adults know more history than a child, so of course they very quickly come to understand the special relationship that New Zealanders and Australians have with Gallipoli, as that region was where we think the Trojan War was fought. The story of Troy, and indeed of Odysseus’ homecoming, is an adult story. That said the epic is so malleable that any audiences of most ages will enjoy the main parts of the story. The Cyclops is a favourite story, also the section of the story not covered in the Iliad, but everyone knew, the Wooden Horse (referred to briefly in the Odyssey). But age matters to this extent: a mature audience will appreciate the nuances and deeper moments – they don’t need the Cyclops to draw them into the narrative.

AB: In your own view, are there any lessons that we can take away from ancient stories?

DG: Yes, indeed. Thinking of the Odyssey and the Aeneid -- you can watch Derek perform the opening of this Roman epic in the second video we recorded-- we learn that it is dangerous to push the boundaries too far, yet sometimes necessary if we are to survive. Dido’s court, in their desire to keep their long borders safe, at first attempt to repel the Trojan refugees from the beaches of Carthage with spears until it becomes clear that their Queen wishes to extend them her hospitality. Virgil dramatically opens the discussion in such a fruitful way that a modern refugee seminar might benefit from. Think, too, of the bewilderment of Telemachos as he watches his parents attempt reconciliation after nineteen years apart. We can learn a lot about hospitality and how important it is to offer it, even or especially at stressful times. ‘Dear to us is the warm bath, clean raiment...’ And how courageous is Nausikaa when, confronted with a naked stranger on the shores of Phaeacia, she stands firm and offers hospitality not hostility, telling her companions not to run away, asking them: ‘Do you think this is some enemy coming against us?’ There is much to reflect on that helps us to understand our own world. We can learn from the many insightful moments offered to us by ancient stories.

AB: Can you tell us a bit more about your plans for the future? Are there any specifically ‘classical’ items in your repertoire that you are hoping to perform?

DG: I’d like to develop the Demeter and Persephone story – it works on many levels, it is life-giving and organic; also the story of Theseus, the Minotaur, the maze and Ariadne’s thread. We live in a world where we constantly struggle for direction – in the opening of Homer’s Odyssey there’s this over-arching desire to find a good direction home – so stories of direction, finding the best way through difficulties, are tools that we need in a modern world caught up in the confusion of lost signposts and a lack of direction wherever home is or may be!