Raemon Rolfe is a New Zealand artist who applies ancient Greek concepts about proportion to bring pictorial harmony to her own work. Her art is informed by her reading of ancient Greek philosophy and classical theories of cosmology and physics. Raemon uses the ancient Greek encaustic medium in her work.

AB: Raemon, your work features ancient Greek, Roman and Egyptian motifs. How did you come into contact with the classical world? What particular course did your personal path of discovery take?

RR: In 1983 I began teaching practical art and art history at Palmerston North Girls’ High School. Art History quickly became a passion and had a major influence on my work. I found the influence of ancient Greek and Roman art and philosophy on the artists of the Renaissance particularly inspiring. I liked applying ancient Greek concepts about perfect proportion, such as the golden section, to achieve pictorial harmony in my own work. In 2008 I made the decision to leave teaching and commit myself full-time to the making of art. GS: I came across your work when I read an article in the local paper about a presentation you organised to demonstrate the ancient technique of encaustic. Can you tell us more about what is involved?

RR: Coming down to us from ancient Greece, encaustic may be the earliest form of easel painting. It involves melting beeswax with damar resin and adding pigment. The molten paint is applied to a wood panel and each layer is fused with heat, (enkaustikos is from the Greek word for ‘to burn in’); in ancient times a piece of red hot iron was used but now we use a hot air gun or blow torch. The texture left by the instantly drying brush strokes can be retained or smoothed by scraping or melting. The surface can be incised and worked on with other media that are then heat fused into the wax. Encaustic has wonderful luminosity, depth and materiality and can be buffed to a rich sheen without the need for varnish or glass to protect it: encaustic is its own protector and can last for millennia as the Fayum mummy portraits of ancient Egypt can testify.

Greek artists were painting with encaustic as long ago as the 5th century B.C.E. when ship builders used beeswax and resin to seal the joints and waterproof the hulls of their vessels. Pigmenting the wax gave rise to the decorating of warships, a process which after further refinements was used for painting onto panels, statues, ceramics, and architecture. Before the eruption of Vesuvius in 79 C.E. the artists of Herculaneum and Pompeii were painting most of their murals with wax, using a process called wax emulsion or Punic wax. Pliny the Elder described the process as boiling beeswax with salt water and potassium carbonate, and then bleached by the sun, leaving the wax a paste consistency.

GS: Your palette is inspired by the ancient Greek artists’ use of colour. Can you tell us why you find this restrictive range attractive?

RR: The restricted palette of ochres, oxides, black and white is based on the ancient Greek four-colour palette (the tetrachromatikón) that was also used by the earliest icon painters up to about 800 C.E. To provide other contrasting colour notes to this palette I use the verdigris patina on copper, oxidised iron, gold, silver, steel, sand and ash. I like to give the viewers a field of colours, textures and forms to travel across.

The media such as encaustic wax, earth pigments, resins, metals and castings of man-made and natural forms all add to the message of the work. I used letterpress to include passages of text, including ancient texts. For inspiration I looked at ancient Greek art and early Greek and Russian icons; I like the compositions, the mystery and the way time has textured the painted and gilded surfaces.  Other influences come from the work of Jasper Johns, particularly his encaustic paintings, his use of castings, and his bronze reliefs, and from Antoni Tapies and Anshelm Kiefer whom I admire for the way they use earth materials and restrained colour palettes.

AB: How does your reading of ancient philosophers inform your artistic output?

RR: For the past few years I have been exploring ideas relating to the nature of the universe and our place in it, drawing ideas from current cosmology and from texts written by philosophers of antiquity. I read about the atomist theories of ancient Greek philosophers such as Democritus and Epicurus from 2400 years ago.

Last year I discovered Titus Lucretius Carus’ astonishing book De Rerum Natura (On the Nature of Things) written in the last century B.C.E. In a series of poems Lucretius explains particle physics, as ancient Greek philosophers such as Epicurus had understood it 500 years earlier. Epicurus believed an understanding of particle physics was the secret to a happy life! Lucretius’ highly controversial book was rediscovered, translated, circulated and discussed in secrecy during the Renaissance and was to have a major impact on the development of modern scientific thought. In Book I, Character of the Atoms Lucretius notes how all things are very slowly made but can be very quickly destroyed:

For, lo, each thing is quicker marred than made;
And so what'er the long infinitude
Of days and all fore-passed time would now
By this have broken and ruined and dissolved,
That same could ne'er in all remaining time
Be builded up for plenishing the world.
(Translation, W. E. Leonard)

These lines seem very relevant today as forests, soils and waterways are ‘marred’ in ways that threaten the capacity of the planet to support life. My series of works in After the Trees explore this theme. Lucretius’ controversial poem disappeared until around 1500 C.E. when it resurfaced in Italy in the Renaissance and was enthusiastically discussed in secret; Giordano Bruno was burnt at the stake in Rome in 1600 for holding such beliefs. Lucretius’s book however was to have a major influence on the development of modern science. GS: Letters from the Greek alphabet appear again and again in your artwork. Can you tell us why and what is their function?

RR: Ideas such as the particle nature of matter and our relationship to the cosmos have interested me for many years. Several books have fed my growing interest in cosmology, particularly in the deep forces that shape the universe and how the evolution of life on at least one planet was dependent upon the perfect balance of these cosmological forces. A new series of paintings was the result. I also read about the atomist theories of ancient Greek philosophers such as Democritus and Epicurus.

More specifically, I use the Greek letters ε, Ω and λ in my work:

I discovered these letters when I read Martin Rees’s book Just Six Numbers: The Deep Forces That Shape The Universe (1999). These are three of the six numbers that Rees believes ‘constitute a ‘recipe’ for the universe’; they relate to the size and matter of the universe, how long it will last and the properties of space itself. This is how he defines these three…

ε – epsilon defines how firmly atomic nuclei bind together and how all the atoms and therefore the chemistry of the earth was made. If it had a value that was lower, there would be no other elements, only hydrogen, so no periodic table - no life. Had it been a bit higher, protons would have fused in the big bang, so not even any hydrogen!

Ω - omega measures the amount of material in the universe and tells us the relationship between gravity and expansion energy. If it were to vary from unity by more than one part in a million billion, the universe would not still be expanding 13.7 billion years on from the Big Bang: if it were a higher value, it would have collapsed long ago; lower and no galaxies or stars would ever have formed.

λ – lambda is the weakest and most mysterious of forces. This cosmic ‘antigravity’ controls the expansion of the universe and so seems to dictate the whole future of the universe. Fortunately for us it is very small, otherwise cosmic evolution would never have got started. 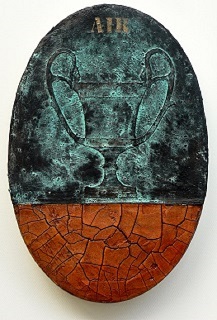 AB: Ancient vase shapes appear again and again in your work. Why do you find their shapes so pleasing?

RR: I like to use their beautiful rounded feminine forms and clay bodies as a metaphor for Earth and the need to look after it. Greek vases contain and protect as long as we look after them. Sometimes I give the vases cracked surfaces to suggest their fragility and therefore the fragility of the planet’s ability to sustain life, as we know it.

GS: In addition to the Greek and Roman models that you use in your work there are also some Egyptian motifs such as pyramid shapes and scarabs. What is their role?

RR: I’ve read several books presenting various theories, some mystical and some mathematical that explain the form and function of the pyramids and obelisks. Making paintings about these ideas is a way of thinking about them and helps me to deepen my understanding of them.

AB: These classical connections are deeply embedded in your work and your approach to making art. So is it safe to say that you will continue to use them in future work?

RR: Yes, definitely; I’m currently planning new work inspired by theories of time and space from the classical past and modern scientific thinking in this area. Both argue that time itself does not exist. I’m interested in the theory that the modern concept of linear time originated in ancient Greece with the introduction of the written alphabet, only to disappear during the Dark Ages and to re-emerge during the Renaissance with the development of letterpress printing and the resulting spread of literacy.