150th anniversary of the Arica tsunami on Chatham Islands

On August of this year, a party of JCDR researchers and GNS Scientists, including David Johnston, Kristie-Lee Thomas, Lucy Carter, Emily Campbell, and Hamish Campbell, travelled to the Chatham Islands to help mark and memorialize the 150th anniversary of the 15 August 1868 tsunami which was triggered by the Arica Earthquake (magnitude 8.5 – 9.0; 14 August 1868), and significantly impacted the Chatham Islands with loss of life.

It is also estimated that a large N-S oriented fault ruptured the sea floor off-shore of Arica along a length of some 600 kilometres causing colossal loss of life along the coasts of Peru and Chile, estimated at 25,000. The resultant tsunami crossed the Pacific Ocean and arrived many hours later in the early hours of 15 August 1868, impacting initially in the Chatham Islands, some 800 kilometres SE of Wellington. One man named Makere lost his life in the Chatham Islands but anecdotally it is said that at least 20 more Māori lost their lives. This event is of particular significance in New Zealand because as far as we know these are the only recorded fatalities to tsunami in our history.

Recent research investigating the 1868 tsunami and its impacts on the Chatham Islands by Kristie-Lee Thomas and development of new tsunami evacuation zones provided a timely opportunity to organise a memorial event to commemorate the 150th anniversary. The memorial event was organised with the Chatham Islands Emergency Management Office and Ngati Mutunga o Wharekauri Iwi Trust with the aim of using the occasion to:

In preparation for the event, A5 sized flyers were created with tsunami facts and key evacuation messages (seen below). These were designed as take-home resources that people could place on their fridge at home as a memento of the event and also a preparedness guide. The messages included on the card were consistent with the Ministry of Civil Defence and Emergency Management (MCDEM) national messaging and specific advice for the Chatham Islands community. The messages were also consistent with evacuation boards to be erected on island.

The anniversary was commemorated by travelling to Tupuangi to acknowledge the impacts at this location and to say a karakia for the lives lost here. This would be followed by Kai (sausage sizzle), to abide by Tikanga. Following kai, there would be korero around how the community could be prepared for a future tsunami. Physical resources were distributed during the memorial. Copies of the story in the Chatham Islander newspaper, the post card flyers and evacuation zone maps were handed out to participants who attended the memorial. Left over post card flyers were left at the hotel for locals and tourists alike to take home.

Originally, the memorial was scheduled on the Wednesday 15 August, the day the tsunami struck (1:00am Chatham Islands time), but was rearranged to Tuesday to accommodate a Tangi and a teacher strike on the Wednesday when all schools shut. This allowed for the acknowledgement of the moment the earthquake truck in Arica (10.15 am Chatham Islands time) and to discuss tsunami travel across the Pacific Ocean as the bus travelled to the site worst impacted.

This memorialisation event was most successful in all aspects and had excellent outreach to promote tsunami awareness and preparedness. Approximately 30 Chatham Islanders joined us on Tuesday morning to commemorate the anniversary incuding Kaingaroa School. Following the memorial and korero with community members the team travelled to Te One School, where they addressed 40-50 pupils plus teachers.

Feedback from participants of the memorial indicated they learned a lot from attending and enjoyed the day. 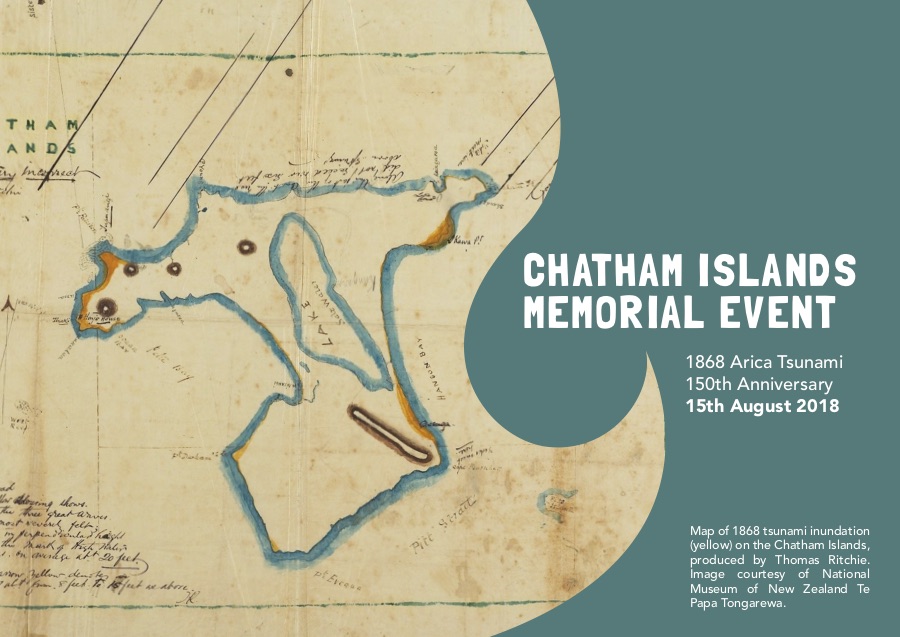 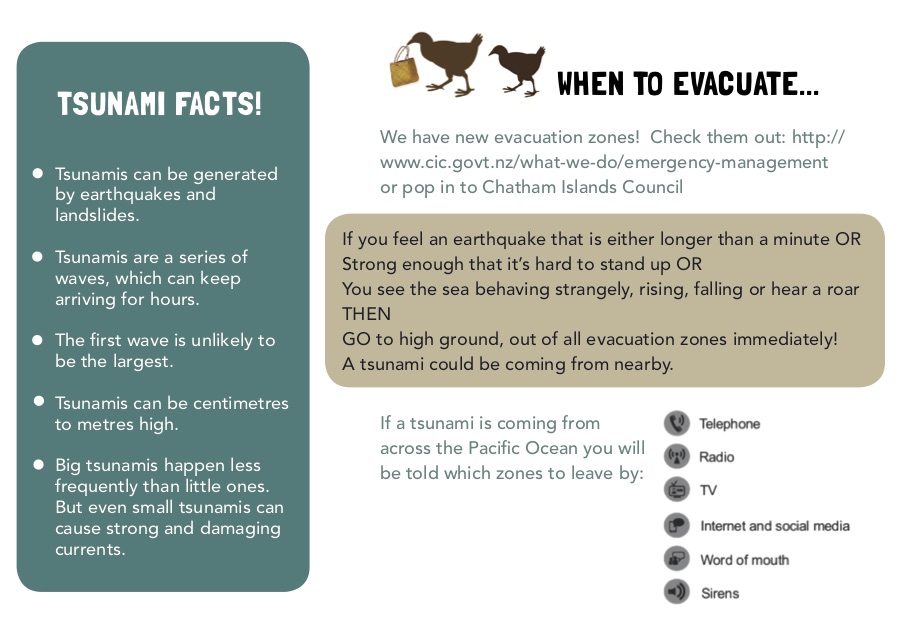 Event flyer distributed to attendees (back) 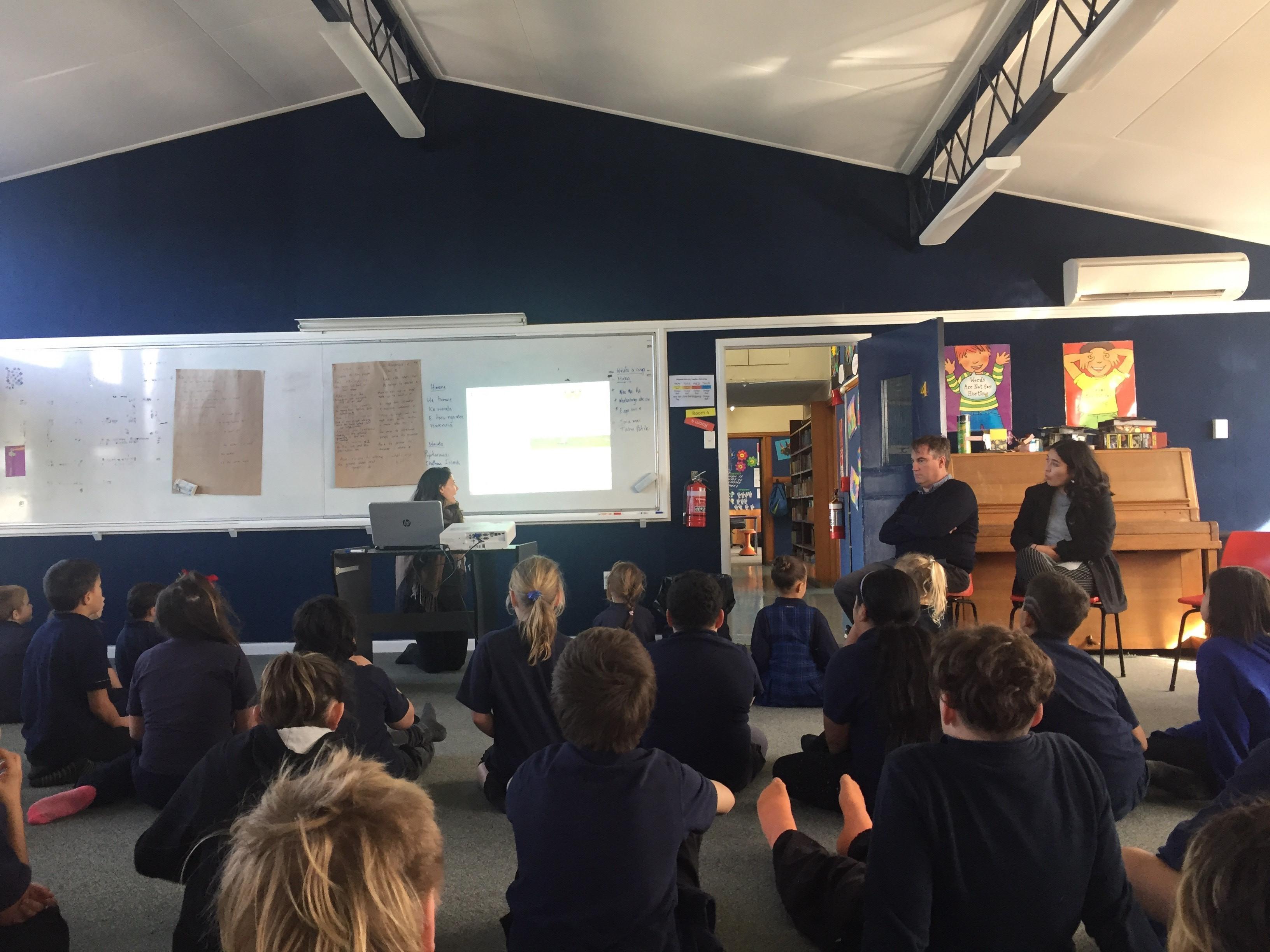 Kristie-Lee presenting to students at Te One School