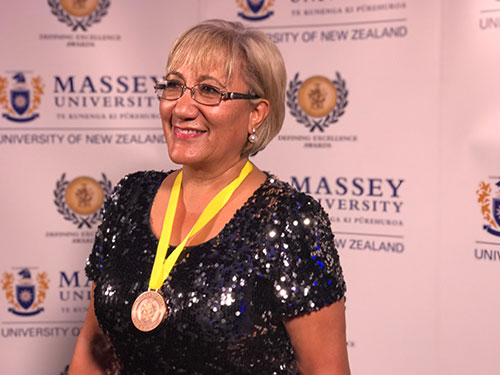 With growing accolades to her name, and a lengthy history in agri-business, 61-year-old Mavis Mullins is nowhere near done yet.

A mother of four, and grandmother to 14, Mavis is a fifth-generation farmer. She and husband Koro purchased the family shearing contracting business that dated back to her grandfather, the 1920s All Black Lui Paewai.

In 2002, she was made a Member of the New Zealand Order of Merit. Last year she won the Rural category at the Westpac Women of Influence Awards, and will be inducted in to the New Zealand Business Hall of Fame in July. The extensive list of achievements goes on.

With many notable achievements in her career and over twenty years’ experience in governance in public and private enterprises she has become a well-known and respected leader within the wool and agribusiness sectors and on the international business stage.

In the late 1990s Mavis was appointed to the board of Landcorp, where she held the role for seven years. Since then she has been a member of the Mid-Central and Wairarapa District Health Boards and the Massey University Council. Her past governance roles have included 2degrees Mobile and Aohanga Incorporation, and she currently chairs Atihau Whanganui Incorporation, Poutama Trust, Rangitane Tu Mai Ra and Taratahi.

So what drives her to keep up such a busy portfolio of work? With four adult children, her focus is now on making a better world for her mokopuna. “Better options, better opportunities, better outcomes. It’s not about me, it’s about how we make a better footprint for the generations that are coming. How we make NZ Inc, or New Zealand Aotearoa a place that has meaning and relevance in a global context. I love that kind of thinking,” she says.

Mavis, who graduated with a Master of Business Administration from Massey in 1996, says her business-mind began working at a young age.

“Being Māori, we all have some whakapapa to land somewhere, and with that you are often a beneficiary or shareholder in a land block, so going to those meetings, understanding the connection between culture, politics and commerce is kind of instilled at quite an early age, but it’s something you don’t appreciate at the time. For me it’s been about some of those cultural values that work so seamlessly, being utilised in a commercial context. It’s been easy to recognise this as New Zealand increasingly does business in Asia. Understanding the cultural imperatives to build the commercial relationship on top of that. The value of my MBA was that it gave me the language of business, a global language. I already had the cultural understanding. Together these can be powerful business instruments.”