Generations of staff and students have laid the foundations for Māori @ Massey. 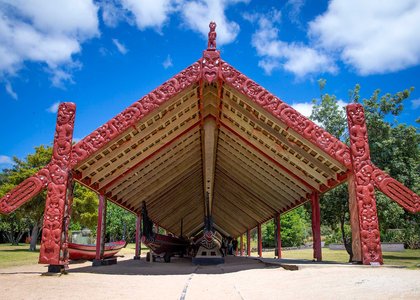 Dr Ephra Garrett was appointed as a lecturer at Massey. Dr Garrett ran the university’s first Women’s Studies course in 1978 and, with Merv Hancock, founded the Bachelor of Social Work programme in 1987. She built a Māori dimension into teaching and research in the Departments of Social Work and Psychology.

Massey opened its Department of Social Anthropology and Māori Studies, under the leadership of Professor Kāwharu. Its first two courses were Introductory Māori Language, taught by Apirana Mahuika, and Introductory Culture and Society, taught by Te Pakaka Tawhai.

Emeritus Professor Sir Ngātata Love was appointed Senior Lecturer in Management. He went on to become the Faculty of Business Dean from 1985 to 95, and was knighted for his services to Māori in 2008.

The university unveiled its first Māori artworks: four tukutuku panels woven by the Tawhai Whānau for the Department of Social Anthropology and Māori studies.

Te Kupenga o Te Mātauranga Marae opened on the Hokowhitu campus. It was the first marae to be established in any tertiary education institution.

Māori Studies became available as a major in the BA degree.

Massey held its first ceremony to honour Māori graduates, on the Manawatū campus.

Wellington Polytechnic opened Te Kuratini Marae. When the two universities merged in 1999, the marae became a centre for Māori students, and for formal university occasions like graduation ceremonies.

The university launched its Master of Māori Studies degree.

Professor Chris Cunningham created the Te Pūmanawa Hauora research programme in Māori health. The programme is still running today, and is involved in a number of major research projects and collaborations.

The School of Māori Knowledge published the first edition of "He Pukenga Kōrero, A Journal of Māori Studies".

Professor Arohia Durie was appointed to lead Te Uru Māraurau, the School of Māori and Multicultural Education. Alongside Professor Huia Jahnke, she led the development of a groundbreaking Māori-medium teacher education degree programme, Te Aho Tātairangi. In 2001, she became the university’s first Professor of Māori Education.

The Minister for Māori Affairs, MP Rana Waitai, opened the new Te Pūtahi-a-Toi building on the Turitea campus. Built to reflect modern Māori design and symbolism, the building was a home for the Department of Māori studies. It also fulfilled many of the functions of a campus marae.

In 2000 more than 3000 Māori students were enrolled at Massey, about half studying in distance programmes.

Professor Helen Moewaka Barnes set up Whāriki, to conduct interdisciplinary research and evaluation in a variety of health and social topics.

The university launched its cyber portal for Māori doctoral students.

Te Rau Whakapūmau beat its target to support 25 Māori PhDs in a decade by 15, as Massey’s 40th Māori doctoral student completed their programme.

Sir Mason Durie was appointed Deputy Vice Chancellor – a position he held until his retirement in 2012.

Seven digitally-polished, bead-blasted stainless steel pou were erected on the Albany campus. The artwork draws on the legend of Maui’s search for knowledge, and each pou represents a step in the education journey.

Naomi Manu established the Pūhoro STEM Academy programme, the first of its kind in New Zealand. The academy, run with support from Te Puni Kōkiri, supports young Māori students to study Science subjects from Year 11 through university and into their careers.

Professor Jan Thomas was welcomed to Massey as Vice-Chancellor of the University.

Toi-te-Ora Wharekai opened at the university’s Manawatū campus, with the facilities to give manaakitanga to more than 100 visitors at a time.

Associate Deans Māori were appointed to each of Massey's 5 colleges, to champion and support the success of Māori students.

An Honorary Doctorate was bestowed to Doctor Manahi Paewai – the first to be bestowed at the Celebration to Honour Māori Graduates.

An unprecedented number of Māori academic promotions were announced, with 2 new professors and 7 associate professors created.