Associate Professor Dennis Slade is retiring this week, after an illustrious 50-year career as a physical education teacher and coach educator.

Associate Professor Dennis Slade’s 50-year career as a Physical Education (PE) Teacher and Coach Educator was celebrated at a function at Wharerata on the Manawatū campus. Dr Slade is retiring from Massey this week.

His teaching career began in 1972 at Gisborne Intermediate Normal School. Dr Slade then taught at Palmerston North Boys’ High School before becoming Head of Department at Awatapu College for a decade in the 1980s. After lecturing at the International Pacific College in the early 90s, he joined Massey Teachers’ College in 1995.

"Dennis’s contributions and reputation as a teacher and developer of creative and credible ideas in his specialist field of TGfU are renowned and his doctoral study is a culmination of a lifetime of personal and professional learning, researching, developing and delivering in his field."

A special edition of the Physical Education New Zealand (PENZ) Journal followed, focused on the Development in the Teaching of PE in New Zealand, where Dr Slade contributed all of the edition’s articles.His significant and numerous scholarly contributions to the journal, and innovative PE teaching practice,were subsequently recognised by the prestigious award of Fellow of Physical Education New Zealand, with the following citation:

"Dennis is a highly respected academic and a productive researcher in the field of GCL, TGfU and PE. His contributions have been underpinned by a strong belief in the value of teaching and the value that games-sense learning can bring to the education of young people."

Dr Slade’s Massey colleagues have also highlighted his significant teaching contribution, research leadership and graduate legacy of hundreds of PE teachers nationally. School of Sport, Exercise and Nutrition Lecturer Dr Andrew Grainger says Dennis is a leader across all aspects of research and teaching in his field.

“His contributions have been widely acknowledged by his peers across Aotearoa and globally… As he looks to other things, I can't imagine the hole it will leave in the department, the college, and university. More than anything, you could contact anyone of Dennis' students, and you will see the evidence of his pastoral care and intellectual influence the length and breadth of the country," Dr Grainger says.

Head of the School of Sport, Exercise and Nutrition Andy Foskett says, “Dennis has been a leader within the PE sector for many years and will be exceptionally difficult to replace (if not irreplaceable). He is currently Vice-President of Hockey New Zealand, has coached and played for many Massey hockey teams and took a leading role in the development of the new hockey turf on the Manawatū campus. Dennis has not only been recognised for his teaching, scholarship and leadership at Massey, but is acknowledged globally for his significant contributions.”

Internationally recognised physical educator Rod Thorpe of Loughborough University, England, who was co-author of the original TGfU model/paper in 1982 and visited Massey in the mid-1990s, observed Dr Slade’s innovative teaching practice in Melbourne, at the TGfU conference in 2003.

“I was drawn to a practical session that seemed to have attracted a larger than normal audience. Iwandered over to watch. In watching sessions on my area of interest I rarely get excited. This time I did. Not only was Dennis embracing key concepts of the model, but he was extending the ideas by the games he had designed and the questions he posed. He had also produced a CD-ROM resource. Simply, it was the best practical interpretation of the ideas embraced in TGfU that I had seen and remains so,” Mr Thorpe says.

“You can take satisfaction from knowing people who work in the area of your professional life value what you have achieved. The joy is, even after retirement, you will be able to continue helping people enjoy and achieve.”

Associate Professor Dennis Slade, from the School of Sport, Exercise and Nutrition, has been elected to the position of Vice President of Hockey New Zealand. 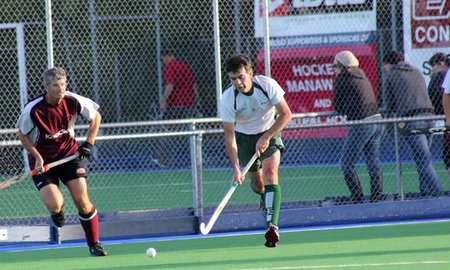 Associate Professor Dennis Slade received the rare distinction of being made a Fellow of Physical Education New Zealand, at the recent annual conference in Wellington. 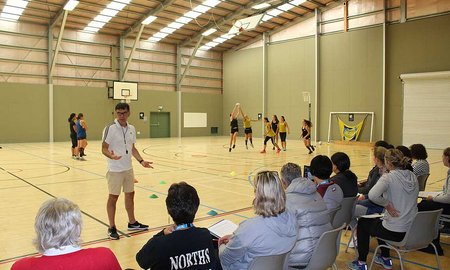