All academic journeys are unique but for Dr Herbert Sima, his higher education journey has been one of true endurance through a multitude of barriers.

Dr Sima grew up in the small village of Zhong Chang in the Hubei Province of China, far removed from any of the modern conveniences many take for granted in their day-to-day life. There was no power or clean water, and very little in the way of infrastructure, resulting in muddy roads during the rainy seasons. The village rooster was used to keep time and wake families up each morning, as clocks and watches weren’t a common possession.

With buses and cars being inaccessible, Dr Sima and his peers would make the 12km walk to and from his intermediate school every week. The poverty in the village was so severe that many of the children in the village were unable to carry on learning after finishing intermediate.

However, Dr Sima was determined to continue his education. The motivation that saw him walking the many miles to school in his youth formed his work ethic and drive, leading to him pursuing higher education after moving to Aotearoa New Zealand in 2000.

Dr Sima’s academic career with Massey spans more than two decades, beginning with a Bachelor of Business (Marketing) in 2000. He began as a full-time student, before shifting to part-time study to balance study and work commitments when he took up a full-time job to support himself. He went on to do an honours degree in 2004 and a master’s degree in 2005, both via part-time study.

Following this, Dr Sima and his wife began a daycare business, with six centres and 70 full-time employees in Auckland and Hamilton, which they ran for almost ten years. He says this endeavour was significant to him, as he believes a strong foundation of learning at the beginning of a child’s life could make all the difference as they grow older.

In 2015, Dr Sima enrolled as a part-time PhD student with a focus on marketing. While thrilled to get his doctoral studies underway, a series of family issues meant he had to suspend his studies twice for a total of 18 months.

Dr Sima says it wasn’t easy to find the strength to carry on through his personal and academic pressures, but knew that the reward of completing his studies would be worth it.

“During my PhD studies, my wife was diagnosed with breast cancer twice, and my father passed away. I almost gave up but managed to overcome all the stresses and emotions to successfully defend my PhD thesis in May this year. This was such a special moment in my life.”

Now graduated, Dr Sima has taken up a role as the Group Subject Lead in Marketing at the University of Auckland Business School. In this role, Dr Sima is the Course Director of Advancement Marketing Strategy, an undergraduate coordinator for the Marketing Department, and teaches a series of courses that sees him enlightening the minds of the next generation of marketing students.

While Dr Sima has broadened his tertiary environment, he says he will always consider Massey his second home.

“I have established a very strong relationship with Massey, and I remain in touch with my lecturers from 20 years ago. I believe this comes from the family-orientated environment of the university, and the support offered. I received so much support from the Marketing department on the Auckland campus and would like to extend my thanks to everyone there.”

Dr Sima said it was his supervisors who were driving forces in helping him achieve his studies.

“My two supervisors, Associate Professor Henry Chung and Dr David Liu, are both incredible and I can’t thank them enough. During the darkest period of my PhD studies, Dr Chung in particular offered me so much strength and encouragement, and went above and beyond. I probably would have withdrawn from my PhD studies if it wasn’t for his support and care.”

He was also grateful for the overwhelming support and love he received from his family, including his wife Jessy, his children Aubrey, Clara, and Nathan, his brother Jinwen and sister-in-law Huang Lin, his sister Jinyu and brother-in-law Xinyou Li who live in China, and his mother Zhufeng who still lives in the village, where the conditions have improved since Dr Sima’s childhood. Dr Sima returns when he can and has helped facilitate the installation of infrastructure and a telephone within the village.

Looking to the future, Dr Sima endeavours to continue offering inspiration, guidance, and support to his students as his lecturers and supervisors did for him, as well as to work with commercial and not-for-profit organisations to provide strategic support.

He also intends to write a book to record his life experience, apply his PhD knowledge to improve communities on a national and international level, and to experience more in his personal life including spending more time with his children, family and friends, and getting into social tennis.

Aotearoa New Zealand’s population is ageing, yet little has been known about how ageing impacts consumer behaviour. 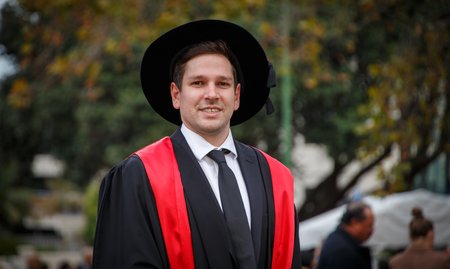 At 85 years old, one would think Margaret Stefanitsis would be relishing a quiet retirement without the pressure of deadlines and research to worry about but she has a different path in mind. 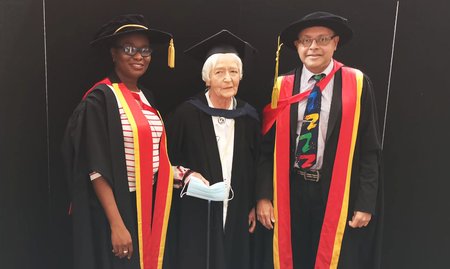 Changing the narrative around gendered violence, one meal at a time

For 65-year-old Dr Anthony Mattson, his academic journey has been, in his own words, the loose thread he kept tripping over for 40 years.