Wheels up for Wings recipients

The 72nd and 73rd cohorts of Massey’s School of Aviation have just celebrated getting their commercial pilot’s licences, also known as their ‘Wings’.

The School of Aviation’s Wings ceremonies take place as each cohort completes the flight-training component of the Bachelor of Aviation (BAv) degree. For most, getting their commercial pilot’s licence, or ‘Wings’, is just as significant as their graduation ceremony.

This time, two ceremonies were held for earlier cohorts whose original events were disrupted by COVID-19 restrictions.

Bayley Bennett of Queenstown was awarded the School of Aviation Outstanding Student Award for the 72nd cohort. He fondly recalls the pre- Commercial Pilots Licence (CPL) navigation flights, particularly the solo components, and Instrument Flight Rules (IFR) flights to Taupō, Whakatāne, and down the West Coast.

Bayley has just completed the Flight Instructor Course and hopes to find employment as an instructor and eventually fly something bigger.

Harry Clark of Tauranga was awarded the School of Aviation Outstanding Student Award for the 73rd cohort.

Harry says he developed a keen interest in aviation early on, and after a move to Auckland he joined the local Air Training Corps cadet unit, where he was able to join their national gliding course and receive a proper introduction to the air.

In 2023, Harry is pursuing his interest in aircraft design and engineering by studying towards a Bachelor of Engineering majoring in aeronautical design at the University of Canterbury.

Harry also received the Air New Zealand Flying Award, as did Benjamin Griffin from the 72nd cohort. This award recognises students who have achieved excellence in the field of aircraft operations and have demonstrated a very high standard in all flight test examinations contributing to the issue of the CPL and Instrument Rating.

Several other students achieved special awards, including Ming Chu of the 72nd cohort, who received both the Airways Corporation Academic Award, for the highest grade-point average in the compulsory papers of the Air Transport Pilot major of the BAv, and the Fieldair Engineering Ltd Aviation Systems Award, which is presented to the student who has demonstrated a high level of enquiry especially regarding the operation of aircraft systems.

Chung Leng Ngor received the Airways Corporation Academic Award for the 73rd cohort, as well as the Hugh Francis Navigation Award, which is awarded to the student who scores the highest aggregate mark in navigation academics and navigation practicum during parts one to four of the BAv.

Kate de Lautour, the only female student across the two cohorts, was awarded the inaugural Zonta Club of Manawatu Aviation Award in Honour of Amelia Earhart. This award recognises exceptional female aviation students who exhibit the key professional attributes of the BAv programme.

The guest speaker at both ceremonies was Wing Commander Richard ‘Dicko’ Beaton, who has served in the Royal New Zealand Air Force for 25 years and is currently the Operating Airworthiness Authority (OAA) for the New Zealand Defence Force.

He spoke about the common thread that many of the students had of developing an interest in planes and flying from a young age. “Flying is a love, an addiction. Once it’s in your blood, it’s there for life.”

He also shared some of his own experiences with the audience, from which he imparted the lessons ‘trust your crew’, ‘always look after your crew’, and ‘use your crew’.

School of Aviation Chief Executive Officer Ashok Poduval ended the proceedings by speaking of the opportunities now presenting themselves in the aviation industry. “There’s a pent-up demand for travel that now has to be met. So, remain prepared. Luck is where opportunity and preparation meet.”

The 71st cohort of Massey's School of Aviation have just celebrated getting their commercial pilot's license. 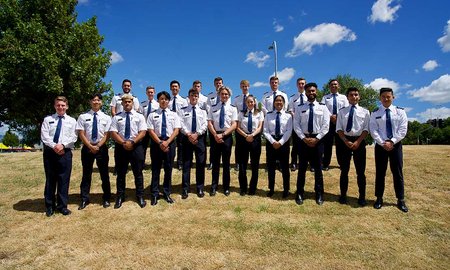 The ceremony was streamed online to family and friends not being able to join due to COVID-19 restrictions. 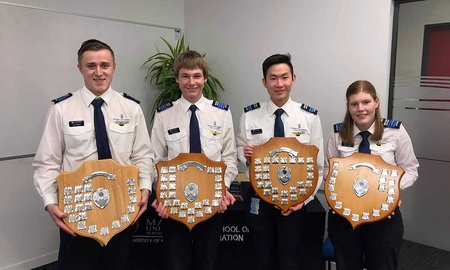 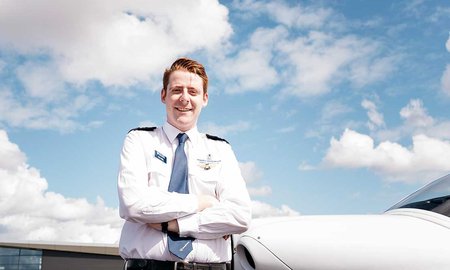