Most NZers enjoy good health as they age: report 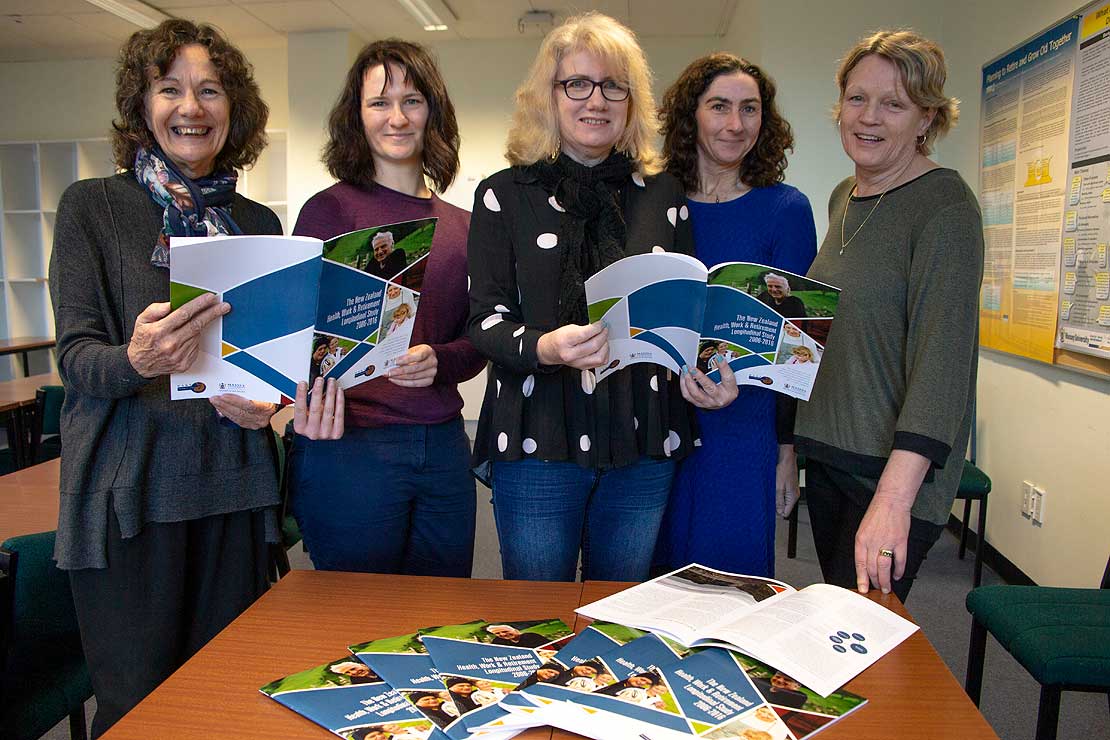 Most New Zealanders are doing well in terms of health and wellbeing as they age, challenging the idea that health inevitably deteriorates as we reach retirement years, say Massey University authors of a new report.

The report, launching August 1, captures a decade of observations on the health and lifestyle experiences of older New Zealanders, revealing that two thirds of those surveyed enjoyed good physical, mental and social health over ten years of follow-up.

Access to affordable, quality rental accommodation for older people on lower incomes, and discrimination of older workers are among concerns raised in the report.

Professor Christine Stephens and Professor Fiona Alpass, from Massey’s Health and Ageing Research Team (HART), have led multiple studies of the health and wellbeing of New Zealand’s ageing population. Results of their research – the New Zealand Health, Work and Retirement longitudinal study – indicate that experiences of health and wellbeing with age are determined not only by individuals, but also the wider social and environmental context in which they age.

Over 10 years, they have conducted six biennial surveys tracking participants who were aged 55 to 70 in 2006 on measures of their experiences of health and wellbeing, social engagement, and employment and economic participation. Each survey had a special focus, including use of technology, caregiving responsibilities, and housing.

While the report paints a generally positive outlook for many as they enter retirement age, it also signals areas of concern, such as access to decent housing for those on lower incomes and with poor health, and ageism in the workplace as more want to keep working beyond retirement age.

It emphasises that those in poorer physical, mental and social health have more difficulty with housing. “These groups need the most policy attention and also highlight that not all old people are rich baby boomers,” Professor Stephens says.

Older new Zealanders in rental accommodation with poor health are increasingly vulnerable and in need of better care, according to the researchers. The authors pinpoint changing home ownership trends as a source of concern for the future.

“Although home ownership is high and culturally valued in New Zealand, the ability of any person to own a home is rapidly decreasing,” the report says. “A person’s long-term health and social wellbeing has some relationship to the quality of their housing as they age.”

“The gaps in psychological wellbeing between home owners and tenants became worse over time. This suggests that older people in New Zealand who do not own their homes are at greater risk of mental health decline,” the report says. “It is apparent that poor housing and lack of secure housing will contribute to greater health declines.”

The participation of older New Zealanders in the workforce has been rapidly increasing over the past three decades, the report says, with employees in the 65+ age group almost trebled from 1986 to 2006.

A greater number of older people in 2016 were registered as job seekers than those aged 18 to 24 years – a reversal of the figures from five years earlier. Some of these job seekers are forced out of work through redundancy, disability or family care obligations, as well as age discrimination.

The authors say that recognising the contribution of older New Zealanders to the workforce is “critical.”

“Enabling and supporting workforce participation by older workers will provide a “triple dividend” for New Zealand: it will benefit the economy by reducing social expenditure for early workforce exit while increasing revenue from taxes; it will benefit business by moderating the impact of demographic change on the labour market; and, it will help older workers through improved wealth and wellbeing,” the report says.

“People are more likely to age well, in terms of ageing with good physical, mental and social wellbeing, if they also report higher economic wellbeing, satisfying and higher status work, home ownership, and housing satisfaction,” says Professor Alpass. “Attention to the living environments of more vulnerable groups of older people will contribute to healthy ageing for all New Zealanders,” she adds.

Snapshots and a panorama of ageing in NZ

Information from the study is provided by a diverse, randomly-selected cohort of older people from the electoral roll, “so that the findings from our studies represent a wide range of New Zealanders,” the researchers say. The study also set up a Māori Advisory Group and over-sampled for this sector of the population to ensure sufficient data was gathered.

Since 2006 the study (supported by funding from the Health Research Council and the Ministry of Business, Innovation and Employment) has involved over 11,000 participants in over 24,000 postal surveys and 1,903 face-to-face interviews. Over 800 have recently participated in a telephone interview on life conditions and events over their life history. Data and findings have been used for evidence-based government policy, community consultation as well as public awareness and debate.