Caption: Professor Bob Jahnke in his workshop putting the finishing touches to his Waiheke Island sculpture Kaokao, which will be on show until February 19. The neon lighting in the foreground gives a sense of how the people can see the reflections from a distance. 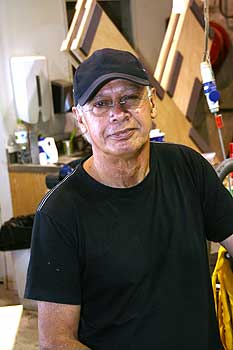 It's extremely apt that Māori artist Bob Jahnke enjoys working with neon following a year where his productivity has earned him the right to have his name up in lights.

Last year as well as 2015, was punctuated with numerous exhibits and preparing new works amid celebrations for the Bachelor of Māori Visual Arts degree he founded at Massey University more than 20 years ago.

The pace that Professor Jahnke (Ngāi Taharora, Te Whānau a Iritekura, Te Whānau a Rakairo o Ngāti Porou) set in 2016 looks set to continue this year starting this week with the unveiling of his latest work on Waiheke Island as part of the headland Sculpture on the Gulf festival.

The 2.4 metre work comprising two x-shaped structures that form a diamond cavity, fitted with his signature neon lighting, will soon be a highly visible presence on the island. It will also be easily seen by ferry passengers and from the Matiatia Harbour up to the headland. Located on an elevated site that allows the diamond void to frame an historic rua tāhuhu (subterranean kumara storage pit) with the sculpture’s internal lighting allowing people to see a repetition of the neon from front and back.

“The diamond [shape] of the sculpture frames the headland of the kumara pit so the sculpture becomes a symbol of mana whenua [territorial rights] of local iwi and a statement of the importance of protecting heritage and wahi tapu lands,” Professor Jahnke says.

It’s a theme evident in his work that stretches back to his time as a Māori academic and pioneer in contemporary Māori art acknowledged in the New Year’s Queen’s Honours when he was awarded an Officer of the New Zealand Order of Merit (ONZM).

“It was a pleasant surprise but it’s good to be recognised for both Māori art and education,” Professor Jahnke says.

A commissioned 6.4 metre pou unveiled at Auckland in September combines both disciplines.

Pouwhakamaharatanga mo Maui tikiti a Taranga references stories of the demigod Maui with the three crowning figures representing Maui slowing the sun, Maui fishing up the North Island and Maui securing fire from Mahuika, the goddess of fire.

The Pou, commissioned by the Waterfront Theatre Ltd, stands in the Logan Campbell Yard alongside the newly opened ASB Waterfront Theatre. It is built from corten steel and laminated totara and provides a focal point for powhiri and ceremonial occasions at the theatre.

Professor Jahnke says the pou marries contemporary techniques such as laser cutting alongside customary carving, and the rich patterns speak to aspects of Maui’s story.

Much of Professor Jahnke’s work possesses a creative vitality, often with a political edge all the while championing Māori art and using it to highlight important cultural issues.

Another case in point is the 6.4 metre Nga Huruhuru Rangatira “Feathers of the Chief” archway sculpture unveiled in November on one corner of the Square in Palmerston North.

The stylised giant huia feathers, commissioned by the Palmerston North Sculpture Trust, are crafted from 3000 kilograms of ground stainless steel, featuring three feathers on one side and two on the other, representing a union between Māori culture and western knowledge.

“The three feathers are an iteration of a tri-feather motif at the base of rafters in some tribal houses and acknowledge the mana whenua of Rangitane while the two feathers signify literacy and the signing of the Treaty of Waitangi and acknowledge Palmerston North as a city of learning with Massey, UCOL, and the Te Wānanaga o Aotearoa all there,” he says.

The reflective nature of the work continues a strand of thinking that was very much to the fore during his neon exhibition Ata at Pataka in Porirua last year. Aspects of it can currently be seen at Te Manawa art gallery in Palmerston North on the first stop of a North Island tour.

Meaning form and reflection, Ata explores connections between light and perception, form and retrospection as depicted in neon forms of diamonds, triangles, crosses and clubs that combined with mirror effects appear endless and multi-dimensional.

If that all sounds too arty, seeing it up front cannot stop the viewer from being first intrigued and soon enchanted by neon effects that embrace the inner child.