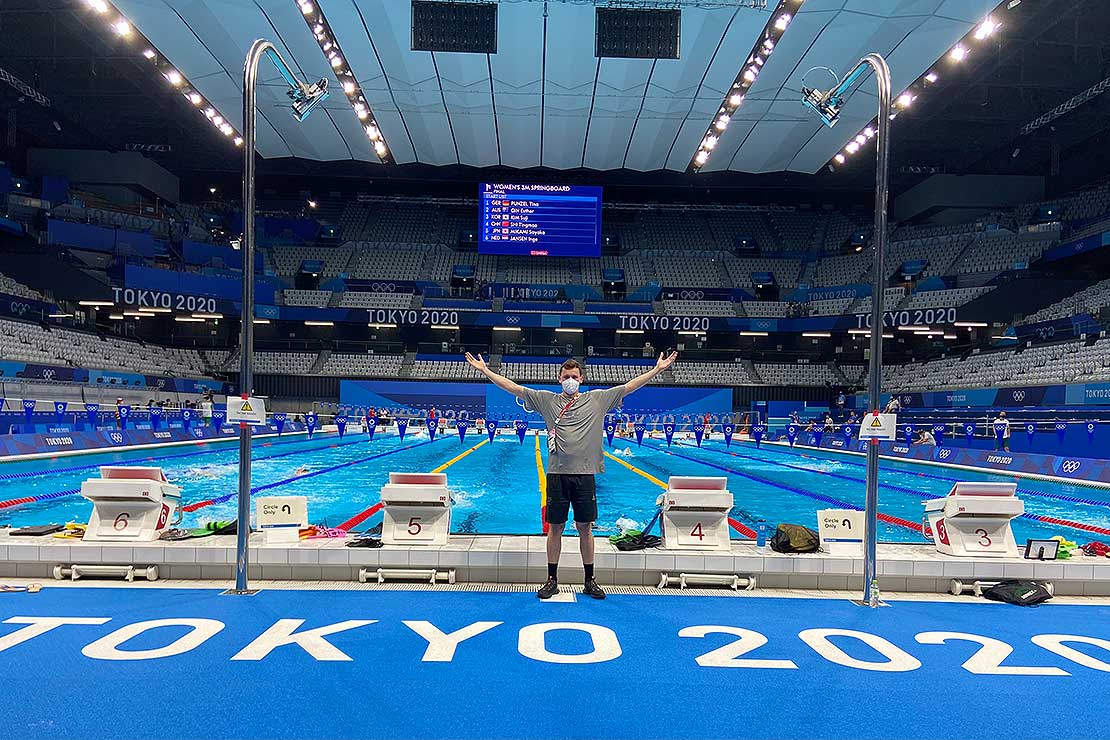 Despite the stands surrounding the pool being mostly empty as a result of a ban on spectators, Zac Reid says there was still a great atmosphere for competition. 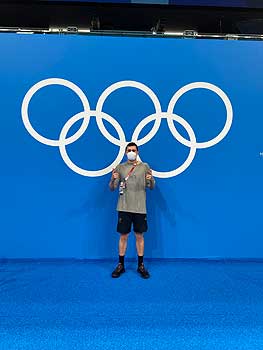 Returning home to a nation-wide lockdown less than 24 hours after leaving mandatory managed isolation, Olympic swimmer and Massey University student Zac Reid will have to wait a little longer to celebrate his Tokyo success.

After spending two weeks inside an MIQ facility, and now isolating at his home in New Plymouth, Zac has had plenty of time to reflect on the waves he’s recently made abroad.

At just 21, the Massey Academy of Sport athlete impressed at the Tokyo 2020 Olympic Games with a victory in his 800m freestyle heat, claiming a personal best time and breaking his own New Zealand record in the process.

Though his time was unable to claim him a place in the final, Zac was proud to wrap up his Olympic campaign with such a positive performance.

“The feeling I had after winning my heat and the sense of pride and achievement of doing a PB at the Olympics was amazing.

“I was super nervous going into the race but after diving in and being out front from the start, I felt so good,” he says.

Despite the stands surrounding the pool being mostly empty as a result of a ban on spectators,  Zac says there was still a great atmosphere for competition.

“A lot of the swimming team members were in the stands supporting, so there was this cool vibe in being able to hear your teammates cheer you on.”

It was these teammates, and the wider crew Zac was surrounded by, that he claims made his Tokyo experience so special.

“I met so many cool Kiwis who share the same passion and love for sport - the whole vibe of the NZ team was amazing to be a part of. Being able to represent your country together at the highest level is an awesome feeling,” he says.

That feeling is a far cry from Zac’s battle with motivation in early 2020 when the New Zealand Olympic trials were cancelled just a week out due to the global pandemic.

Going from almost racing what he considered to be the most important race of his life to eight weeks of lockdown, Zac says he really struggled, but was able to use the time to reset mentally.

“After not being able to do much, I was super motivated when we came out the other side. I knew I was capable of qualifying, so I knew I just had to do some hard yards in the pool.”

And those hard yards have paid dividends.

Now Zac stands as a member of New Zealand’s most successful Olympic team in history, well aware that the performances he posted in Tokyo have already played a role in inspiring the next generation of Kiwi swimmers.

“I was actually visited by a nine-year-old girl and her father in MIQ and spoke to them through the fences. It was so cool to see how much of an impact I have had on her life and her goals in her swimming.

“It’s cool to know there are young guns watching the games and being inspired by our success and wanting to get there themselves.”

A Bachelor of Science student, Zac is making the most of the current lockdown to catch up on his study as he patiently waits to get the chance to catch up properly with his friends and family.