Home > About Massey > News > Having a look inside an eruption

Having a peek inside an eruption 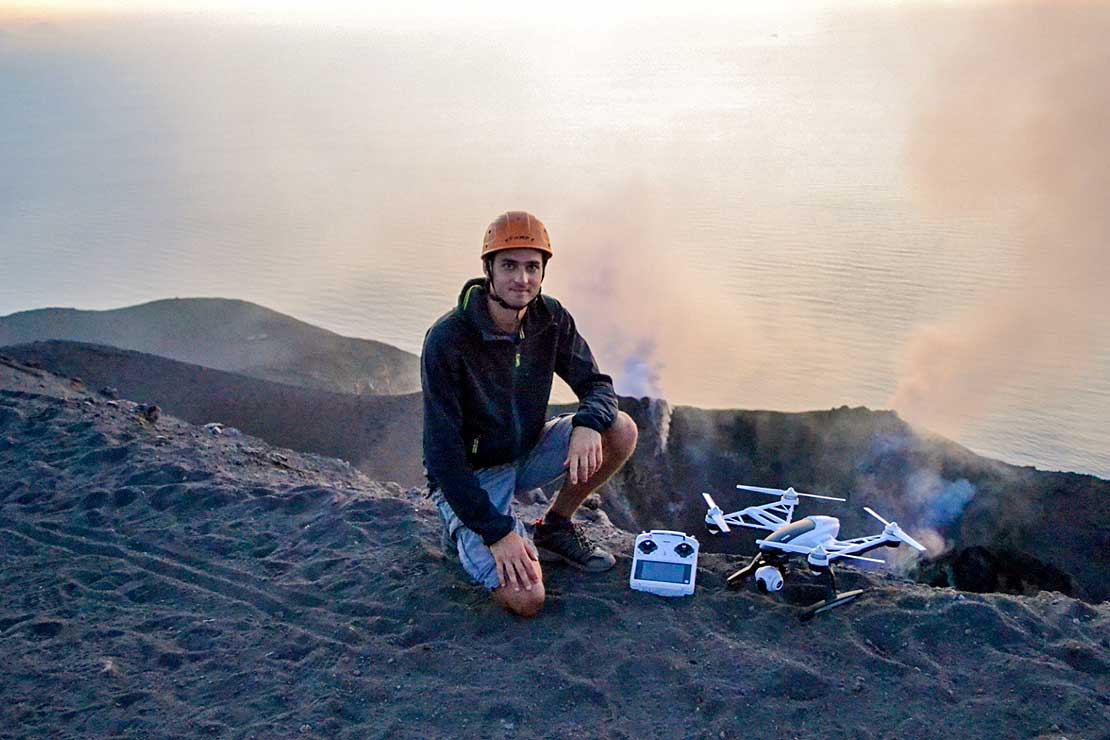 Ermanno Brosch on the summit of Stromboli volcano in Italy, where Mr Brosch was flying a drone, filming ongoing eruptions.

PhD student Ermanno Brosch has been all over the world pursuing his passion for volcanology, so when he got the chance to peer inside one of the deadliest results of an eruption, he took it.

After writing his master’s thesis on the largest active volcano in Europe, Mount Etna in Sicily, Italy, Mr Brosch came to New Zealand to do his PhD in earth science.

His research involves studying pyroclastic density currents, which are hot, fast-moving mixtures of particles and gas which form during volcanic eruptions and flow down the flanks of volcanoes.

Pyroclastic density currents have caused huge devastation over time, destroying infrastructure and resulting in loss of life. For example, significant flows occurred during the 1980 Mount St. Helens eruption in the United States and the 1991 eruption of Mount Unzen in Japan. A more recent occurrence was during the catastrophic eruption of Fuego Volcano in Guatemala this year, affecting more than 1.7 million people, and leaving hundreds dead or missing.

For his project, Mr Brosch focused on a dilute type of current called pyroclastic surges, which are less concentrated in particles and have a lower density compared to pyroclastic flows.

“These surges – as we call them in short - are very hot, very fast and very powerful and they can cause massive destruction during explosive volcanic eruptions. Also, being less concentrated than pyroclastic flows, they have an increased flow mobility which makes it harder to predict their flow path.

“Predicting how they will behave and propagate is vital in protecting future settlements and people from these flows, but the problem is that little is known about what occurs inside surges. No one had ‘a direct look inside’ these flows during eruptions in order to understand how they are made up internally. For obvious reasons - real world flows are too dangerous to investigate directly.”

The Pyroclastic flow Eruption Large-scale Experiment (PELE) at Massey has been helping scientists do just that. PELE is an experimental setup that is able to generate these flows as they occur in nature but in a small scale. This allows them to explore the internal mechanisms that drive the flows.

Mr Brosch conducted a number of large-scale experiments using PELE. As exciting as this sounds on the day, the experiments require months of preparation and involve a large number of sensors and cameras. This involved countless hours of work, as well as national and international collaborators on the project.

So far, identifying a number of mechanisms which generate destruction potential in pyroclastic surges was one of the many highlights for Mr Brosch. The next stage in this project will be to reproduce the experiments using complex numerical models.

“The results of my study will be useful to research as they will increase the knowledge we have about these flows. For instance, to understand how their destructive power is generated. With my research I hope that advanced models can be created for hazard assessment to predict the impact of pyroclastic surges and to identify high risk zones around volcanoes.”

“I have been enjoying my time as a student at Massey very much, especially the interaction with PhD students from all over the world. Also, what I really like about this campus is that it offers some nice spots for taking breaks from the daily PhD work.

“I could not have imagined I would meet so many people from so many countries when I arrived in New Zealand. The large community of international students here is a great place to be involved in lots of extracurricular activities and I am happy to have made friends from all over the world.”