Home > About Massey > News > Life after league: a health perspective

Life after league: a health perspective 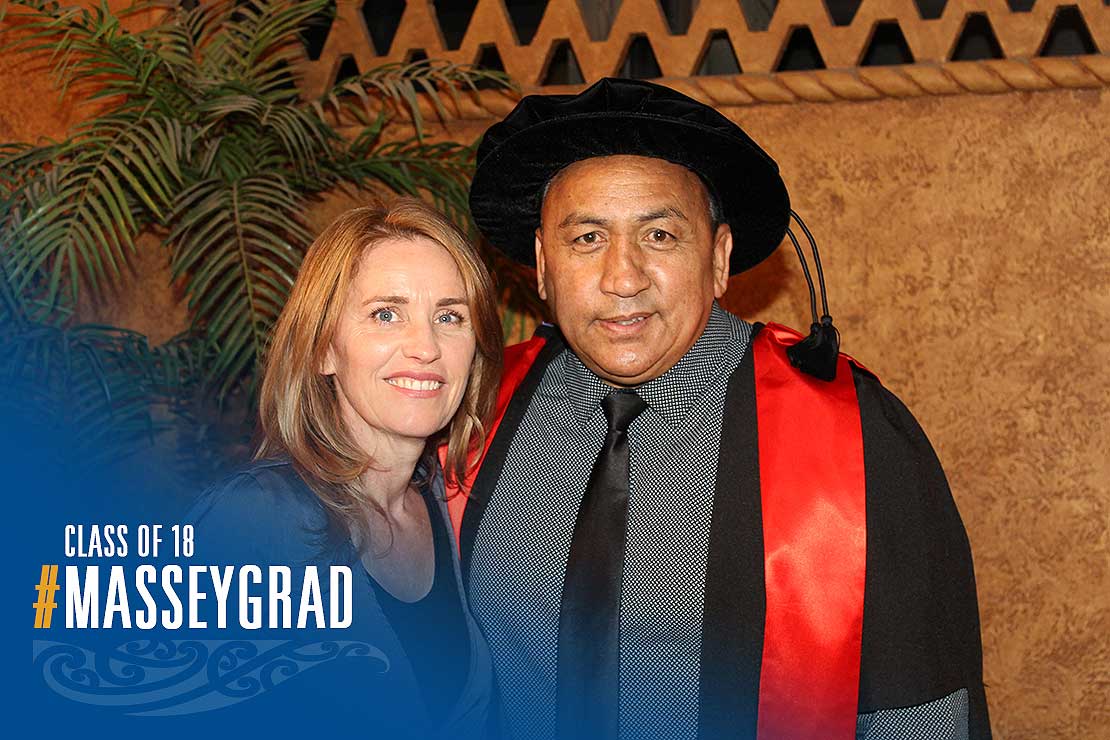 Dr Clark playing rugby league for Bradford against Sheffield
in 1993. 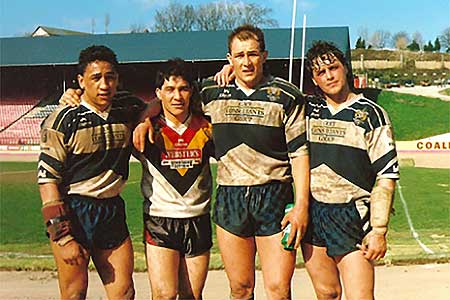 Dr Clark, Brett Iti, Clarry Iti and Brendan Tuuta after a match
between the Featherstone Rovers and Bradford Northern in 1990. 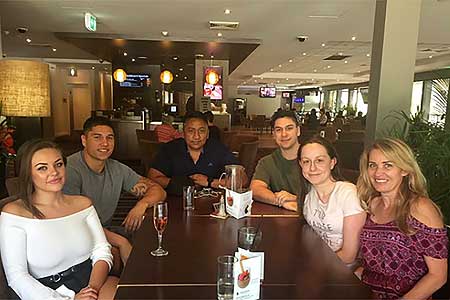 Rugby league players must be fit, strong and healthy in order to bounce back from injury and be ready to tackle the next game head on. Now, new research has explored the health of retired Māori rugby league players to see if any health advantages remain long after the final whistle has blown.

Dr Trevor Clark, Waikato-Tainui, graduated with his Doctorate of Philosophy in Palmerston North on Friday. For his thesis, he carried out the first exploratory health study of Māori men retired from rugby league in New Zealand, using mixed methods within a Māori-centred approach.

During his 12 years playing rugby league professionally, between 1983 and 1995 in England, Dr Clark completed Bachelor of Arts (Hons) and Master of Sport and Exercise Science degrees at Leeds Becketts University, majoring in exercise physiology and sport psychology. It was his interest and passion for sport and health that led to the development of this study.

“I had suffered a number of injuries and my body was a lot worse for wear. I wondered if other retired Māori players were in a similar state?”

The group of Māori former rugby league players in this research experienced high levels of injury and disability contributing to on-going morbidity or disease, Dr Clark says. “Concussion and head injuries are a major concern to participants, and potentially a major cause of morbidity. There was evidence of declining health status and many of the players had gained weight since retirement. In fact, this was the most acknowledged component by all players that took part in the study.”

There is also potential for similar studies on other indigenous populations around the globe to support healthy ageing once participants had retired from competitive sport, he adds.

Dr Clark has two sons - both were born in Pontefract, West Yorkshire, England. “My eldest son Regan, 27, retired from playing competitive rugby league at the age of 18 after suffering numerous injuries whilst playing. He was a standout player during his junior years in both rugby league and athletics.

“My youngest son Mitch, 25, is literally following in my footsteps, having played for two of my old English clubs, Bradford and Featherstone, and he now plays with the Castleford Tigers in Super League.”

Mitch has also suffered numerous injuries including a broken arm/wrist and dislocated ankle, both requiring surgery, Dr Clark says. “These injuries resulted in many missed days of both training and playing. He plays as a prop forward, probably the toughest position to play in the team and relishes the collision and challenge of every game.”

Dr Clark, who grew up in Hamilton, is now based in Sydney Olympic Park at the Australian College of Physical Education where he is Head of Department, Sport Performance and Sport Business. He oversees bachelor degree programmes in coaching (in strength and conditioning, and management), and one each in applied fitness and business leadership. He also manages a postgraduate diploma in sports administration.

Dr Clark maintains strong affiliations with industry and holds elite level accreditations with the Australian Strength and Conditioning Association and Exercise and Sport Science Australia. His passion still revolves around rugby league which has a very strong presence in Australia.

“I would like to thank all my friends and whānau who contributed to this study – especially the retired players involved in my research, my mum Rita, my brothers and sisters, my wife Christine, my sons and my two step-daughters. I’d also like to acknowledge the Tainui Māori Trust Board and the Health Research Council of New Zealand for their unwavering support. Special thanks go out to my supervisory team leader Professor Chris Cunningham, my very close friend Dr Doug King, Dr Marg Wilkie and all the team at the Research Centre for Māori Health and Development.”