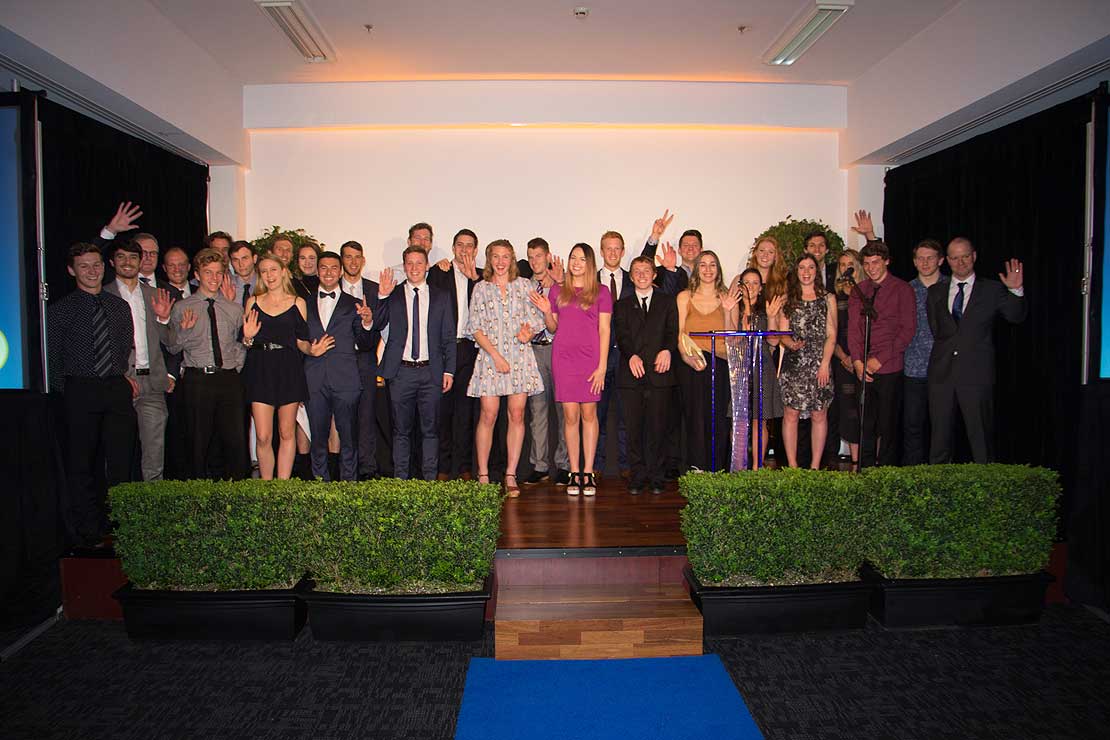 Some of the 2016 Blues Awards recipients at last year’s awards in Auckland.

Finalists for the Massey University Blues Sports Awards have been announced – the highest sporting accolade given in the New Zealand tertiary system.

This year Massey is awarding 138 Blues Awards to 131 student-athletes. Seven athletes will be receiving an award in two sports.

Olympic, Commonwealth Games and World Championship Track Cycling medallist Simon van Velthooven, who is also a current Massey student, is the guest speaker at the awards, which are being held on the Auckland campus on October 19.

Known for his explosive speed and long sprint, the 28-year-old from Manawatū was recruited by Emirates Team New Zealand to provide the power that allowed the catamaran to be so competitive in Bermuda and ultimately bring the America’s Cup home to Auckland. Mr van Velthooven is currently completing his Bachelor of Applied Science, majoring in Rural Valuation and Management, via distance.

The Manawatū campus is hosting the Blues Awards for both the Manawatū and Wellington campuses on October 17, with guest speaker and previous Massey Blues winner Mary Fisher, who won gold in para-swimming at the Rio Paralympic Games last year. Sportsman and Sportswoman of the Year nominees

These awards are for students studying via distance learning, and highlight Massey University’s longstanding reputation for providing the highest level of flexibility, tailored to the life of the high-performing athlete. As a result of this dedication, Massey was the first in New Zealand to be named an athlete-friendly university by High Performance Sport New Zealand.

Some of the Blues Award winners at the 2016 Manawatū awards ceremony.

The Massey University Sportsman and Sportswoman of the Year awards is for trophies given to athletes from each of Massey’s three campuses in Auckland, Manawatū and Wellington.

The story of the Blues sports awards originated in England in the mid-1890s. Fierce rivalry between Oxford and Cambridge Universities, competing in very different shades of blue, heralded the beginning of the sporting award now known as the “Blue”. It wasn’t until 1912 that the University of Cambridge formed a committee to oversee the task of awarding “Blues to those students who had excelled both on and off the field of play”.

This year is the 30th anniversary of the inaugural presentation of the Massey University Sportsperson of the Year Award. Sport at Massey has come a long way since 1987 with the Academy of Sport opening in 2006, enabling our athletes to work with High Performance Coordinators, who provide individually-tailored support to assist with academic planning alongside sport commitments.

With a combination of on-campus, distance or mix-mode study options, and the choice of either full-time or part-time study, athletes can fit their study around their sporting commitments so they are able to participate on the international sporting stage.