It was built to house international students studying under the Colombo Plan and opened in 1964.

New Zealand was a signatory to the Colombo Plan, created after World War II in an effort to thwart the spread of communisim in Asia and raise living standards. Along with offering direct aid, New Zealand also provided expertise and training opportunities to students from India, Pakistan and Sri Lanka initally, and later, Cambodia, Indonesia, Laos, Malaya, Myanma, Nepal, the Phillipines, Thailand, Vietnam and Singapore. By 1961, nearly 900 students had travelled to New Zealand during the past decade under the plan.

In an effort to strengthen the proposal, Heritage New Zealand is seeking to hear from those who formerly lived in or have a strong connection with the hall. Colombo Hall in the midst of construction in 1963

Plans for the three-storey building, which is an example of late New Zealand international modernism architecture, were first announced in 1960 by the Government of the time in an effort to meet the growing accommodation needs of international students studying at Massey as part of the Colombo Plan.

It was constructed by the Ministry of Works between 1962 and 1964 and officially opened on March 4, 1964 by then Prime Minister Keith Holyoake, with the High Commissioner for India, VK Ahuja, Palmerston North MP William Henry Brown and government architect and designer Fergus George Frederick Sheppard, in attendance.

“In its early years, Colombo Hall played an important role in housing international students,” Professor Thomas says. “These students added a great deal of diversity to campus and Palmerston North at a time when New Zealand wasn’t nearly as multi-cultural as it is today. Colombo Hall in 1963, the year it opened

At the time of the hall’s construction, more than half of Massey students resided in private, off-campus accommodation, with a shortage of suitable accommodation for both New Zealand and international students available in Palmerston North.

The only significant modification to the hall’s structure was made around 1984. In an effort to meet the increasing demand for accommodation from first-year students it was decided to extend the hall, rather than construct a new hall of residence.

Today, the hall is open to New Zealand and international students, accommodating up to 70 each year in single-occupancy rooms. 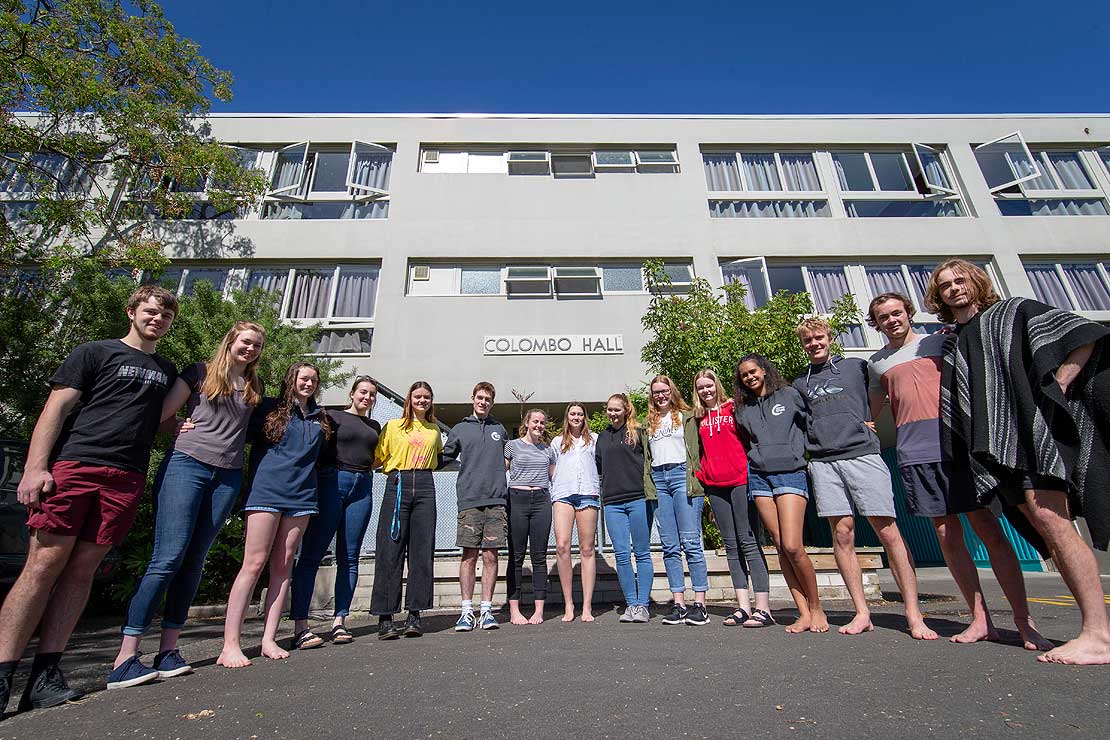 Massey Alumni Relations manager Cassie Rowe is hopeful that former residents will share their memories. “Since it’s construction, we estimate that more than 3000 students have resided in Colombo Hall, many of whom were international students. That’s a huge number of personal stories, experiences, photos and memories and we’re hoping our alumni will be kind enough to share them in order to provide a ‘human touch’ to the proposal,” she says.

The construction of the hall was part of a phase of major development at the campus – and significant growth in the University – between 1963 and 1971, with the Riddet Building opening in 1966 and the Student Centre in 1968.