FIFA referee getting used to the heat 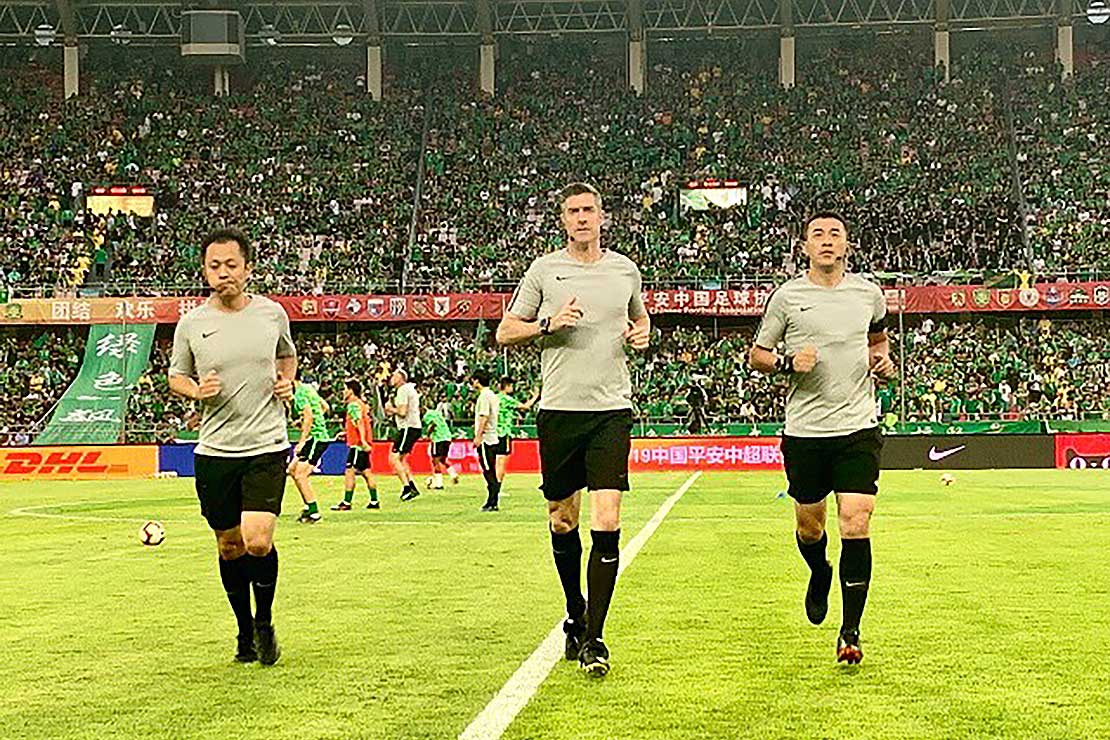 Just over a year ago Matthew Conger was in Russia refereeing at the 2018 FIFA World Cup finals. Now, with the support of Massey University, he is preparing for his next challenge – refereeing in professional leagues in Saudi Arabia and China and the associated environmental challenges.

As a result of his strong performance in Russia, he has had increasing opportunity to referee internationally, specifically the Saudi Professional League and Chinese Super League. Mr Conger juggles all of this, while studying towards a Master of Sport Management via distance, following the award of a Prime Minister’s Athlete Scholarship.

“Ultimately, I would really like to be selected to referee at next year’s Tokyo Olympics and then again at the 2022 FIFA World Cup in Qatar,” Mr Conger says.

In recent weeks, he has been running on a treadmill in the heat chamber at Massey University’s Human Performance Laboratory, preparing for a series of games he will be refereeing in the heat and humidity of Asia over the next month.

Laboratory manager Adam Miller says it is important work to prepare for high-temperature, high-humidity environments. “We have developed an individualised acclimation plan for Matthew, incorporating strategic daily heat exposure through alternating exercise in the chamber with sessions sitting in a sauna. Recently, Matthew was exposed to an hour in the sauna before refereeing a Central League fixture to replicate the challenging environments he will face in Asia.”

While many top FIFA referees are based in Europe, Mr Conger has to travel internationally to referee top games and gain valuable experience. For the past six months, he has been commuting regularly to the Middle East to referee. This month these flights will also include a trip to Beijing to referee Chinese Super League and Chinese FA Cup semi-final matches, ahead of the opening round of matches in Saudi Arabia.

Mr Conger says the flexibility of Massey and the support of staff have helped him achieve his career goals both short and long term. “Being able to come into the lab during the day to train, and the expertise of the high performance staff has certainly helped me prepare both physically and mentally for the challenges of the extensive travelling and the high temperatures that I will experience in China and Saudi Arabia.”

Following the 2016 Rio Olympics, he recognised he needed more experience refereeing at higher levels. Professor Andy Martin, says they reviewed a number of top international games to identify patterns of play that would help him react quicker when refereeing.

“This experience gradually increased his self-belief that a referee from Oceania could compete on the world stage. He also spent time in the Massey labs prior to his selection for the 2018 FIFA World Cup, working with staff from the School of Sport, Exercise and Nutrition on his physical conditioning to ensure he was able to cope with the high-intensity demands of top international football matches,” Professor Martin says.