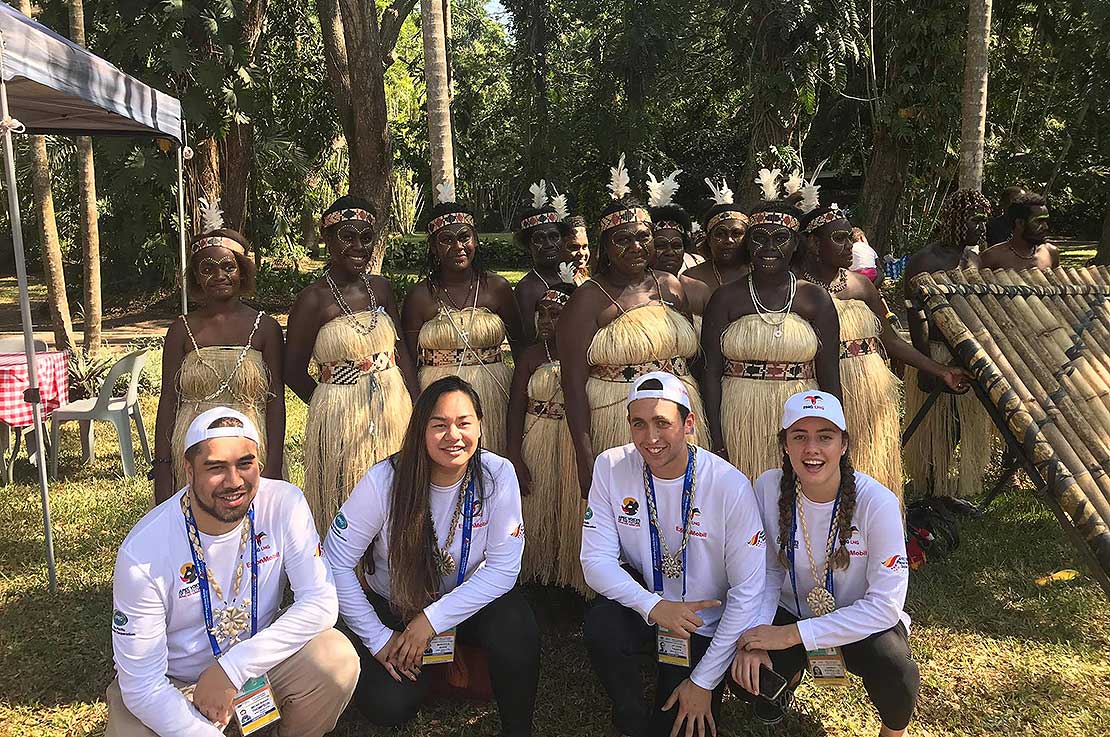 Massey master’s student Api Taiapa, Ngāti Porou, had the opportunity to see the cut and thrust of international politics up close and personal as a youth delegate at the recent APEC (Asia-Pacific Economic Cooperation) summit in Papua New Guinea.

Mr Taiapa, who is completing a Masters in Industrial Organisational Psychology with the School of Psychology, was part of a New Zealand youth delegation to APEC funded by the Ministry of Foreign Affairs and Trade, APEC and supported by Massey’s Office of International Relations.

Delegates got to stay on a cruise ship in Port Moresby while attending the APEC Voices of the Future summit which focused on the theme “Harnessing inclusive opportunities, embracing the digital future”.

Mr Taiapa says along with experiencing the incredible diversity of Papua New Guinea culture and meeting CEO’s and business leaders, he got to see the President of China Xi Jinping and the Vice President of the United States Mike Pence speak, and witness the tense diplomacy around the superpowers.

“There were quite a few times where I had to take a moment. It was unreal when you’re living this crazy amazing time – you had to take a breath and take it all in.”

Mr Taiapa says it truly was a life changing experience. “It made me realise how big the world is and the part that New Zealand and Māori can play on the world stage. People look to us as leaders in indigenous rights and we really need to live up to this reputation that we have.”

He says while New Zealand still has a long way to go in terms of fully addressing inequities, he believes Māori have amazing things going on.  “The New Zealand economy is $300 billion and the Māori economy is $40 billion and growing, and things like that really inspire indigenous peoples of the world.”

Mr Taiapa says the New Zealand youth delegation’s presentation was highly received because of its cultural inclusiveness. While New Zealand may not be a superpower, Mr Taiapa says people he spoke to at APEC saw us an important ‘softpower’ with a reputation as peacekeepers and an ability to work quietly behind the scenes.

Inspired by the experience Mr Taiapa will continue to focus on his research into how tikanga Māori can be used to improve business practises around New Zealand, with a thesis exploring the relationship between mana and leadership and the implications of that on organisations.