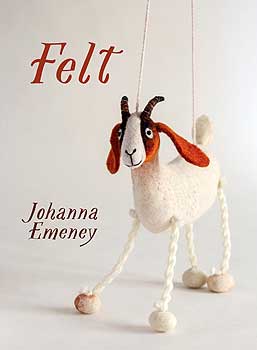 A goat made of felt features on the cover

Saving a gasping eel from a drought-ridden pond, shock at racist trolling, and a poignant encounter with a stranger in a swimming pool are among the eclectic experiences, observations and moments elucidated in Dr Johanna Emeney’s latest poetry collection, Felt (Massey University Press).

“This is my third collection, and its themes are the things I feel most strongly about in life, really: teaching (the teacher-student relationship); animals, nature, love and friendship,” says Dr Emeney, an award-winning poet and senior lecturer in creative writing at Massey’s Auckland campus.

Her last collection [Family History] was predominantly about loss, so she has left that theme alone in this one.

"This new book contains poems in storied sections about things that have affected me in the past five years," she says. "A past student in trouble. The loss of an important friendship. The effects of climate change, easy to witness in my own backyard. And there are joys – our animals, the amazing things of nature.”

As the title implies, the poems are about things deeply and indelibly felt – from personal connections to people and nature, as well as rage against the injustice and ugliness of racism, as in the poem Comments Section (read below), about a Muslim student’s exposure to internet trolls.

When that student wrote a short comment in support of protestors at the disputed Ihumātao site, Dr Emeney was shocked by one particular response – from a cat-loving, Bible-reading elderly woman. She says she gets that there is “a culture of anonymous idiots who pile on the racist comments, but Rose? The elderly, cat-saving Christian?”

Poems are a way of capturing precious fleeting moments that can otherwise be easily forgotten. And writing poetry is, she upholds, “a way to approach things that can be difficult to understand. It’s not that writing poetry about them yields the answers; it just somehow makes them more bearable.”

But poems about the student-teacher dynamic are hard to come by. For Dr Emeney, her observations reflect the value she places on the friendships and relationships she’s forged with some of her students over the 23 years she’s been teaching. She follows their subsequent lives and careers – some of them in writing and teaching – with great interest, and feels heartfelt concern for those facing more difficult fates, as in the poem Favoured Exception.

Those who know her will not be surprised by the cover image! Dr Emeney is an avid goat-keeper who dotes on four goats on her rural property north of Auckland. The front cover image, she says, features Grethe, who was “fashioned by a fabulous felt artist in the Republic of Georgia, Olga Kupunia. Grethe has a quizzical attitude and a beautiful softness to her which I fell in love with. The fact that she is suspended by strings, at the whim of human intention, sold me on the idea of her for the cover. Her four felty feet grace the back cover.”

Two of the poems are about goats; “Shelter from the Storm” and “Bad Jokes / About Goats”. Another backyard creature that appears in her book is a large eel she courageously plucked from a shallow pond, as it gasped for life during a drought. The anecdote – including how she was told off by a vet who said she could have sustained a nasty bite as she carried it to deeper waters – turned into a poem about charity, and how it is easier to rescue “pretty things.”

Aside from writing poetry and teaching, she is working on an illustrated book with Sarah Laing about the life of renowned Auckland Bird Lady, Sylvia Durrant, aged 88. She retired in 2018 having rescued some 4000 birds a year (an estimated 150,000 in her time as a drop-off place for injured birds). The book is due out in 2023.

Ten years ago Dr Emeney came third in the prestigious British Hippocrates Prize for Poetry and Medicine. Her shortlisted poem Radiologist’s Report is based on a report her mother received informing her of secondary breast cancer. She published her first collection of poems, Apple & Tree (Cape Catley) in the same year.

In her PhD at Massey, supervised by Professor Bryan Walpert and Dr Jack Ross, she explored the emerging field of medical humanities by investigating the work of several New Zealand poets writing on medical themes. In her second collection, Family History (2017), published by Wellington’s Mākaro Press, she brings her family history to the page – in all its uniqueness and ordinariness – and challenges the medical approach that can forget the person inside the patient. She was also guest editor of the 2020 Poetry New Zealand Yearbook (Massey University Press).

Felt will be launched on Tuesday, 13 April, 6pm, at Takapuna Library.

Listen here to a reading from Felt, of Favoured Exception: Youtube https://youtu.be/1ufAJAED9lo

Ali writes that the land never should have gone to developers.

Our first Māori burial site was not a place to be sold.

Ali Hussain, your not even a kiwi. Ali bla-bla go back to Bagdad!

‘Stephen King’ is a cartoon eye. Others have a planet (fiery

Jupiter for Kevin) or variations on the anonymity of a circle.

This is how we expect our trolls. The crosshairs. The MAGA cap.

Rose, though. She holds a big grey cat. Behind her profile,

is the presence of Christ in the midst of distress—

and so many donations, adoptions, foundations.

Rose even posts her landline once: at her house

she has a stray in poor condition. He will stay

until claimed. She will treat his weeping eye with tea.

How to reconcile this Rose with It is predicted your kind

will be our biggest problem. Rose, who does not know

compassion beyond the blood of Christ and cats—

Rose, who will not allow a man to say, in this, his home,

that it is a mistake to displace the living and the dead,

to tell people they do not belong where they belong.