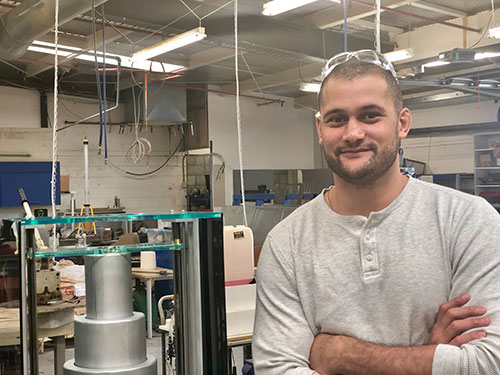 Massey University engineering student Rangi Otene will be completing his Bachelor of Engineering (Hons), majoring in mechatronics at the end of 2019.

“Growing up, I didn’t feel like I would end up being a university student. Teachers, and even friends, would put me down by making comments like ‘you’re not smart enough for that’ and ‘you’re just a dumb Māori/Islander’. Hearing these, I developed low expectations for myself and felt depressed about my ethnicity and not being smart enough to go to university”. Rangi says these comments can have disheartening effects on Māori and Pacific students growing up as it can stunt their futures and discourage them from realising their dreams and aspirations.

After completing NCEA level 3 in high school on the North Shore of Auckland, Rangi took up two trades becoming an electrician and a high voltage switch fitter. Fully qualified at the age of 21 he headed overseas to work in the mining sectors in Australia, but after a few years he felt like he wasn’t living up to all he could achieve. “My head was saying: use what God has given you, while you still have a chance.” After researching several universities within New Zealand, he chose to enrol at Massey University’s School of Engineering and Advanced Technology (now known as the School of Food and Advanced Technology) in Albany, whose engineering qualification matched his practical nature.

“Going back to study, after a number of years being in the workforce, wasn’t easy. I had to start from square one again; re-learning the fundamentals. Because of my age I felt I didn’t have time to waste; I thought to myself ‘forget the pride and stop trying to look good in front of people, if you don’t know what you’re doing, ask for help’. That attitude started right from the beginning of my studies and has continued to this day. Lectures, such as Dr Sam Tuttle, Dr Frazer Noble and Dr Khalid Arif, are great lecturers, they break down their lessons into small ‘bites’ that I understood, and spent time helping me when I needed it. I’ve had to teach myself a sense of humility, to ask questions, which may seem easy to other people, but to me it was hard.” Rangi admits that feeling whakamā or embarrassed is a big issue for Māori and Pacific students, but he says he has learned to ask for help from other students and credits his grades to his class mates, Jay Odendaal, Shreyas Borgaonkar and Zhan Widdison, who have pushed him to excel.

Rangi says the Engineering on the Albany campus offers a real whānau atmosphere. “Sometimes I stay here till one or two in the morning because I don’t want to leave. I’m always wanting to learn something new and this place just feels like another home”.

He says it was the Massey staff who helped him continue his studies when his whānau went through dark times. “It became a real fight to carry on and staff members, such as Sean Rasmussen and Blair Dixon, listened to my needs and offered quiet places to study when times were hard. For me that came across as a manakitanga (kindness), which they share with the students here”.

Rangi is passionate about his mechatronics major, the combination of mechanical engineering, computing engineering and electronics/electrical engineering, and feels he has grown with every semester. “I love every aspect of engineering - it fascinates me, and I can see how it can be used to help communities.” Now with the end of his honour’s year in sight, Rangi already has a job lined up. He also has dreams of getting into renewable energy in the future. “Growing up I always remember hearing about people struggling to pay for water and power. Now I’m thinking, what if we could give low income families the power to control these two resources themselves? We have the technology now to make our homes self-sufficient and that’s a career path I’d like to pursue.”

His individual project is about manipulating high electric fields for electro-spinning purposes, which he hopes will feed into the development of renewable energy technology.

In the meantime, Rangi is concentrating on graduating and is keen to encourage those feeling discouraged about studying at university to believe in themselves and go for it.