New research sheds light on how climate change will impact the distribution of great whales in New Zealand waters.

Results show that these species will shift to lower latitudes as the oceans become warmer, exposing sites of high conservation priority.

The study, published this week in the international journal Ecological Indicators, shows a southerly shift of suitable habitat for both species, which increases in magnitude as the ocean warms. The most severe climate change scenario that was tested generated a 61 per cent loss and 42 per cent decrease of currently suitable habitat for sperm and blue whales, mostly in New Zealand’s northern waters.

Research lead Dr Katharina Peters of the University of Canterbury says, "Regardless of which of the climate change scenarios will be the reality, even the best-case scenario indicates notable changes in the distribution of suitable habitat for sperm and blue whales in New Zealand."

Island nations such as New Zealand are extremely vulnerable to climate change impact on marine ecosystems because of their strong connection to the ocean. For example, sperm whales in New Zealand are critical for the tourism industry and local economy. Study co-author Professor Karen Stockin, who leads the Cetacean Ecology Research Group at Massey University, says, “The whale watch industry off Kaikoura may be at potential risk due to fewer and less reliable sightings of sperm whales off that coastline in the future. Such changes in sperm whale distribution would have socioeconomic impacts due to the direct and indirect reliance on the whale watching activities by the local economy.”

Great whales, such as sperm and blue whales, are important ecosystem engineers. This means that they fulfill a multitude of tasks such as facilitating the transfer of nutrients from deep waters to the surface, and across latitudes via migration from feeding to calving areas. Their predicted future southward shift, driven by climate change, will impact ecosystem functioning and potentially destabilise ecological processes in the northern part of New Zealand.

While this research emphasises the negative impacts of climate changes on blue and sperm whales, it also highlights habitats that may be suitable in the future for both species in the South Island and offshore islands. Senior author Dr Frédérik Saltré, co-leader of the Global Ecology Lab at Flinders University says, “Such areas have the potential to serve as climate refugia for both species. Knowing about these areas early on provides an opportunity for their increased protection in the future, particularly when considering the placement of marine protected areas and the legislation of oil and gas exploration.”

New biological insights into mass strandings of long-finned pilot whales has just been published in the Journal of Mammalogy. 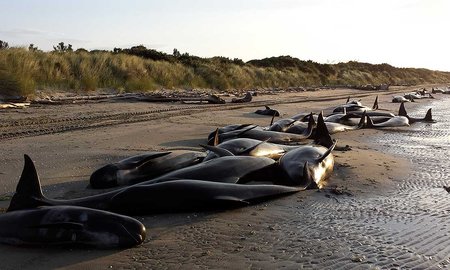 Scientists have found microplastics in all New Zealand dolphins they examined, a new study has revealed. 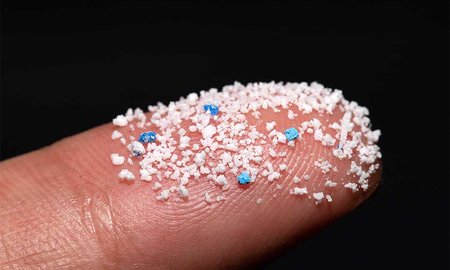 Massey University marine mammal expert Professor Karen Stockin is one of a team of international scientists from 30 institutes and 13 countries challenging current understanding and conservation efforts for marine mammals globally. 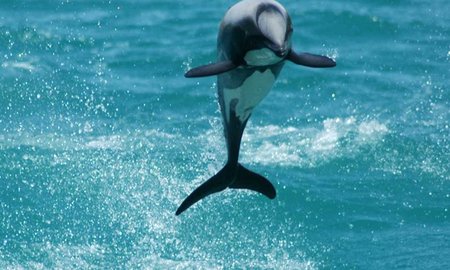