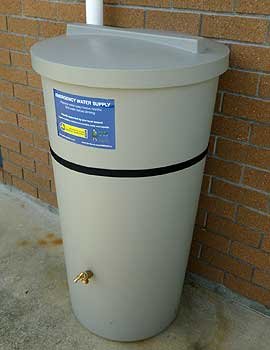 The recently published study by Massey University’s Joint Centre for Disaster Research set out to see whether collecting rainwater in an urban environment would lead to the tank water being chemically polluted.

Lead author Dr Carol Stewart, a senior research officer at the centre, says a key finding from the study is that the levels of E.coli indicator bacteria taken from the samples are surprisingly lower than expected, particularly from systems attached to unpainted, galvanised steel roofs.

“There turned out to be no problems with urban air pollutants such as vehicle emissions or plasticisers, but what we did find was high levels of metals from the roof materials (zinc coatings, lead nails and flashing) turning up in the tanks, and – unexpectedly – zinc appearing to kill the microbes which are normally present in roof tank water.

“We think this is because the zinc present in the runoff from this type of roof kills the microbes - this is consistent with what is known about the toxicity of zinc,” visiting research fellow Dr Stewart says.

“These high levels of zinc will be toxic to E.coli and may give the water a metallic taste, but are well below levels that are toxic to people and pose no direct health risk.”

But a potential health hazard highlighted by another key finding in the study is that older roofs with lead head nails and lead flashings cause high levels of lead in the rainwater tanks, and frequently exceed New Zealand’s drinking water long-term maximum allowable level of 10 micrograms per litre.

“Drinking this water long-term would carry increased health risks, but drinking it in the short term may not,” Dr Stewart says.  “However, we don’t know this for sure, because currently there aren’t any drinking water standards for short term consumption,” she says.

The Ministry of Health is currently developing short-term guidelines for chemical contaminants although they are not available yet.

To minimise health risks of drinking water from emergency rainwater tanks, the study advises people to fill the tanks with tap water first, rather than relying on roof run-off, and to clean and refresh the contents every 12 months.

Other tips to minimise health risks include boiling or chemically disinfecting the water before use, cleaning out the tanks once a year, keeping gutters clear, and taking care to keep overhanging branches away roof areas.

Tanks for the rain

Six 200 litre tanks – designed by the Wellington Regional Emergency Management Office (WREMO) in partnership with The Tank Guy – were set up at properties within these regions for a year, with samples collected every fortnight to analyse for chemical and microbiological water quality variables.

The tanks have been recommended to the public by WREMO as affordable, practical options for households to increase their emergency water storage. They are more basic in design than systems providing rainwater for all household uses that typically include protective features such as leaf guards and first-flush diverters.

A spokesperson for Wellington Water says the study’s findings are useful in the event of an emergency when people will need to gather from alternative sources, and ahead of time they recommend storing treated water.

Wellington households need to have their own water supplies in the event of a major earthquake as the region may be without water for months, says Dr Stewart.

Massey researchers from the Joint Disaster Research Centre and the School of Public Health wrote the study, with funding from GNS Science.  It has been published in the International Journal of Environmental Research and Public Health and is accessible to the public.