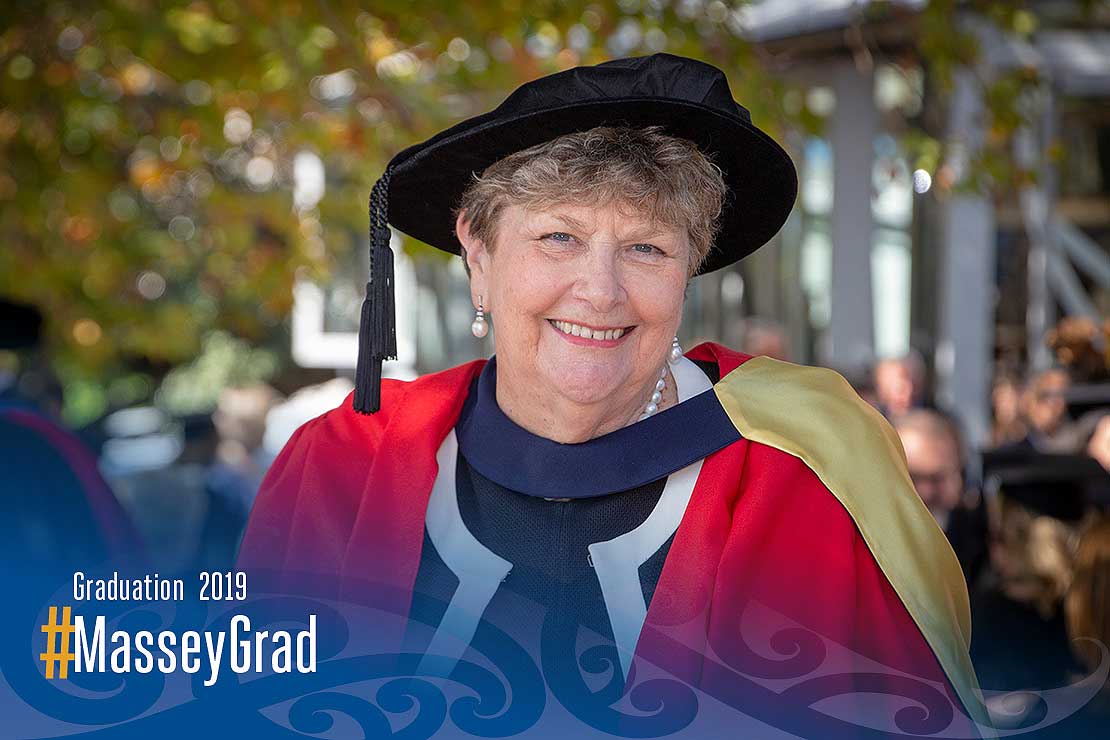 ‘Teaching the world to read’ has been educational publishing phenomenon Dame Wendy Pye’s mission and mantra for 35 years. Now, Massey University is celebrating the life-changing impact of her early literacy resources to children all over the planet, from Aotearoa to Cambodia, China, India and Egypt.

Receiving Massey’s first Doctor of Education (honoris causa) Honorary Doctorate at the Auckland graduation ceremony for the College of Humanities and Social Sciences is just one of her many accolades. It is especially meaningful coming from academia, she says. The doctorate was awarded in recognition of her outstanding contribution to the development of quality educational resources.

Australian-born Dame Wendy (MBE, DNZM), founder and managing director of Sunshine Books and the first woman to be inducted into the New Zealand Business Hall of Fame, believes it is also the first time a New Zealand university has awarded an honorary doctorate to an educational publisher – one whose talents have previously been lauded by the business sector. She appreciates the recognition and kudos the degree brings, with its emphasis on her achievements in raising literacy by making affordable books and digital reading and learning materials accessible to millions worldwide, many who may not otherwise have been empowered by reading.

It all began in 1985, in her Otahuhu home in Auckland, where she brought together a small team of writers, illustrators and educators to create a range of reading materials to appeal to young readers. The catalyst for her homegrown enterprise was meeting adolescents who couldn’t read, while she was doing research for a media story. She was shocked, concerned about what a lack of reading ability would mean for their futures, and decided to do something about it.

Having been raised on a farm by a book-loving mother in the rural Western Australian town of Cookernup, south of Perth, with three older sisters, she has long harboured a deep love of literature. Her exposure to the incongruity of imported British children’s stories – which featured snow in November, while she was melting in the 45 degree Celsius heat – shaped her sensibility about the need for stories that resonate culturally.

Today, her company is one of the most successful educational export companies, having published over 2,000 fiction and non-fiction titles and sold more than 300 million copies globally. Sunshine Books are widely used in New Zealand schools too, and have been translated into 15 languages and exported to 10 countries. Some of New Zealand’s top children’s authors, including Joy Cowley and Margaret Mahy, have written Sunshine books.

Dame Wendy says she has worked extremely hard, pouring all her time, energy, passion and resources into research and networking as she built her business. She’s even had times when she lived on tinned spaghetti so she could make the next step in business.

As she told Idealog magazine, “here in New Zealand we are a great nation of talkers, but you've got to actually get out there and do it. You need to get on that plane. Go to trade shows, walk around the floor, stay in the cheapest hotels and book the cheapest airfare, and then go and learn the market. Always talk to people and listen to what they have to say. And make hundreds of mistakes.”

Sunshine Books in China and India

A week before her graduation, an exuberant Dame Wendy celebrated breaking news of her latest success – a second major contract for 120 titles with The Foreign Language Teaching and Research Press, one of the largest foreign language publishers in China – to further support her programme in English to potentially millions of Chinese children. She has been collaborating with Professor Qiang Wang at Beijing Normal University to develop a new English Language Learning Project. The training includes up to 3000 teachers at a time in a pilot programme that challenges perceptions of Chinese education because it introduces the concept of critical thinking. This development reflects a growing realisation that China needs to innovate, not just copy, in the next phase of its development, she says.

Another deal has just been confirmed, this one in India where educators are rolling out her company’s digital tablets. Preloaded with books, learning activities and games, they are reaching children in villages where poverty is entrenched and school attendance – particularly for girls – is patchy at best and the internet is not accessible.

For this extraordinary business woman/philanthropist, known for her love of race horses, pearls, emeralds and champagne, literacy is the vital key to overcoming poverty, unemployment and a lack of skills, and in building self-esteem. She realised 15 years ago that digital technology could be embraced as a positive tool for literacy. “When I saw how kids were engaged in Playstation I saw the future – but using digital technology for meaningful learning experiences as well,” she says. “My vision was to get kids all over the planet reading – for $50 a head. Most people said I was mad!”

The key was to create a digital platform that doesn’t rely on internet infrastructure because half the world’s population doesn’t have internet access. The solution, her preloaded tablets with 300 books, games and activities, are marketed for children in Egypt, as well as in Denmark. Selected titles are also in Germany (in the German language), where she observed that schools receiving large numbers of refugee children fleeing war and famine in the Middle East and Africa needed help. Resources targeting this group were created, with recognition that many had not been able to attend school for years while they were in refugee camps.

Head of Massey’s Institute of Education Professor John O’Neill says in his nomination that Dame Wendy’s connections with the University have included supporting the work of Tom Nicholson, a professor of literacy education, in his work to halt the “summer slide” in reading ability during the summer break, among children with little access to books. And in 2014, the University signed a Memorandum of Understanding with Sunshine Books for a partnership in the delivery of early literacy professional services in the Pacific.

“Dame Wendy’s career in early literacy resource publication exemplifies Massey’s values of innovate, create, connect,” says Professor O’Neill. “She has made a remarkable contribution to literacy education in developed and developing countries and, more generally, to the knowledge base of literacy education through innovation in supporting children, families and teachers. She has consistently developed and adapted her programnmes based on sound reading theory and research. She’s had a global impact on the ways in which children are attracted to books and supported in their learning to read journey.”

The woman who has published over 2,000 books also wants to write one, and is contemplating her memoir. But this warm-hearted, tireless 75-year-old literacy champion is too busy right now. There is a new series of animal stories to launch, featuring farm animals and pets, as well as endangered and native species.

One particular animal story has always been close to her heart – a reminder of the sacrifices it takes to be successful. The Little Red Hen, a fable about the merits of hard work, persistence and diligence, says it all if you want to really understand Dame Wendy’s secret to success.