Lead researcher Dr Raj Prasanna shows some of the low-cost seismic sensors that his team has been testing.

The Joint Centre for Disaster Research at Massey University is leading a project aiming to develop a low-cost community-based earthquake early warning system in New Zealand.

The project, co-funded by Massey University and the Earthquake commission (EQC), is sourcing a number of low-cost seismometers and working with a number of communities to see if they would be willing to become part of a research project aiming to trial an earthquake early warning sensor network.

Lead researcher Dr Raj Prasanna of the Joint Centre for Disaster Research says that at present, there is no earthquake early warning system in New Zealand. “In this research project, we want to explore the feasibility of developing an early warning system for earthquakes informed by low-cost internet-based seismometers. The sensors would be installed in community owned buildings to generate appropriate warning solutions for members of the community.”

After earlier meetings at Massey University in Wellington, and in Orewa and Nelson, the research team conducted a workshop with residents in Lower Hutt about owning a private seismometer as part of a possible future network of low-cost seismic sensors that could issue earthquake early warnings. The workshops are co-designed and facilitated by Massey University’s Toi Āria: Design for Public Good.

“Ideally, the sensors hosted by the citizen seismologists would be configured as a network of sensors to test different detection algorithms. The data gathered from the community will help us explore the feasibility of generating warnings using these low-cost sensors. The warning may only be 10 seconds, but it will give people time to take the safety action of “drop, cover, and hold,” says Dr Prasanna. 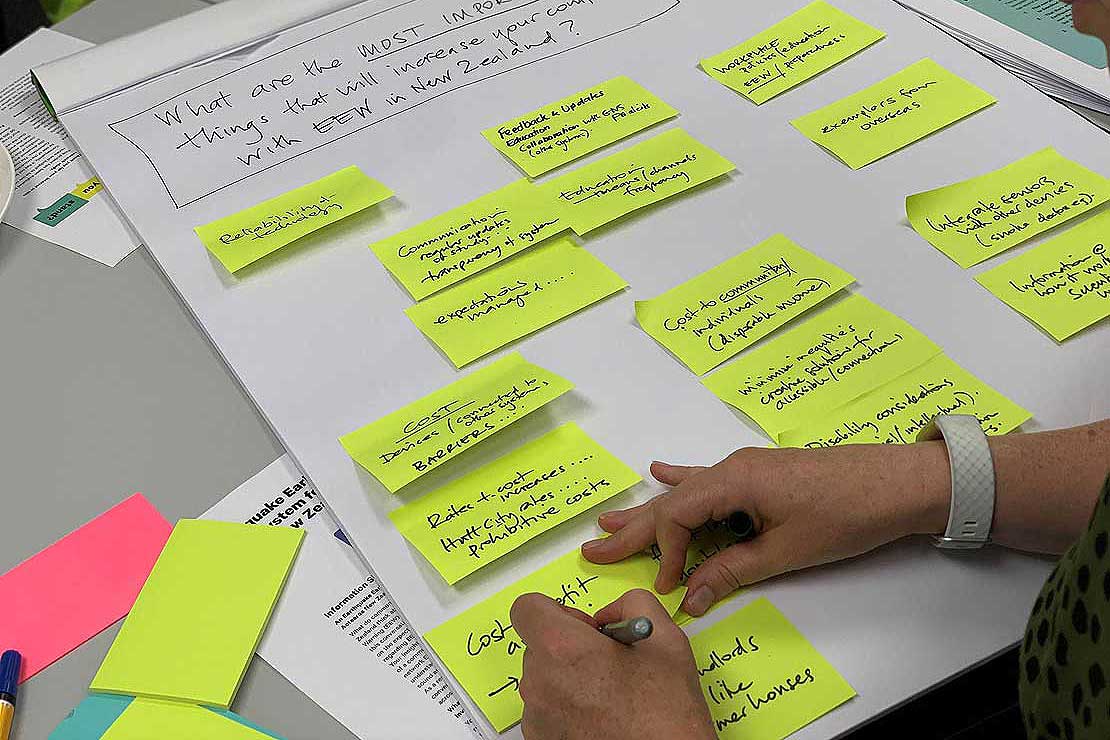 Dr Prasanna says that workshops like the one in Lower Hutt are vital to find out what the community wants.

The work builds on other EQC research by Dr Julia Becker of the Joint Centre for Disaster Research, who last year discovered that there is strong interest among New Zealand residents, businesses and agencies in an early warning system for earthquakes. New Zealand may not have the financial resources of some other countries, like Japan, to replicate their state-of-the-art early warning systems.

The team has been testing a number of off-the-shelf low-cost sensors in the laboratory setting and hopes to start installing approximately 20-25 of the sensors in the middle of the year to conduct field trials.

Once installed, the sensors will be connected as part of a smart internet-based sensor network. If a large earthquake takes down some part of the communication infrastructure, the sensor network would automatically adapt and find ways to reconnect with the remaining sensors in operation if power can still be accessed. Dr Prasanna says that workshops like the one in Lower Hutt are vital to find out what the community wants and to understand the pros and cons of such a system being used by the public.

“These are all really important questions that need some end-user perspectives. At the end of this study, we expect to have a more accurate understanding of people’s thoughts on being part of an earthquake early warning system contributed by members of the community,” says Dr Prasanna.

For more information go to the project’s website  http://crisislab.org.nz/eew/ or contact EQC media manager Coen Lammers on 021-730239 or media@eqc.govt.nz