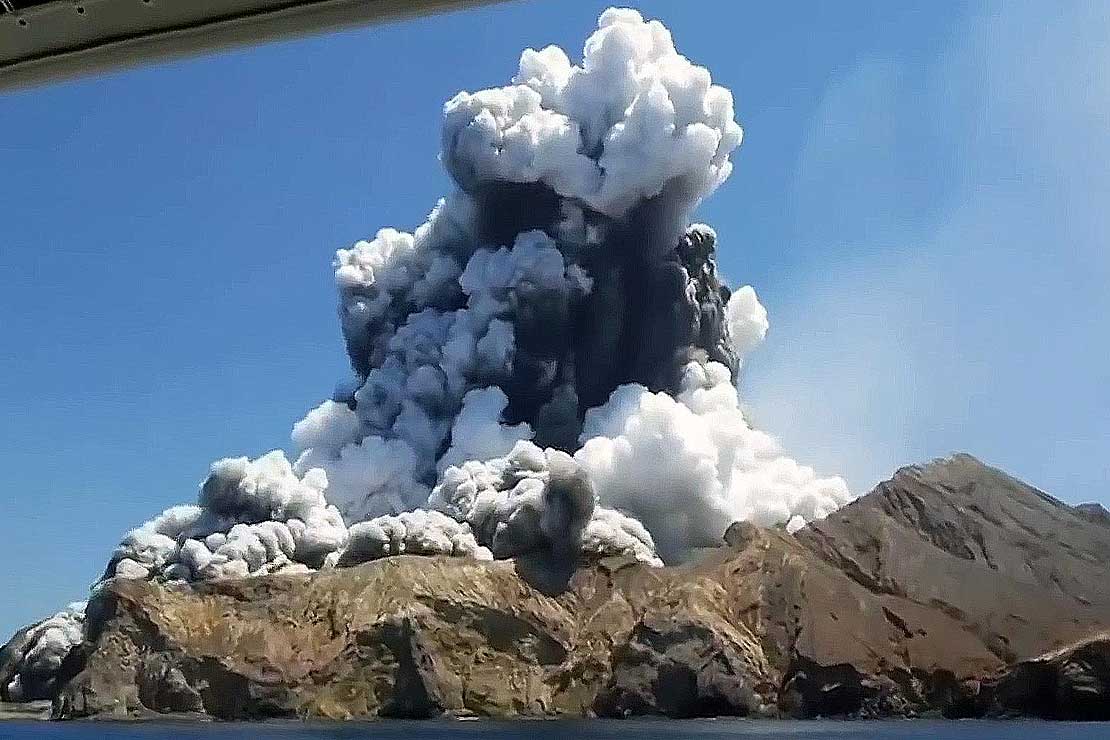 Pyroclastic surges are lethal hazards from volcanoes that exhibit enormous destructiveness through large dynamic pressures of 100-102 kilopascal inside flows that are capable of obliterating reinforced buildings. These hot, fast and turbulent gas-and-ash clouds create far greater devastation to life and infrastructure than can currently be explained scientifically. But why are they so destructive? Until now, the hostile conditions inside pyroclastic surges have precluded measurements of their inner workings and therefore their hazards remain poorly mitigated globally.

A research article just published in Nature Communications, co-authored by a team of scientists from New Zealand, Italy, the United States and Switzerland, provides new insights into this important volcanic hazard process. The researchers show, through large-scale experiments and the first direct measurements inside the pyroclastic surges from the deadly December 2019 eruption of Whakaari (White Island, New Zealand), that it is turbulence that controls and amplifies the destructiveness of these flows.

Dr. Ermanno Brosch from the School of Agriculture and Environment explains, “It is well known that the damage-causing dynamic pressure of pyroclastic surges increases with both their speed and the relative amount of particles suspended inside them. Therefore, traditional hazard assessments rely on estimates of the bulk velocity and bulk density of pyroclastic surges that yield average dynamic pressure values, which can be compared, for instance, with the strength of buildings in the flow path.”

What is not known is how the velocity and density, and hence the destructive force, vary and evolve inside pyroclastic surges. That is why the researchers synthesised them in large-scale experiments using the Pyroclastic flow Eruptions Large-scale Experiment (PELE) simulator in New Zealand. Just like the collapse of a volcanic eruption plume, they heated natural volcanic ash and rock material, dropped it from a height of seven metres into an instrumented channel to generate a two to eight metre high pyroclastic surge that moved at speeds of more than 30 kilometres per hour before colliding with a cliff at runout length of 35 metres.

Professor Gert Lube from the School of Agriculture and Environment says much to their initial surprise, the measurements of dynamic pressure inside their synthetic pyroclastic surges were by no means chaotic.  “Instead, they occurred as two markedly regular sets of pressure oscillations, each showing recurrent peaks almost exactly every 570 and 800 milliseconds. These flow oscillations formed right after impact of the hot mixture on the ground and persisted and raced at high speed through the advancing surge. Importantly, the regular peaks in damage-causing dynamic pressure exceed mean values, which are traditionally estimated for hazard assessments, manifold leading to significant underestimation of the actual hazard impacts. Furthermore, the effect of repeated large pressure pulses on resulting damage is somewhat similar to strong damaging aftershocks in an earthquake sequence leading to successive weakening of building structures. What is also concerning is that the pressure oscillations closely coincided with similarly oscillating variations in the concentration of ash and temperature known to cause immense suffocation and burn hazards. The synchronous peaking of the flow characteristics that cause damage, suffocation and burning hazards is likely to exacerbate the impacts of pyroclastic surges.”

Concurrent with these experimental findings, pyroclastic surges generated during the Whakaari eruption killed 22 visitors to the island and severely injured another 25, marking it as the deadliest eruption in Aotearoa New Zealand since the 1886 eruption of Mount Tarawera.

“Working on the eruption data, we realised that pyroclastic surges, during their runout, had engulfed an array of pressure sensors that usually monitors explosion signals from within the volcano and its vent system. The characteristics of the pressure signals inside the Whakaari surges were the same as in our experimental flows, just that instead of 75 pressure pulses per minute in our experiments, the natural surges showed 12 such pulses per minute,” Dr Brosch says.

The researchers showed that the hazardous pulsing inside pyroclastic surges occurs because the flow energy focusses into and is transported within the largest turbulent eddy structures. They developed a new flow model that allows prediction of these pulses in future volcanic events. This discovery, which is also applicable to snow avalanches, necessitates a re-evaluation of volcanic hazard models that aim to forecast and mitigate volcanic impacts here in New Zealand and elsewhere.

This research was partially supported by a Royal Society Marsden Fund grant), a Ministry of Business, Innovation and Employment Endeavour Research program, and a Resilience to Nature’s Challenges Science Challenge Fund.

The article, Destructiveness of pyroclastic surges controlled by turbulent fluctuations, was recently published with open access in Nature Communications.