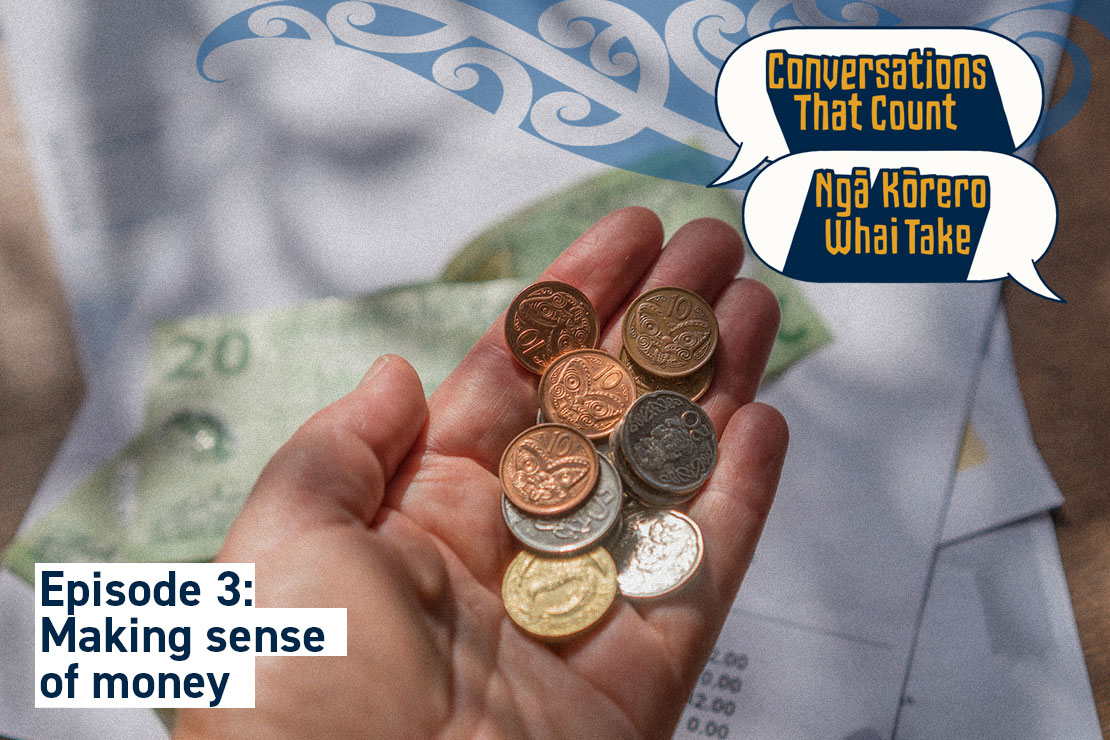 Few topics have such universal relevance in the modern world as money.

In this month’s episode of Conversations That Count – Ngā Kōrero Whai Take, we take a good look at what we really know about money.

No matter how much of it we have, how we make it or how we feel about its role in our lives and societies, few topics have such universal relevance in the modern world as money. In the latest episode of Conversations That Count – Ngā Kōrero Whai Take, we find out how deep our collective knowledge of our financial system actually goes – from its origins to its current state to its still somewhat unpredictable future.

Produced by The Spinoff in partnership with Massey University, this episode sees host Stacey Morrison joined in the studio by Director of Massey University’s Financial Education and Research centre Dr Pushpa Wood and Banqer Chief Executive Kendall Fluety, who co-founded the financial education tech platform.  Together the three cover a broad range of topics over a half-hour, ranging from what we do and don’t know about the future of currency to the challenges of promoting financial literacy to a generation of rangatahi for whom physical money is already a mostly historical relic.

Dr Wood is a highly esteemed educator, appointed as an officer of the New Zealand Order of Merit in 2017 for her services to financial literacy and interfaith relations in Aotearoa. Having designed and delivered financial education programmes for New Zealanders of all ages and levels of expertise, she has a particular passion for ensuring equitable access to that increasingly crucial knowledge.

Given that background, Wood is ever-conscious of the need to find a balance with how that work is carried out, noting that although her field allows practitioners to “make [financial literacy] as simple as you like, or complicate it as much as you like”, in essence the function of money remains a relatively straightforward one.

“Money has come through a few centuries of change, but in its bare minimum form – either a chunk of metal, in terms of coins, or a bundle of paper, in terms of notes – it becomes money only when it takes the function of exchange."

But in a world where both money and that function of exchange is becoming increasingly digital, that previously simple truth likewise becomes harder to quantify. Wood admits that this is a major hindrance for those working in her field.

“The more complicated [the financial system] becomes, the more mystical the form it takes. And it becomes difficult for people in their day-to-day lives to actually understand the full function of money.” For Flutey, the need to ensure our rangatahi have the necessary skills to navigate the strange new world of money is a particularly crucial one. Having studied accounting and economics at university, she spent time at a major accounting firm before quickly realising that wasn’t a long-term path she wanted to follow. She moved instead towards tech, and was inspired by conversations with her younger brother – and one of his teachers – about money and financial education to begin development on what would eventually become Banqer.

With the app she built now being used by more than 150,000 children across Aotearoa, Flutey has a unique insight into young people’s attitudes and understanding of our financial system. And while she’s broadly enthusiastic about some of the ways in which new financial technologies are opening up aspects of the economy which have previously been less accessible – investment in stock markets, for example – she also notes that the country’s current economic conditions seem to be engendering some troubling attitudes.

“I’ve been speaking to a lot of rangatahi recently who actually think it’s easier just to disengage, because they don’t see some of the financial [stability] that their parents or their grandparents attained as being achievable to them.”

Rather than dwelling in doom, though, both Flutey and Dr Wood believe that rethinking our collective approach to money could have tangible benefits. From future-proofing financial education to decolonising and rebuilding our entire system of exchange, this episode explores what those solutions could be, how they can happen, and how we’d all stand to gain from a system that’s just a bit more fit for contemporary purpose.

Does our approach to money need an update? This episode of Conversations That Count – Ngā Kōrero Whai Take seeks to find out. Subscribe and listen now via iTunes, Spotify or your preferred podcast platform.