The study was conducted in two parts at 35 residential age care facilities nationwide. 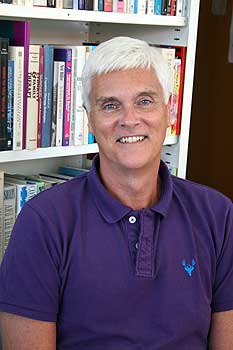 
A Massey University researcher has published a report today on a three-year nationwide research project into intimacy and sexuality in residential aged care facilities with the goal of supporting and developing awareness, policies and education for staff, families and residents.

Massey University Professor of Social Work Mark Henrickson found that while there is excellent work being done in some care facilities, there is much room for regular staff education around intimacy and sexuality, and staff education and workplace policies could help bring consistency in addressing the issue.

He says when there is insufficient staff education, people are forced to rely on their own individual values and beliefs. Some of these beliefs may be shaped by religious attitudes, which can create challenges in in the workplace.

The call for action began more than 10 years ago when Professor Henrickson would present to care providers about sexuality, and each time he was approached by staff voicing their concerns about responding to situations including residents being allowed in a room alone to partake in sexual activity or residents having access to sex workers.

“There were so many difficult and complicated stories people were telling me. I realised what we really need is the solid foundation of research in this area to throw some light on these complex issues,” Professor Henrickson says.

A pilot study at one facility was followed by a feasibility study that included five facilities. Professor Henrickson was then successful in receiving $845,000 as part of the annual Royal Society of New Zealand's annual Marsden Fund in 2017, allowing his team’s research to continue on a national level.

The study was conducted in two parts at 35 facilities nationwide. The first part was a staff survey with questions about knowledge, attitudes, and behaviour around sexuality that was distributed to staff at participating facilities, and 433 were completed and returned.

The survey questions investigated the reliance on personal values for decision makers about sexual issues in the workplace; attitudes towards patients with dementia engaging in sexual activity; and consent and casual sexual relationships within aged care facilities.

The second part of the study involved semi-structured interviews conducted by the project staff with staff, residents, and family members. Altogether, 61 interviews were completed with 75 participants across the facilities, some ranging from a few minutes up to several hours over two days.

“Hearing the richness of people's lives and how they managed their relationships in the third age was really touching and reassuring,” Professor Henrickson says. “The results show people are widely varied in their attitudes, meaning that the sector needs some decision making on the topics alongside stronger staff education.

“It is impossible to write a set of laws, policies, rules, and regulations that will cover every possible eventuality for every kind of person in every place. Our decision-making framework is not set up to encourage individual staff to assess and make rapid decisions in situations that may not be clear, and as a result staff end up making decisions that are better suited to protecting institutions and institutional reputations than to providing meaningful protection for residents.”

Professor Henrickson says it may be, for instance, that a resident with intellectual impairment may not be able to verbally articulate consent, but is clearly enjoying a moment of intimacy with a partner. But if someone has decided that an individual is not able to make decisions for themselves, they may interfere unnecessarily in that moment.

“These decisions will certainly affect a resident’s quality of life and their ability to live life fully.”

Professor Henrickson said the research has revealed a generational effect on attitudes towards same-sex sexuality. Among older New Zealand-born survey respondents (those whose attitudes were likely to be formed before the Homosexual Law Reform Act in 1986), there was less support for same-sex relationships than amongst younger respondents, whose attitudes may have been influenced by an era of greater social acceptance, visibility of gender diversity and sexual diversity, and marriage equality.

“For example, we’re not saying that every facility should provide access to sex workers, but that they should have policies or guidelines about this, for consistency. Staff should be educated about those policies. Further, residents and family members would like to know about those policies when they make choices about long-term residential care.”

“Each facility will have their own challenges. It is not just about intimate engagements, it is also about the legal, moral, and ethical implications that come with these engagements.

Over the past few months, Professor Henrickson and his team have been working with facilities to break the taboo nature of the subject and prompt educators to take a new approach. Some facilities have begun producing podcasts, training videos and other resources to educate their staff.

From the information collated the team then detailed their findings into a final project report What counts as consent? Sexuality and ethical deliberation in residential aged care, a resource he hopes the sector takes seriously.

“This report may be confronting for some facilities, which would be unfortunate as we’re not telling people what’s right and what's wrong, but rather that these challenges are already here and to take them seriously means you’re going to improve your care for all your residents and help your staff feel more confident in the workplace.”

Does our approach to mental health need to be re-written?