School of Sport, Exercise and Nutrition lecturer Dr Claire Badenhorst nailed her first Ironman - winning her age group and scoring a place at the World Championship Ironman race in Hawaii in October.

A year ago, Dr Claire Badenhorst set herself the goal of completing Ironman New Zealand. Earlier this month, she achieved her goal at a stunning pace, winning her age group (25-29) and crossing the finish line in 10 hours, 20 minutes.

Triathlons are not something completely new to her. Around 10 years ago she started competing with the modest “sprint distance” (750 metre swim, 20 kilometre bike and five kilometre run) and gradually worked her way up to longer races.

The Massey University lecturer in exercise and sport science says her involvement in triathlon and personal training is her full-time hobby. “My normal training load involves 18-23 hours a week split among the three disciplines. Broken down that is plenty of pre-five-am starts, then finishing the morning session before Auckland traffic gets too bad, the occasional office lunch time run, then home for an evening session before dinner and bed. Weekends are when I can increase the hours and tick off bigger training days, sometimes as much as  five to eight hours worth of training in a day. While this may sound like madness to many people this is my ‘normal’ – a side effect of doing this sport for such a long period of time,” Dr Badenhorst says.

The days leading into the race were ideal, she says. “I was relaxed, happy and confident that my taper was going well allowing me to absorb the training load and get ready for race day.”

On race morning athletes were treated to ideal weather conditions, which meant a flat lake for the swim, a modest temperature and when the winds did pick up, they would be pushing the athletes back from Reporoa towards Taupo on the second lap of the bike.

“I have been targeting this race for a year and I knew I was in good form going into it, but I was  aware that despite having a ‘plan A’ that I had worked out with my coach, I needed to acknowledge that for an event as long as Ironman you not only need a plan B but probably a plan C,D, E and F too. The best you can do in such events is focus on yourself and aim to control the controllables and hope for mechanical luck,” she says.

Ironman New Zealand is a mass wave start. This means all competitors (male and female of all ages), get in to the water and at the sound of the canon start swimming. Dr Badenhorst says the first 100 metres are like trying to swim in a washing machine. “Thankfully, coming from a swimming background I am usually able to escape the mayhem and find my own space. Being my first Ironman, my coach and I aimed to race as steady as possible throughout the day. I found my rhythm early in the swim and was able to complete the 3.8 kilometre swim in 55 minutes.”

After a quick transition out of the wetsuit, Dr Badenhorst began the gruelling  180 kilometre bike ride, which she says went smoothly 90 per cent of the time. “I did have a drink bottle cage come loose, so I lost a water bottle, but thankfully there are aid stations along the course. I wrapped up the cycling leg in five hours, 30 minutes and was feeling really good. It is amazing what an adrenaline rush you get riding back into Taupo where the streets are lined with spectators cheering you on.” 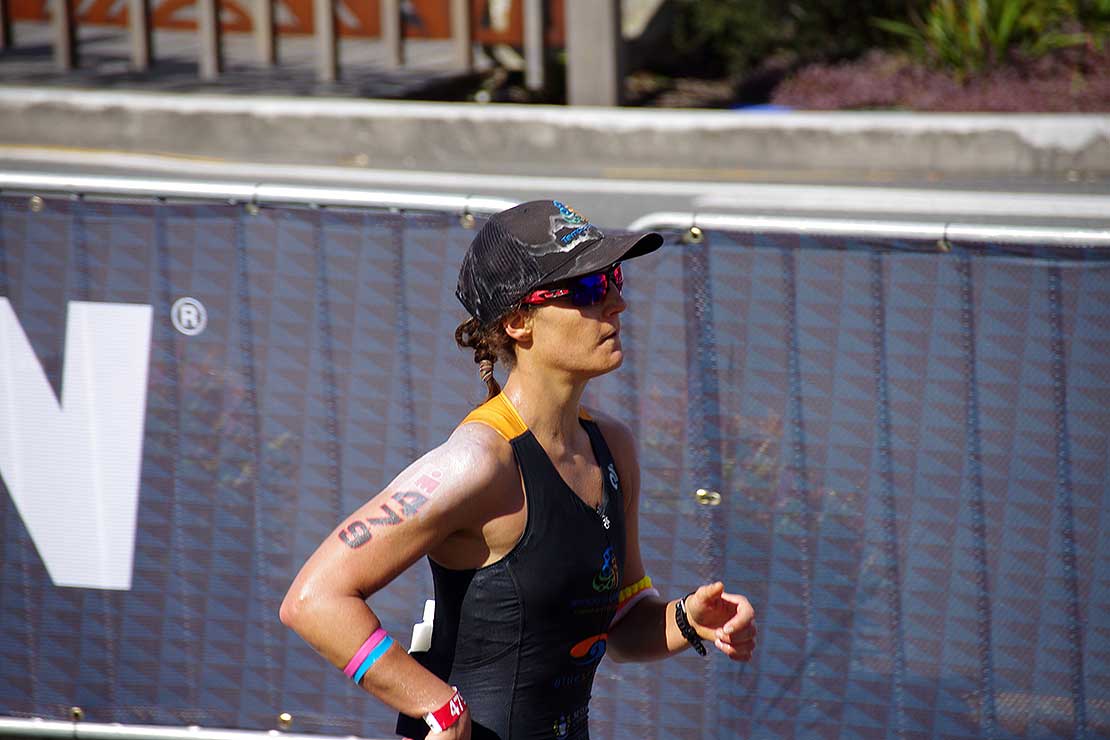 Dr Badenhorst says she can not remember much about the marathon leg of the race. "I think I must have been so focused on what I was doing that I suddenly realised I had two kilometres left to run."

After another swift transition it was time for marathon element of the race – the mammoth 42.2 kilometre run.

“The run in a long distance triathlon is where you find out if you have gotten your nutrition and hydration correct. By this point you’ve been racing for more than six hours and the saying ‘it is 90 per cent mental and 10 per cent physical’ could not be more true. I knew a strong biker in my age group was ahead of me but I had a set pacing strategy and I knew I could run the distance well if I stuck to my race pace and plan. I was surprised when I passed her four kilometres into the run then as I was rounding out the first lap of the three-lap course a friend on the side-line told me I was holding down the lead position in the 25-29 age group. I had two laps to go and knew that if I focused on the training that got me here, I would be able to hold onto the position,” she says.

“Ironman is incredible and the support you get from the side-lines from people you know and even those you don’t, can really carry you through those final stages of the marathon. In all honesty I cannot recall too much of the marathon – I think I must have been so focused on what I was doing that I suddenly realised I had two kilometres left to run."

She says it was at this point, some advice her coach had given her came into her head.

“Run these last two kilometres as hard as you can. It is your choice to be either the sufferer or the demolisher. Be the demolisher Claire! And at the last aid station grab water and wash your face for the finish line – they take pictures! Nothing like a good bit of humour to drive you to the finish line!”

Dr Badenhorst says the finishing shoot of Ironman is something no words can describe. “You don’t feel much physically but you go through many emotions, including relief, happiness and excitement to name a few. To hear the words ‘you are an Ironman’ shouted over the loud speaker is truly amazing. I crossed the line in a time of 10 hours and 20 minutes and was caught by some of the amazing volunteers at the finish. I was then taken to recovery and had to spend a bit of time in medical after losing 4.5 kilograms on race day. After getting some fluid and solid food on board, I was able to reflect on my achievement of racing and finishing my first Ironman.”

The win also gave Dr Badenhorst the chance to compete at the World Championship Ironman race in Kona Hawaii in October, as well as picking up the National Long Course New Zealand Championship.

“I am very fortunate in that I have the support of a number of people and companies that have helped me to achieve this goal and will be there with me as I work towards Kona, including BlueSeventy Wetsuits, Shoe Science Albany and Massey University. Following some rest and recovery, I will start more structured training next month and look to build towards this race. Being a member of Triathlon New Zealand means that I will be representing New Zealand at this World Championship race, something I am very excited to do.”

Staff suffer to win the "Suffer" Half Ironman