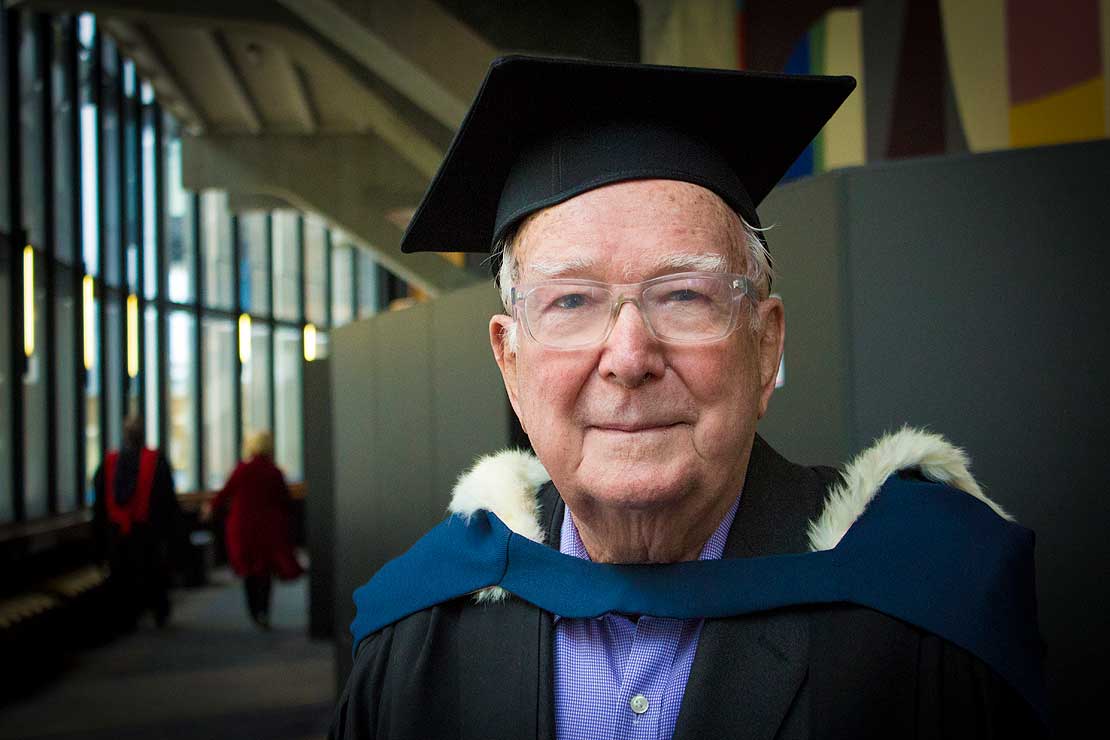 Keeping his mind active, having an interest to fill his days and being able to contribute to conversations are among the benefits of studying in later years, says Bachelor of Arts graduate John ‘Jo’ Rimmer, aged 86.

Mr Rimmer, who was capped at Massey University’s College of Humanities and Social Sciences' graduation ceremony in Wellington yesterday, is a reminder there is no limit to life-long learning. He says he wasn’t sure if he was up to the task of academic study when he first enrolled as a Bachelor of Arts (BA) distance student eight years ago, at the suggestion of his granddaughter. But he found that doing one paper per semester provided him with the right amount of work. He surprised himself at being able to develop the self-discipline required to meet assignment deadlines, gaining an A-minus average over his degree.

It was not his first experience of university, however. An Englishman, Mr Rimmer studied law at Oxford University in his early 20s and gained an Masters degree but decided not to pursue law as a career. He moved to London to work in marketing for Unilever, and in 1962 re-located to New Zealand with the company. He married here, had two daughters then returned to the UK in 1978.

On returning to New Zealand in 2007 “at an advanced age, I looked for something to do which would keep my mind active and usefully occupy my spare time,” he says. “I found this in taking an external degree at Massey.  At one subject per term for eight years I have finally acquired my BA at the age of 86.  I have absolutely no regrets, having both enjoyed and benefited from the experience.”

As a politics major, he says “I’m sure [the degree] has influenced me and changed my thinking. I learned a lot of things that were new to me.”

He has found his right-wing ideas challenged to some extent. “I’m a right-winger economically and soft-right socially,” says Mr Rimmer, who draws on his reading and studies to share a knowledgeable opinion. “Quite often things come up in conversation and I find I have something worthwhile to contribute.”

Distance study but not disconnected

Being able to stay in his central Wellington apartment to study has been the key to doing his degree – he says he would not have been able to attend lectures on campus everyday. And distance learning has not meant feeling disconnected, he says.

“In these eight years I have been in a position to see the gradual transformation in distance study from little more than an electronic postal service, step by step, into an almost total teaching and learning experience, often complete with live lectures. I even had to make my own online presentation in one.”

He does assignments on his computer, no longer handwriting first drafts. One thing he noticed was the absence of others of his generation. “It has surprised me that in my rare [face-to-face] contacts with other students, at exams and a very occasional contact course, I have met no one of my age and virtually no one even half of it.”

He hopes that tertiary education rules governing the time allowed to complete a degree will not become more restrictive, saying he needed the eight years it took him to complete his degree, as might others in his situation considering later life study.

Despite suffering a mild heart attack three months ago which resulted in having a stent inserted, he is considering further study but plans to take a gap year first to attend to things he put off because of study commitments.

Study, he believes, has definitely helped to maintain his brain power. “I was not so much concerned with getting a degree as with studying for it,” he says. “Nevertheless, it gives me great pleasure to receive one now.”