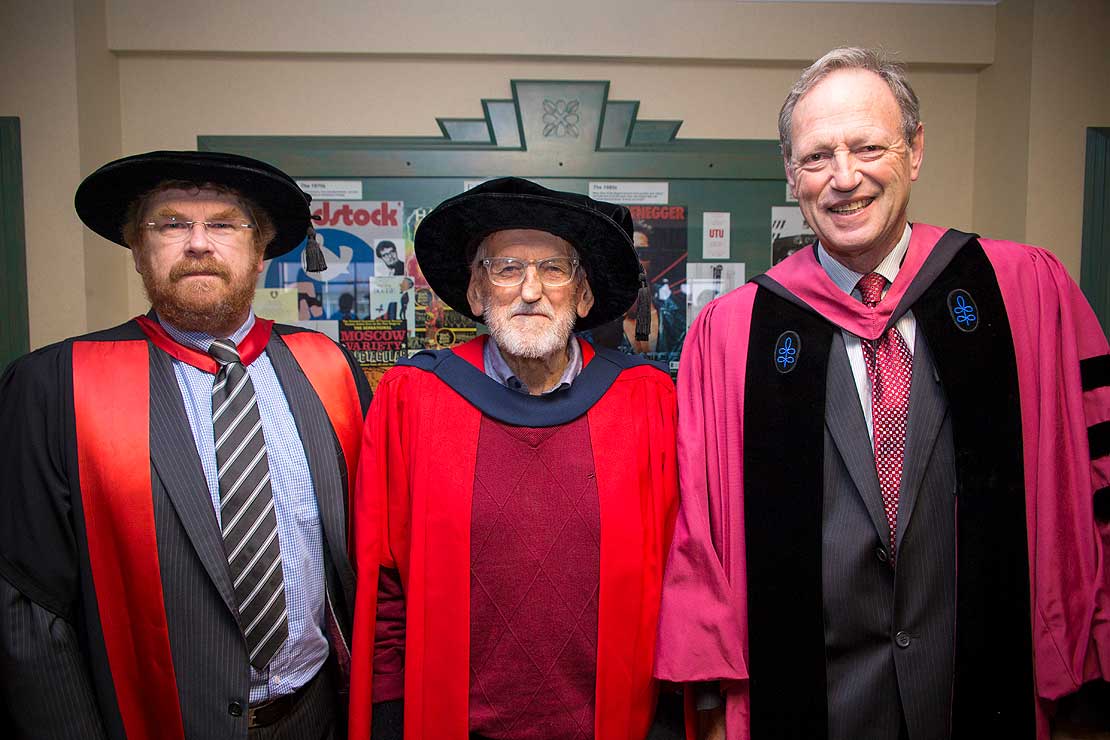 Dr Dick Scott (centre) at his 2016 graduation in Palmerston North to receive an honorary doctorate, pictured with head of the School of Humaniities, Associate Professor Kerry Taylor (left) and historian and author Dr Jock Phillips. 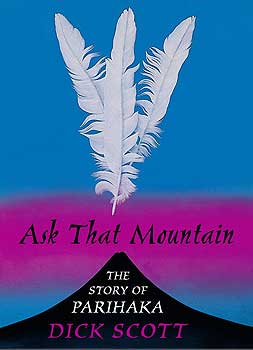 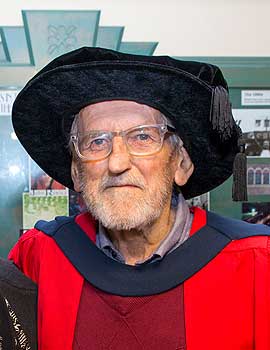 
Historian and journalist Dick Scott, author of the ground-breaking story of Parihaka, Ask That Mountain, is being remembered for his contribution to sparking a change in Pākehā consciousness about colonialism.

Dr Richard (Dick) Scott, a Massey alumnus, died on New Year’s Day, 2020, aged 96. He was awarded an Honorary Doctorate from Massey’s College of Humanities and Social Sciences in 2016 in recognition of his writing and research that challenged and influenced a new generation of history scholars.

“In Ask That Mountain, a revised version of the earlier The Parihaka Story, he exposes the power of the state and the lie of the self-congratulatory notion of New Zealand having the best race relations in the world,” says Dr Taylor. He says the book was “fundamental to a change in Pākehā consciousness to the darker reality of colonialism.”

In his account of the 1951 waterfront lockout, titled 151 Days, Dr Scott captures “the dark days of that winter of discontent with an energy and immediacy, lost by subsequent more dispassionate accounts,” says Dr Taylor, head of the School of Humanities.

“These two books may seem very different in focus, but share a theme of emphasising peoples’ power to resist oppression and build movements to sustain and support their own interests. In 2020 these themes are as relevant as they ever were. Scott's fearlessness and bravery to speak out is a part of the rich legacy he leaves us.”

His achievement could be traced back to 1954 when Dr Scott’s pioneering work, The Parihaka Story, was first published, the forerunner to Ask That Mountain. “That was the year when a young Queen Elizabeth toured the country and we all waved Union Jacks, we were fat and smug on sales of wool, meat and butter fat, and we prided ourselves on having ‘the best race relations in the world’.

“Some years before, a 21-year-old Dick Scott had summarised what he found in the Whanganui public library in writings about Māori. ‘Emphasis on glorious past and noble natures without facing the other side.’ The country’s university historians taught the history of Europe or Britain and its empire, and if they did local work at all it usually focussed on colonial missionaries. In this environment, The Parihaka Story should have been, if noticed by the historians at all, a bombshell.”

Dr Phillips said the story began with the confiscation of Māori land in Taranaki. In defending their land Te Whiti and his followers developed a revolutionary response – non-violent assertion of Māori rights to their own land by ploughing and fencing.

“When the forces of the state arrived, as they did in numbers on Guy Fawkes Day 1881, they would offer no resistance,” he said. “Offenders were imprisoned and held for years without trial, many in far-off Dunedin. It was a deeply shaming story that exposed the state’s total disregard for both the law and human rights. But it was also inspiring in highlighting the visionary non-violent leadership of Te Whiti and Tohu that bore comparison with the ideals of world leaders such as Ghandi or Martin Luther-King.”

For a time the book was little studied, he says. “But when Dr Scott re-wrote it as Ask that Mountain in 1975 even historians began to take notice. For many people, historians, activists, concerned New Zealanders, it was the moment when the scales fell from the eyes and we (and I include myself) began to see Māori and New Zealand history afresh.  In my view, no other work of history has had such an impact on New Zealanders’ view of their world, and while I am mainly talking about Pākehā there were many Māori, Syd Jackson a good example, for whom the book was equally transformative.”

Dr Scott said at his graduation in 2016 that Ask that Mountain was the historical work he was most proud of. “Parihaka was my best piece of work because it got to the truth of things for Māori, a truth that had been buried,” he says. “I don’t have any Māori blood but I did want to correct the record. I was able to tear off a few blankets of the cover up.”

Dr Scott was brought up on a farm at Whakarongo, near Palmerston North. He attended Palmerston North Boys High School, then studied for two years at Massey for a Diploma of Agriculture. He studied herd-testing, not history, to become a sharemilker. He began reading about socialism, joined the Communist Party, became a working journalist, and then found himself in the thick of the 1951 lock-out editing the watersiders’ paper, the Transport Worker, and working on illegal bulletins.

Then came The Parihaka Story. “His experiences made the book possible,” Dr Phillips said.

“Because he was socially engaged, he was committed to uncovering the story of the oppressed; and although he had not met a Māori person until the age of 20 and did not know te reo, he recognised injustice immediately when he came across it and became convinced the story should be told.”

Dr Scott went on to write local histories of the Auckland area that culminated in Seven Lives on Salt River, featuring fascinating personalities of the Kaipara Harbour. It won both the New Zealand Book Award for Non-Fiction and the J M Sherrard prize for regional history. Histories of wine-making, and New Zealand trade and colonial maladministration in the Cook Islands and Niue, followed, along with his autobiography, A Radical Writer’s Life. In recognition of this body of writing, Dick Scott was awarded the Prime Minister’s Award for Literary Achievement (Non-Fiction) in 2007.

What does Parihaka teach us about nationhood?
Academic acceptance for Parihaka historian