Taking a deeper look at the cannabis question 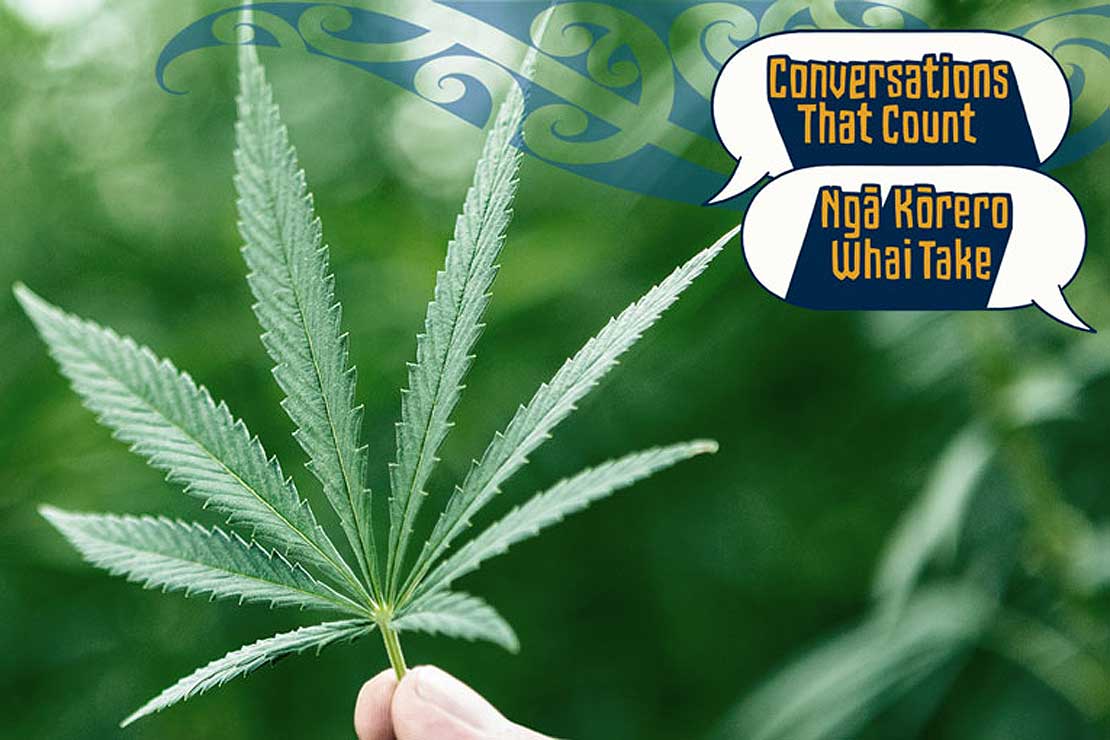 In the second episode of Conversations that Count – Ngā Kōrero Whai Take we take a look at the detail and implications of the upcoming Cannabis Legalisation and Control referendum.

The debate around whether or not cannabis should be legalised for recreational use in this country is a long-running one, and one which remains contentious. Barely more than a month from the day of the referendum on New Zealand’s Cannabis Legalisation and Control Bill – and just weeks from our original, pre-Covid election date – opinion polls reflect a country whose voting intentions are still split near-evenly.

With the bill and referendum proving so divisive, and with campaigners on both sides of the issue significantly ramping up their marketing efforts, we felt that this was an issue in need of closer examination. Produced in partnership with The Spinoff, this episode of Conversations that Count – Ngā Kōrero Whai Take sees The Spinoff Ātea editor Leonie Hayden ably filling the shoes of regular host Stacey Morrison, joined here by Massey University Associate Professor Chris Wilkins and Hāpai Te Hauora chief executive Selah Hart for an insightful, wide-ranging kōrero about the impending referendum. The episode covers not only the particulars of what we’re being asked to vote on this October, but the potential implications of either outcome, as well as what our guests see as the most critical downstream factors for consideration should the referendum pass. For Massey University’s SHORE & Whariki Research Centre leader Dr Chris Wilkins, the polarisation of the issue drives home the need to make available clear and impartial information about the bill and referendum.

“As a research group, we think it’s really important that people can trust the evidence and the analysis that we present, and that’s essentially what we’ve been trying to do: present evidence from overseas jurisdictions that have already legalised cannabis, and our knowledge of drug policy in general. But given that it’s a referendum, and it’s a kind of competition between ‘yes’ and ‘no’, there’s been a lot of overpromising from people that are in favour, as well as demonisation from people that are [against the bill].”

Dr Wilkins believes that, were legalisation to proceed, the ideal outcome would be a market in which only not-for-profit organisations would be able to participate – prioritising community and iwi groups, especially, and those who can provision services to ensure that young people have better access to recreational options that don’t include drugs or alcohol. Hart, a public health professional with more than a decade of experience in the sector, has been clear in the past about what her organisation sees as the need for any prospective legalisation programme to prioritise outcomes for Māori communities, but she also acknowledges that the path to iwi participation in a regulated cannabis market isn’t necessarily a straightforward one.

“We’ve got some iwi that are very strong in their position that it’ll be ‘no’ for them, they’ve seen too much harm. So we need to strike that balance; if there are rohe in Aotearoa that are an absolute no [on legalisation], how are we going to ensure that the protective mechanisms of iwi partnership exist? And how do we ensure that the government’s going to [meet] their Treaty responsibilities? We’ve got to make sure that the execution of whatever it is we land on is done in the right way.”

Much has been said about the contemporary application of the existing law, with some arguing that following the passing of last year’s Misuse of Drugs Amendment Bill, the criminalisation of cannabis has dramatically reduced. But while the Prime Minister’s Chief Science Advisor has referred to the current approach as one of ‘soft decriminalisation’, critics say that its impacts have been vastly overstated. The issue is one that remains top of mind for Hart who, while having legitimate concerns with the potential health ramifications of cannabis use, is concerned with what she sees as the inequities in the way that the current law is applied.

“We have nannies that have had to raise their grandchildren because of the incarceration rates of Māori males being picked up for low-level drug offences. So when we’re trying to strike that balance, we need to strike it from a place which reduces harm from a health perspective and also from a justice perspective.”

Hart is concerned that a ‘no’ vote would lead to a retention of the status quo, which in addition to not addressing the concerns around criminalisation would also mean forsaking the downstream benefits of bringing regulation to the cannabis market.  She points out that, under the current regime, “We have no control over the current market. We don’t have a tax take that can support more investment into health services or social services.”

Regardless of how the results of the referendum fall, both Wilkins and Hart believe it’s crucially important that people feel they have enough information to make their vote count – and that they feel empowered to express their own feelings at the ballot.

“I think that everyone needs to have the opportunity to weigh up both sides,” Hart says, ”We need to share both pros and cons – what we think are the most positive parts of this, or the most negative parts of that – and then give the mana motuhake to those people to make their own decision and make their own call based on their own values, and what [their vote] means to them and their whanau.”

For more information about the cannabis referendum and to help you work out your stance on the issues needed to consider before you vote, visit Cannabis Convo.

This is the second episode of Conversations That Count – Ngā Kōrero Whai Take which is out now. Subscribe and listen via iTunes, Spotify or your preferred podcast platform.