Home > About Massey > News > The grasshopper becomes the master

The grasshopper becomes the master 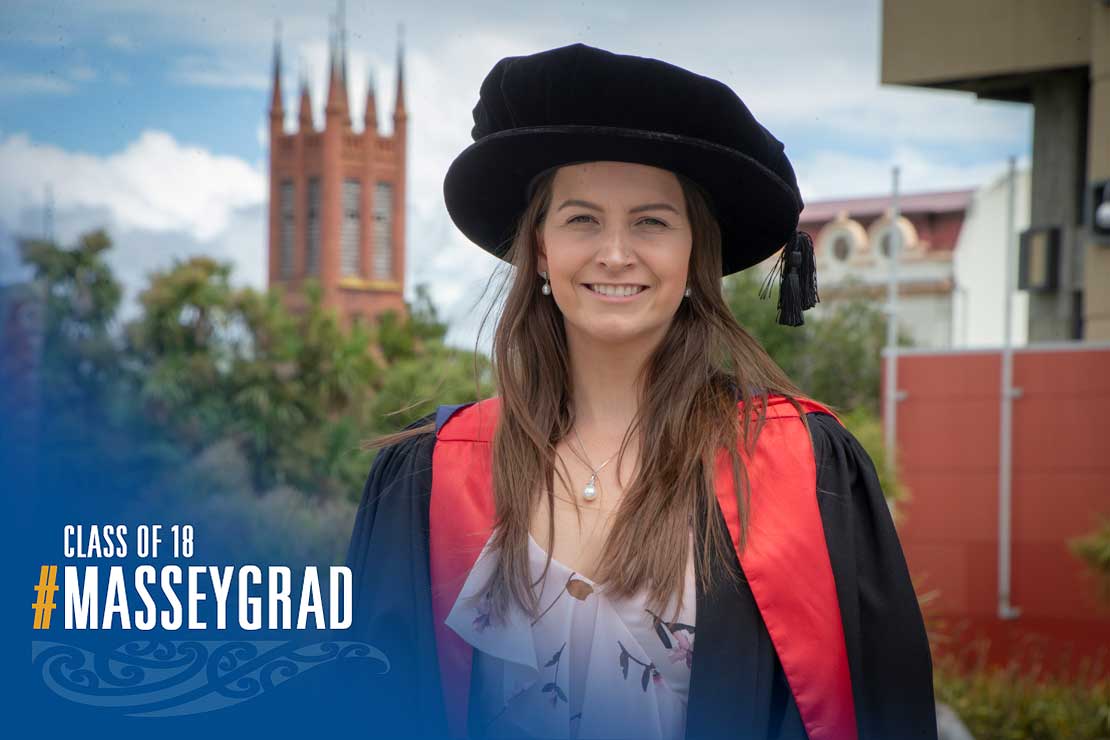 New Zealand's alpine grasshoppers can freeze to endure the winter, but Dr Emily Koot never resorted to such drastic measures to survive her PhD.

For eight and a half years Dr Koot made Massey her second home, bonding with a tight-knit group in the Ecology department, but last week she graduated with more than four hundred other Massey University students at the Regent on Broadway.

“Very little research has looked at how climate change may affect plants and animals in New Zealand,” Dr Koot says. “The alpine zone makes up a large part of the New Zealand environment and by looking at how climate change may impact our alpine grasshoppers, we can see how it may affect other animals living in the alpine zone as well – to see if they too are at risk.”

Dr Koot first looked at who the grasshoppers were related to and where they had lived in New Zealand in the past. She modelled where suitable habitat for the grasshoppers would have been approximately 15,000 years ago using climate data for that time period. She then compared this to where they are found now, and modelled where we might find then in the future, when the climate is warmer. This allowed her to see if a warming climate would change their distribution, and if they would be found in more or less places in the future.

Of the 12 species she studied, she found that the distribution of all 12 is predicted to shrink (or contract) as their habitat disappears and for three species she focused on, this would also mean a reduction in genetic diversity, with some species at risk of extinction.

“Research like this demonstrates how there will be consequences to inaction on climate change– species globally are at risk of extinction, and many ecosystems will be at risk of collapsing if societal changes, like the reduction in greenhouse gas emissions, are not implemented more readily.”

“One of the things I find most interesting about my research is that New Zealand’s alpine grasshoppers are most closely related to alpine species from Tasmania, and that their ancestor arrived in New Zealand approximately 12 million years prior to alpine habitat in New Zealand. This was unexpected, as all the alpine grasshopper species are specifically adapted for alpine living – they can freeze and unfreeze to survive through cold snaps and winters at any life stage. No other grasshopper species in the world has that ability. All 12 species were established in New Zealand prior to the formation of the Southern Alps, so it is likely that they shared this trait with a common ancestor and maintained this adaptation for millions of years, until alpine habitat became available.” From the farm to the lab

Growing up on a dairy farm near Oroua Downs, and later moving to Palmerston North, science wasn’t always her focus. She developed a passion for inline speed skating – a sport she pursued for 8 years – taking her around the world.

“In high school I started taking an interest in the environment, as the concerns around climate change began to gather more attention. Farm life had instilled in me a major love and appreciation of animals, and I felt an urge to do something with my life that could do good - perhaps for the environment. I started out at Massey doing a Bachelor degree in Resource and Environmental Planning, although after a semester I felt it wasn’t hands on enough for me. So, I decided to pursue a Batchelor of Science, with a double major in Ecology and Zoology, not knowing exactly where it would lead me, but knowing it was a subject I was passionate about, and loved learning about.

“During my Bachelor’s I found so many facets of Ecology/Zoology interesting and I just really wanted to know more.”

“I really enjoyed my time at Massey, especially as part of the Ecology Group and the Phoenix Lab Group. I initially chose Massey because it was local, I could live at home, and it had the course that I wanted to do. But I chose to stay at Massey for the entirety of my tertiary study because it has a great team of Ecologists and Zoologists. They are experts in their field and are recognised both nationally and internationally. They are also amazing, kind and helpful people and the Ecology Group quickly became like a second home.” Dr Koot on one of the many grasshoper hunts.

“By the end of my Batchelor’s degree, and after meeting some PhD students, I decided that I wanted to continue studying and expanding my knowledge base and skillset. I also wanted to be able to get a job as a scientist at the end of it all, and a PhD seemed like the best option.”

Under the supervision of Professor Steve Trewick and Professor Mary-Morgan Richards, her idea for a PhD grew. They developed her project, bringing together her interests in climate change, ecology, genetics and entomology. The study helped by funding from the Miss E. L. Hellaby Indigenous Grasslands Trust and the Massey University Vice Chancellor’s Doctoral Scholarship.

“I think I was very lucky during my time studying, as I didn’t encounter some of the obstacles that my peers did, like health problems, raising a family etc. For me, my greatest obstacle was learning how to manage my stress (especially during my PhD), learning to believe in myself and my abilities, and learning how to persevere when perhaps things weren’t going so well with my project, or I was losing motivation.

PhD’s take a huge toll on your mental health that people don’t really warn you about prior to starting, they’re a massive rollercoaster ride, but once you learn to ride out the lows and enjoy the highs, things become more manageable – and eventually you see the light at the end of the (very long) tunnel. I think completing a PhD (and other degrees) requires perseverance just as much as or more so than brain power.”

It seems her hard work has paid off, as Dr Koot was employed this year by Plant and Food Research. She is currently working as a scientist for the Mapping and Markers team. The team uses genetic tools to understand key genetic characteristics of plant species that are of importance to New Zealand. For example, developing genetic markers for selecting kiwifruit cultivars faster, and discovering the reasons behind Manuka’s uniqueness.

However, her life in academia is far from over and Dr Koot is also in the process of writing additional papers from her PhD research.