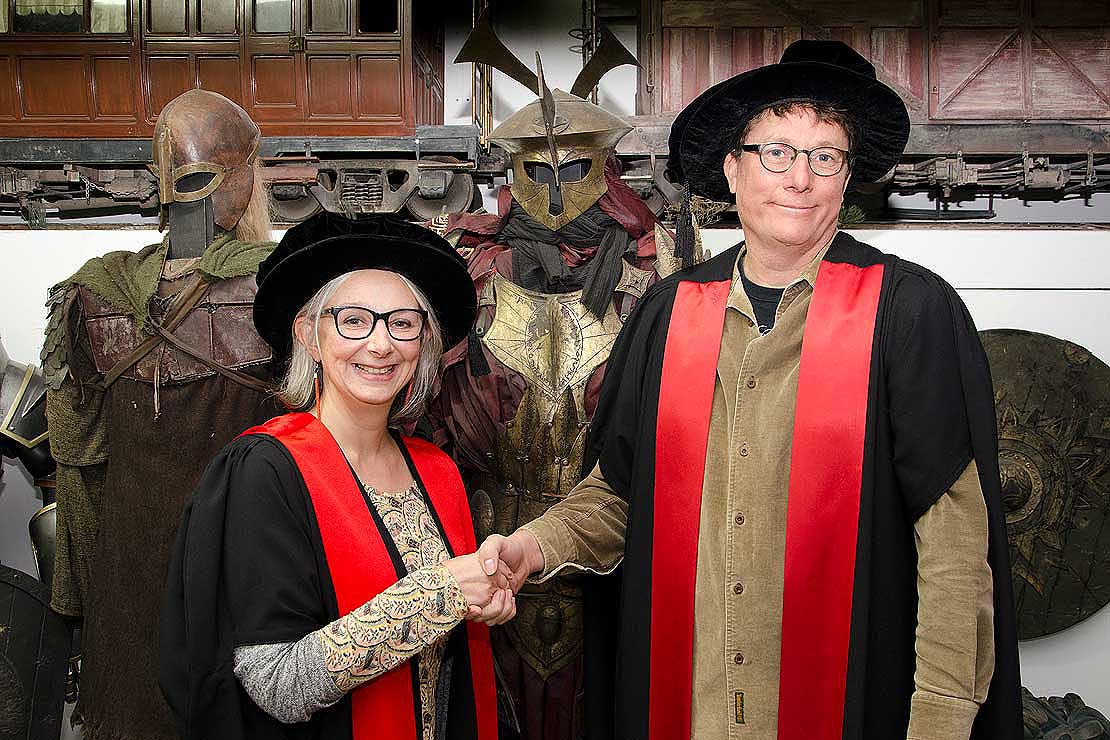 Design and effects wizard Sir Richard Taylor has been appointed an honorary professor of Massey University, in recognition of his contribution to New Zealand’s creative industries and the long-standing relationship he enjoys with Massey’s College of Creative Arts.

Sir Richard, who is owner and co-founder of award-winning design and effects company Weta Workshop, is an alumnus of Wellington Polytechnic – a forerunner institution to the college.

Pro Vice-Chancellor Professor Claire Robinson says Sir Richard’s active and continued association with the college, including its latest collaboration in concept design with Weta Workshop, was reinforced with the announcement of his honorary professorship. In 2007 he also became the first person to be inducted into the college’s Hall of Fame and in 2011 he was conferred with an honorary doctorate of Fine Arts by Massey University. The honorary professorship, however, is an appointment offered to distinguished members of the community with relevant professional qualifications and experience, and to people who have achieved the highest level of vocational or professional achievement, and proven capacity of leadership in their field.

“Sir Richard has played a key role in the development of New Zealand’s special effects industry and our international reputation in filmmaking, and he is internationally recognised as a leader in concept design – bringing stories to life by creating conceptual worlds, memorable animated characters and immersive gaming experiences,” Professor Robinson says.

“Very few have achieved the same level of practical application in these disciplines.

“His gift is that he is prepared to share his knowledge and encourage others through learning and inspiration. In Wellington this desire has created a pool of superb talent and the world now comes here to learn from the best.”

The course will give students a dynamic range of skills to start their career in concept design and visual storytelling in the entertainment industry.

The partnership of award-winning Weta Workshop and the internationally recognised Massey University delivers an exclusive educational experience, Professor Robinson says. Students learn from and engage with some of the industry’s finest concept designers as they work towards a Master of Design (Entertainment) qualification from New Zealand’s premier Design School, ranked in the top 100 Art and Design Schools in the world.

Long before the introduction of this exclusive offering, Sir Richard has given back to the College and its students through workshops, guest lectures and mentorship, as well as encouraging his staff to do the same, Professor Robinson says.

“Weta has consistently provided a place of aspiration and inspiration for young designers and digital animation graduates – this collaboration and Sir Richard’s professorship formalises this incredible opportunity.”

In accepting the honorary professorship Sir Richard says Massey University, and the College of Creative Arts in particular, have played a significant part in shaping the ongoing creative capabilities of the team at Weta Workshop.

“Many of our best and brightest have graduated from this learned institution - just as I myself did, back in the University’s former incarnation as Wellington Polytech - and our workshop has the great fortune of being situated just a short distance from the campus. It is therefore truly humbling to be acknowledged with this honorary professorship. It is my hope that my ongoing actions and enthusiasm for inspiring the young creative students of CoCA will justify this most prestigious honour bestowed upon me by Pro Vice - Chancellor Claire Robinson and the Massey faculty.”

Weta Workshop co-founder to lecture on collaboration and creativity