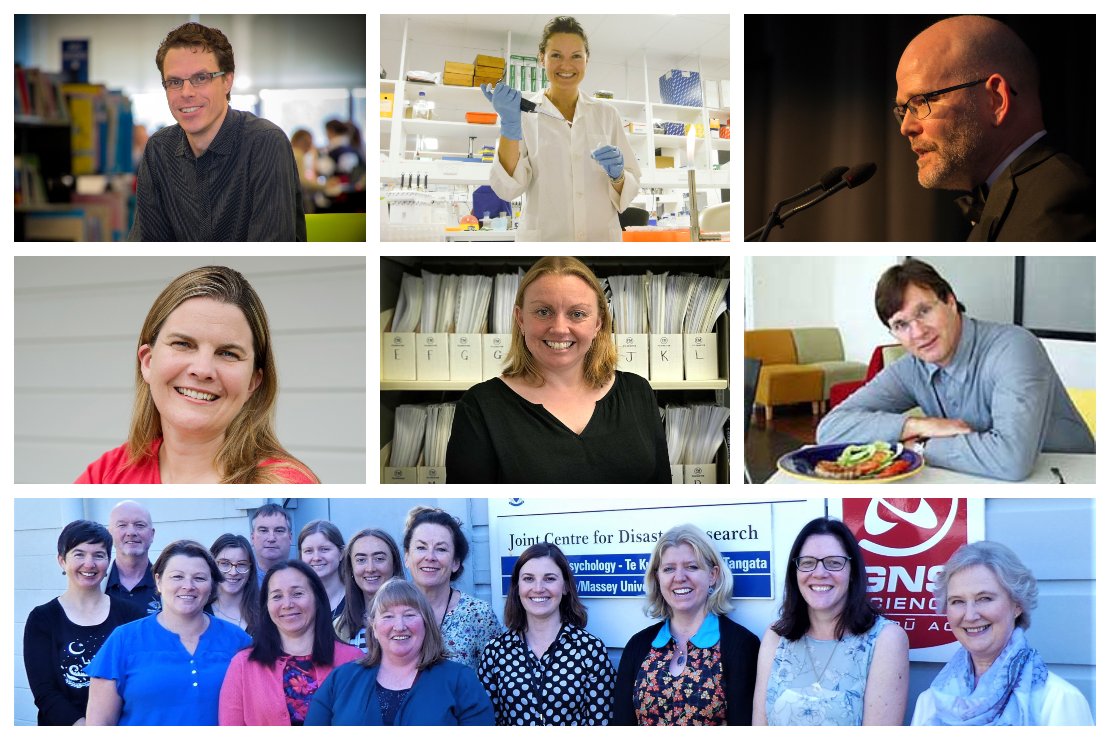 Massey University’s Joint Centre for Disaster Research team are among the winners of the Massey Medals this year for their diverse work on disaster risk management, from developing resilient communities to providing insights on the recent Whakaari/White Island eruption.

The medals honour an exceptional body of research carried out by staff over a period of years. Massey University Provost Professor Giselle Byrnes says that this year the selection committee had a particularly challenging task, given the strength of the field.

“This year we have awarded joint winners for two of our research medals because of the exceptional talent of those nominated,” Professor Byrnes says. “This is evidence of the high quality of our researchers here at Massey, across a broad range of disciplines and subject areas.”

The choice of recipients aligns with Massey’s research strategy, He Rautaki Rangahau – a commitment to “ensuring that our high-quality productive researchers are valued and celebrated,” she says.“Massey supports world-class research that has real-world impact and these awards make good on that commitment.”

The Joint Centre for Disaster Research team, inside the College of Humanities and Social Sciences’ School of Psychology, has been awarded the Research Medal – Team for 2019. It entitles them to a $25,000 grant for research in 2020.

The medal recognises the centre as “a multi-disciplinary team with an outstanding national and international reputation” and for its “commitment of all team members to research excellence that connects with the wider society.”

Highlights for the team this year included facilitating the first of a national series of workshops following the GPDRR (Global Platform for Disaster Risk Reduction) in Geneva at the Royal Society of New Zealand Te Apārangi in Wellington. The workshops are aimed at connecting New Zealanders to global disaster risk reduction research.

Professor Murray Cox is the individual winner of this year’s Massey University Research Medal. He is one of the world’s foremost authorities on the genetic history of South East Asia and the Pacific. His landmark research has triggered major advances in our understanding of human prehistory across the Pacific region, particularly the effects of contact, interaction and adaptation; the nature and extent of genetic mixing between archaic and modern hominins; and the dynamics of social behaviour, language, kinship and genetics.

Some of his major breakthroughs have included finding that Asia was at the heart of archaic human diversity; identifying sex biases in the genetic ancestry of the first settlers to reach the remote Pacific; reconstructing the migration processes by which Indonesians initially settled Madagascar; and quantifying for the first time how genetics, kinship and language interact and co-evolve.

Dr Liggins is an evolutionary ecologist who primarily uses molecular genomic methods to address fundamental questions in biodiversity and ecosystem science, and to support local communities. Her main academic research contributions have been in the field of ‘seascape genetics’, drawing on population genetics, spatial statistics, and marine ecology.

She serves on several international working groups intended to advance theoretical and applied molecular ecology via multidisciplinary collaboration, and leads New Zealand’s participation in the Diversity of the Indo-Pacific Network and coordinates the Ira Moana – Genes of the Sea – Project.

Dr Beck is a registered dietitian and senior lecturer in human nutrition and dietetics based at the Auckland campus. Her research focusses on optimising health through nutrition, specifically iron deficiency, sports nutrition, dietary assessment, and dietary patterns and health outcomes.

She has received more than $2.2 million in competitive external research funding, has published 39 manuscripts in international peer reviewed journals and has published two book chapters, where she was first author in both. Her research has been referred to in World Health Organisation policy documents, and she has co-authored New Zealand Ministry of Health Food and Nutrition Guidelines.

Marine biologist Associate Professor Karen Stockin is working on New Zealand’s first attempt to satellite tag stranded whales in order to address survivorship post-release. Based in the School of Natural and Computational Sciences, she is currently spearheading the instigation of a Global Strandings Network, involving several key international government organisations including the Convention for Migratory Species and the Marine Mammal Commission.

Dr Stockin is recognised for her national and international engagement and capacity-building in emergency response and investigation with Project Jonah, the Department of Conservation, and the International Whaling Commission, respectively, alongside her research impact and advocacy with Aotearoa Plastics Pollution Alliance. Her impact in marine mammal welfare and conservation has been felt across New Zealand the world.

Professor French has supervised 41 PhD students and is currently co-supervising a further seven. He is dedicated to providing ongoing mentorship and career development for emerging scientists, many of whom have gone on to impressive careers in academia, international health and government bodies. Three of his previous PhD students are now full professors and three are associate professors.

Professor Morel is a national and international expert on pig growth and nutrition and was chief editor of the Journal and Animal Feed Science and Technology. His combined expertise in biological animal systems and statistics attracts researchers at both junior postdoctoral and doctoral research funding as project leader from governmental agencies, producer boards and commercial companies both in New Zealand and overseas.  Many of his PhD graduates have in their turn become successful academes or researchers in New Zealand and overseas.

The research medals and awards will be presented at the University’s Defining Excellence awards March 2020.