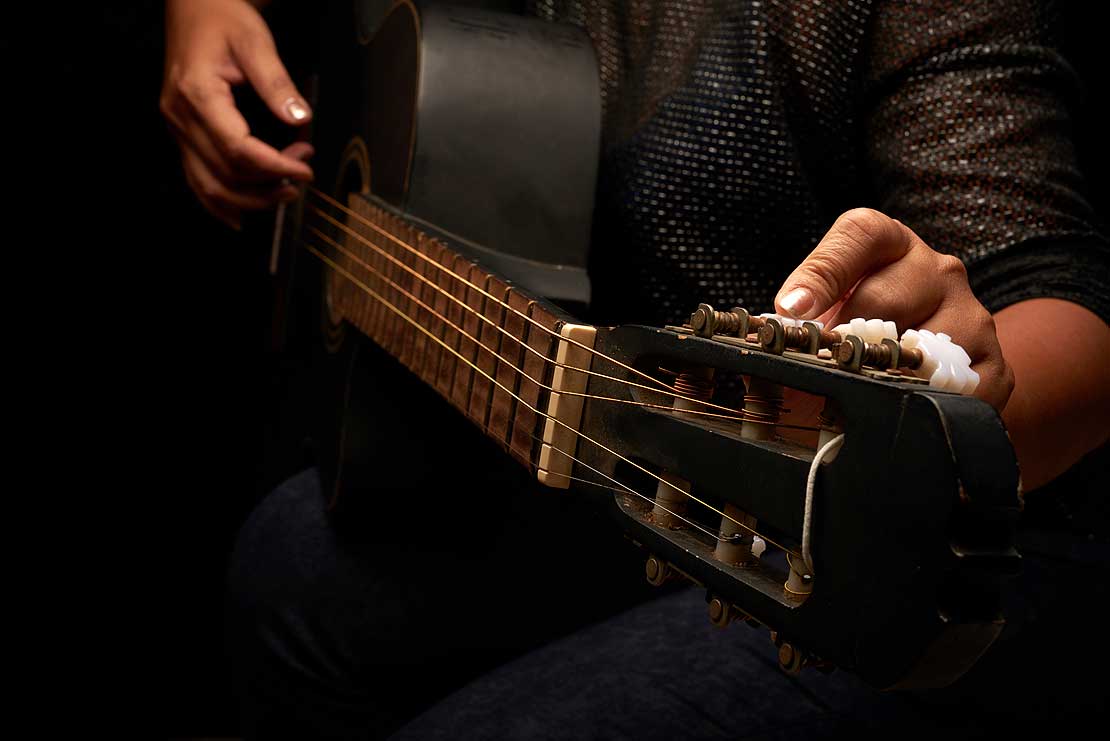 Stock image of a woman tuning a guitar (sourced from Freepik).

Massey University researchers have today released a report detailing widespread gender discrimination in the Aotearoa music community, in the first report of its kind in New Zealand.

The researchers conducted the Amplify Aotearoa survey in 2019, which was disseminated to the wider music community and received over 1200 responses.

This report specifically looks at the responses of over 600 New Zealand songwriter members of APRA AMCOS (the member organisation representing songwriters and composers in Australasia), which provides a robust census for statistical stratification.

The survey collected quantitative and qualitative data with two key aims – to find out more detailed demographic information about the music community and to find out more about the challenges they’re facing, in a confidential and anonymous manner.

Across the responses, gender emerged as a key factor impacting opportunities, barriers and experiences of discrimination, highlighting the need for analysis on intersectional issues that impact gender diversity.

More than two-thirds of women in the music community (70.1 per cent) reported experiencing bias, disadvantage or discrimination based on their gender – seven times the rate of men (10 per cent). The qualitative responses included reports from women of being undervalued, overlooked, and patronised by their peers.

Almost half of women (45.2 per cent) reported that their safety in places where music is made and/or performed was a barrier to their success, over twice the rate of men (20.5 per cent). Among the confidential responses to the survey, there were instances of sexual harassment, sexual coercion and assault, unwanted physical advances, and inappropriate comments pertaining to appearance.

A lack of gender diversity in live performance/festival and concert line-ups was regularly mentioned by respondents, and women reported instances of being turned down because an event had already fulfilled its “quota”.

The survey results also identified areas for future research in order to acquire a deeper understanding of what is happening, why, and where to act. These areas include challenges and discrimination based on other factors, such as ethnicity, age, disability, and sexuality.

Dr Catherine Hoad says her motivation to do this research stemmed from her role as a senior lecturer in the Bachelor of Commercial Music programme. “As music educators, we’re training students who will form the future workforce of the music industry in Aotearoa. We want to do our part to contribute to an industry environment that is safe and welcoming not only for our graduates, but everyone in the sector.”

Dr Oli Wilson says the College of Creative Arts has strong ties with the music industry, and they are looking forward to working with industry members on how to address the issue. “The results from our research are concerning, yet we are heartened by the way industry has acknowledged these findings and are taking them seriously. Aotearoa music’s strength is in its diversity, and it’s important that we continue to support industry towards making our sector fairer for everyone.”

Head of New Zealand Operations at APRA AMCOS Anthony Healey says: “The research shows that we have much to do when it comes to caring for and nurturing the people in our industry.

“Clearly there are genuine barriers to success, particularly for women and this must change. While some of these issues were already suspected, we now have robust evidence. The issues highlighted by the statistics are not acceptable. They demand action and thankfully this report gives us greater insight into the areas that need to be targeted as a priority.

“As a first step forward we are pleased to be part of SoundCheck Aotearoa, and keen to fast track this work, particularly pertaining to safety and conduct.”

SoundCheck Aotearoa is a collective action group of organisations, formed with the aim of developing and growing the music industry through a safe and inclusive culture in the music community.

Jo Oliver, a spokesperson for SoundCheck Aotearoa, said: “We welcome this report as it provides the evidence base needed to prioritise our efforts and work towards meaningful change together.  We want all our people to be safe at work whether in a tour van, recording studio, at a venue or in an office. This report reinforces our decision to prioritise work to help prevent and address sexual harm in our music community.”

SoundCheck Aotearoa has appointed a specialist in the area of sexual harm prevention for guidance and support, and its first priority is to support those who have experienced sexual harm. The group plans to continue its work on safety issues, including rolling out a training programme across the music sector, providing shared resources, and consulting across the music community to develop a code of conduct. This is the first initiative for the newly formed group which also plans to examine gender issues more widely, and has commissioned Dr Hoad and Dr Wilson to provide further research on ethnicity.

Read the full report here and visit the Soundcheck website for more information on the group’s actions.

Where to get help:

Male Survivors Aotearoa: Support for the well-being of male survivors of sexual abuse