Associate Professor France Grenaudier-Klijn has been made an Officer of the Ordre des Palmes Académique.

Bringing French language and culture to life for her students through a unique online programme she created – as well as translating celebrated Kiwi novelists and poets into French – have earned Associate Professor France Grenaudier-Klijn a prestigious French government award.

France, born in Paris and living in New Zealand since 1988, based at Massey University since 2002 and heading the French Programme since 2008, has been made an Officer of the Ordre des Palmes Académique. She was presented with her medal at a ceremony in the Sir Geoffrey Peren Building on the Manawatū campus by Stéphane Ré, Counsellor (Cultural & Scientific) at the French Embassy in Wellington, who France describes as “a great advocate of Massey’s French programme.”

The award was originally established in 1808 by the Emperor Napoleon as a decoration to honour eminent members of the University of Paris. The award changed into its current form in 1955 by then President René Coty, and has three grades: Commander (Commandeur), Officer (Officier) and Knight (Chevalier). They recognise significant contributions to promoting French language and culture, and have been presented to a number of New Zealand-based academics – both native French and non-French educators – including Massey’s Professor Emeritus Glynnis Cropp.

France says she is thrilled to have received the award “not only for the teaching side of things, but also for the research.” She is pleased for the recognition of the programme she designed specifically for Massey and with distance students in mind. Central to her approach is the absence of textbooks and her encouragement  - even for beginner students – to use creative writing as they grapple with tricky French vocabulary and verb conjugations. 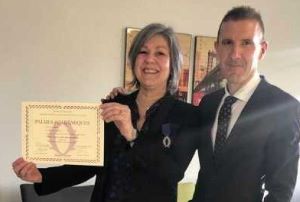 “Not only is it fun to mark, I find the students respond remarkably well to this,” she says. “Students do very well in being able to write about something that matters to them.”

So, for example, she recently asked them to write on their first week of lockdown confinement, as part of an exam. “Although I’m encouraging them to be creative, there are a range of structures and grammatical features they must include in the writing. You have structure on the one hand and freedom on the other.”

And judging by the positive responses from students, she is “more and more convinced that it’s the way to go.”

In another creative, cross-cultural exercise, she asked students to compose a personal letter – one option was to address former French President François Mitterrand about the Rainbow Warrior affair. Mitterrand was in charge when French government agents bombed the Greenpeace vessel in 1985 in Auckland on a stopover to protest French nuclear bomb tests at Mururoa atoll in the Pacific.

France says had President Mitterand still been alive, she would have “done her utmost to have some of these letters reach the Elysée Palace.”

She has also found a fun way to engage students in language learning through the concept of a journey, as students follow a fictional character travelling through French-speaking countries (for the first year), then Paris (second year) and regional France (third year). She makes a point of avoiding clichés, focusing less on the Eiffel Tower and more on Paris’s rich but lesser known features and history. Students get an in-depth tour of the French capital’s 20 distinct neighbourhoods (arrondissements) to discover hidden gems like the smallest house in Paris, a fountain where you can drink pure artesian water from an ancient well, and the history of Avenue Foch - in Paris’ wealthiest district - that was once headquarters to the Gestapo during the German occupation of WW II.

Her knowledge of the city owes much to her research on French novelist Patrick Modiano, who won the Nobel Prize for Literature in 2014 for his post-Holocaust writings set in Paris. She has been a big fan of the 75-year-old Parisian’s writing since she discovered him – ironically – while living in New Zealand. For her, his writing evoked something of the ambience of the Paris she left behind 26 years ago, albeit of a different era. She has a new book about his work coming out later this year.

As well as convening a network of French teachers in Aotearoa, she has also helped forge literary links through her work as a translator – she’s co-translated, with Associate Professor Jean Anderson from Victoria University of Wellington, four Patricia Grace novels (Tū, Mutuwhenua, Dogside Story, Baby No Eyes) and other New Zealand writers including Frank Sargeson, Sia Figiel, David Eggleton and Fiona Kidman.

France says her students come from all walks of life and locations and have a range of motivations for learning French. For more mature students, it may have been a life-long dream and for others, to enhance their employment opportunities. One of her students is working as model in Paris but studies French online because English dominates the fashion world there. Others include a professional rugby player in southern France, and a New Zealand air force member.

Some of her students are already multi-lingual and she herself has studied Italian, Spanish, Russian and “a little bit of Polish” as well as some Dutch (her husband is from the Netherlands).  “Once you start learning a language, it becomes easier to learn another one,” she says.

Motivation in language learning is arguably the key factor to success, and engaging students the challenge. France has found that her course content, from exploring the hidden charms and secrets of Paris to contemporary French music (jazz to punk) – as well as grammar – is irresistible.