How can mātauranga Māori shape our future? 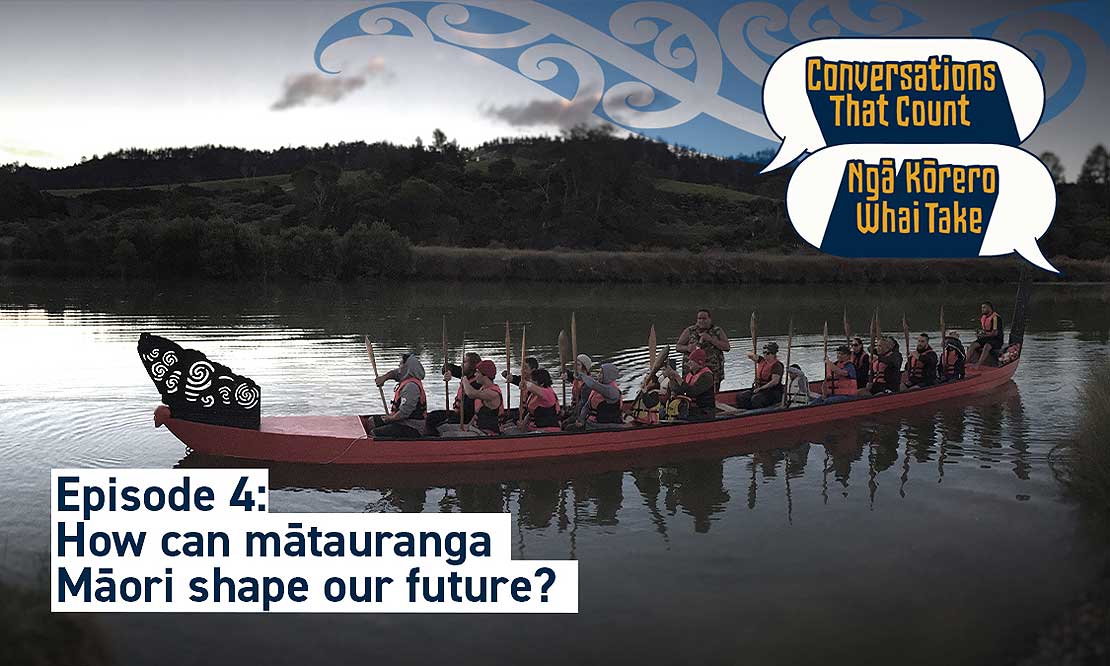 The principle of cooperation is a crucial one in te ao Māori – as the oft-deployed and co-opted whakataukī states, he waka eke noa. But while Aotearoa is a nation founded explicitly on bicultural partnership, countless social, economic and health indicators (including some already covered in this series) make it clear that the ways in which the country’s governments have implemented the principles enshrined in Te Tiriti o Waitangi have often fallen short.

In this latest edition of our Conversations That Count – Ngā Kōrero Whai Take podcast series, we take a look at not only what mātauranga Māori actually means, but also how a better understanding and broader implementation of its principles could create a roadmap for the country that’s not only more culturally considerate, but significantly more effective too.

Produced by The Spinoff in partnership with Massey University, this episode finds host Stacey Morrison joined by Massey University’s Dr Krushil Watene and the Western Initiative at Auckland Council's development and innovation specialist Alex Hawea. Together the three kōrero across a wide range of pertinent issues, covering the societal change we have already seen over the last couple of decades, what they are hoping to see going forward, and the often surprising ways that mātauranga principles are already entrenched in our lives.

Dr Watene has a deep background in indigenous philosophy and one which she says has been enormously enriched by looking outside the Eurocentric approach that the academic field has largely treated as its gospel. “There are such rich philosophical traditions all around the world,” she says, “But for a long time the discipline of philosophy and the practice of it in universities was limited to the Greek tradition only.”

But with all cultures being founded to some extent on their own unique principles, it stands to reason that alternative ways of understanding our world have existed independently of that framework – as Watene points out, it’s been noted that Indian philosophy likely predates Greek by some distance. And although her chosen practice has traditionally been bound by those limitations of its institutions, she sees significant value in the ability of her work to introduce the Māori worldview within philosophy more broadly.

“I make a point of [using the name] Māori philosophy for the work that I do, but [mātauranga Māori] is more than that – there are many ways that we do label it and those are in some ways richer, because the label that I use is about the discipline that I’m in, and making space for whakaaro Māori in that discipline.”

While Hawea’s specialisation differs quite substantially from that of Dr Watene – his experience is largely in community engagement projects, with his role at The Western Initiative being predicated on “disrupting the current way of doing things” – he echoes Dr Watene’s point that te ao Māori principles exist in ways deeper and more fundamental than those that are often explicitly discussed or stated. “A lot of the stuff you’re brought up with in that whakaaro Māori is simply those philosophies you organically, inherently have,” he says, “So to try and articulate that – to put it down on paper so that others can pick that up or try and adapt it – can be quite a long process.”

And while institutions have made significant steps to better incorporate mātauranga Māori into practices, Hawea points out that in some cases, the organisational impulse to be seen to do the ‘right thing’ can risk watering down the significance of the principles being adopted.

“The words ‘kaitiakitanga’ and ‘manaakitanga’ are bashed across the public sector in particular. On one hand it’s cool that they’re starting to adopt these whakaaro Māori, but are we losing the mana of some of those kupu in doing that?”

Although the process of reframing and realigning a country’s cultural values is, for obvious reasons, a long and extremely gradual one, 2020 finds us with perhaps more opportunity than usual to move quickly – despite effective centralised and community responses which have meant our outcomes were for the most part significantly less severe than those seen in other countries, the impacts of Covid-19’s arrival and spread on our shores have been substantial, and may be long-lasting.

Morrison offers the example of iwi roadblocks seen throughout New Zealand’s first Covid lockdown – informed, as she notes, by intergenerational knowledge of the catastrophic harms inflicted on Māori populations by historical pandemics – as an effective example of a mātauranga-led partnership approach. Hawea agrees, noting the “fact that the police were standing alongside iwi, saying, ‘We need your help, we need your understanding, we need you to help us connect.’” as indicative of what he describes as “a genuine display of Treaty partnership”.

For both guests and Morrison, the potential benefits of an Aotearoa whose guiding principles are more considerate of mātauranga Māori and more conscious of the ways in which the Treaty partnership can be articulated – a whanaungatanga approach, essentially – are large and profound. “I think it provides different ways of thinking, new ways of doing things,” Watene says. “It would rebuild communities for us, and highlight the [existing] strength of our communities.”

What does Mātauranga Māori mean in modern Aotearoa? In the fourth episode of Conversations That Count – Ngā Kōrero Whai Take, we seek to find out. Subscribe and listen now via iTunes, Spotify or your preferred podcast platform.