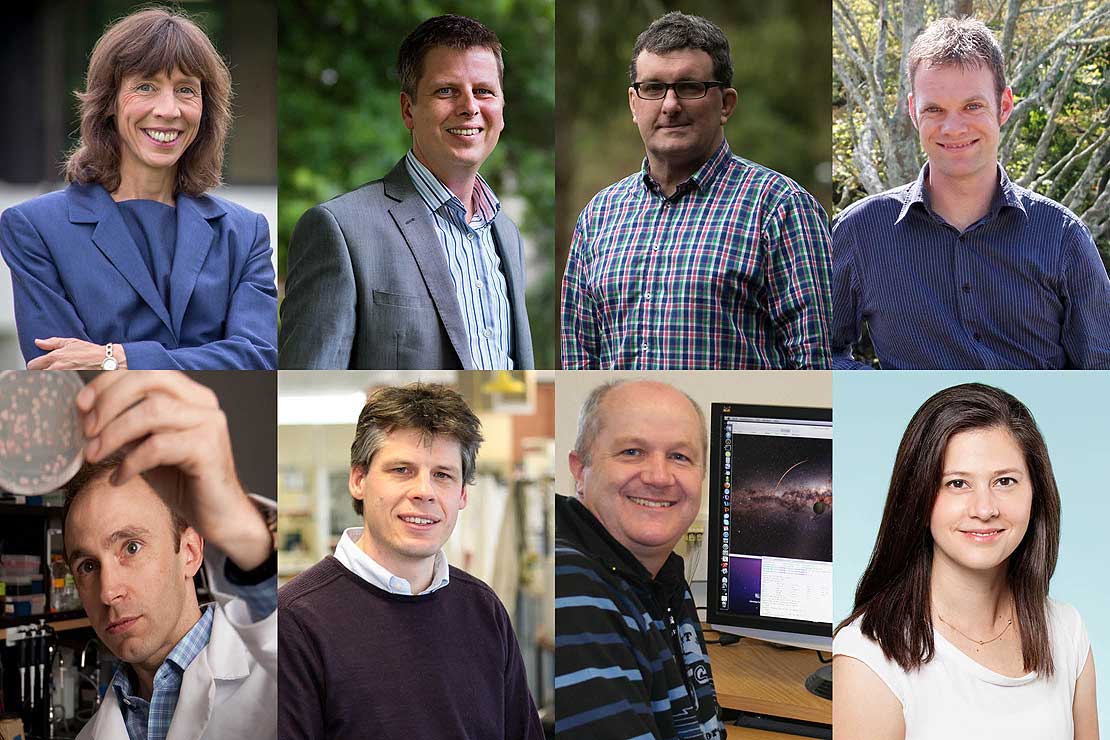 The projects – eight standard grants and five “fast-start” grants for new and emerging researchers – include finding undiscovered planets for a future NASA mission, Pāsifika funds of knowledge in mathematics and recreating parts of volcanic eruptions.

Five of the projects will received close to $1 million each over the coming three years.

Two of the researchers, Dr Agnes Szabo and Dr Jodie Hunter, have also recently been awarded Rutherford Discovery Fellowships worth $800,000 each.

University Vice-Chancellor Professor Jan Thomas says the results speak of Massey’s talent in research and its systems of support to allow excellence within a broad range of subject areas.

“At Massey we are always looking to boost and support our world-leading research in both applied and discovery research as part of our strategic vision,” Professor Thomas says. “Like any university, investment must come from within and from our strategic research collaborations with external funders who recognise the benefits of our research for Aotearoa New Zealand. These projects, and current projects supported by the fund, will continue to find new knowledge and serve our communities.”

“At Massey we seek to provide a place where new and existing researchers can flourish, which means having support structures to best enable research excellence, such as financial support through external funds like the Marsden Fund,” Professor Byrnes says. “Growth in these sources of research income is essential to advancing our profile and achieving the University’s research strategy He Rautaki Rangahau, which seeks to build upon our reputation of excellence in innovation and the creation of new knowledge.

“We have had success with the use of gravitational microlensing to discover colder planets orbiting beyond 2 AU,” Professor Bond says. “However, a new puzzle has emerged in that the most common cold planets appear to be of Neptune mass with lower mass rocky planets rarer. This is in conflict with theoretical studies that actually predict a deficit of cold Neptunes. Further progress requires the discovery of more cold extrasolar planets by microlensing. Current observations are carried out at visible wavelengths, and these are hindered by the fact that the best microlensing targets, towards the dense Galactic Bulge star fields, are obscured by intervening dust clouds.”

The team will use a new telescope and camera with near infrared sensitivity that will allow them to penetrate these clouds and open up a new discovery space for microlensing planets. The results will provide tests for theoretical models on planet formation and will address the habitability of cold planets. The data will also be used as a pathfinder for a future NASA mission that will use space-based microlensing observations to find new planets.

“These hot gas-and-ash clouds create far greater devastation to life and infrastructure than we can currently explain scientifically,” says Dr Lube. “The fundamental effects of turbulent gas-particle interactions on pyroclastic density current flow and hazard behaviours remain largely undiscovered. Why are they so destructive? Is it their high turbulence, perpetuating mechanical and thermal energy over great distances and despite significant topographic obstacles?”

Unmeasurable in real-world flows, the team will synthesise the natural conditions of pyroclastic density currents in large-scale experiments using PELE. They will conduct the most ambitious volcanic flow experiments ever conceived using extreme turbulence intensities and up to 400 degrees celsius and six tonnes of hot pumice in motion.

The team will test under what conditions, turbulence has a leading control on flow ferocity to help advance the worlds’ best computational hazard models toward minimising the lethal threat of these volcanic super-hazards.

The team, led by Professor Telfer, are proposing to design a new strategy for asymmetric catalysts that formulates the catalytic and chiral elements as independent chemical motifs.

A catalyst is a molecule or material that converts reactants into products without itself being consumed.

“Asymmetric catalysts are a special class that produce chiral compounds; molecular mirror-images akin to your hands,” Professor Telfer says. “One hand is produced in preference to the other by a process termed chiral induction. Asymmetric catalysts themselves rely on an element of chirality to achieve this. In conventional catalysts, the chiral element is closely integrated with the catalytic unit, which places limitations on chiral induction. They will subsequently be brought together and stationed in the pore of a multicomponent metal-organic framework. Chiral induction will arise from the cooperative action of the catalytic and chiral motifs in this active site.”

The researchers hope that reimagining asymmetric catalysis in this way will side-step the compromises inherent to traditional catalysts to deliver fundamental new knowledge and a platform of catalysts with unprecedented capabilities.

Professor Cooper will examine the bacterium, Escherichia coli, commonly found in the lower intestine of warm-blooded organisms, looking at the evolvability [the capacity to produce beneficial heritable variation] of lab-evolved and natural isolate strains of the bacterium, to determine the effect of evolvability on selective history, and test candidate mechanisms that underlie differences in evolvability.

“Evolvability is fundamental to the ability of biological populations to adapt to changing environments,” Professor Coopers says. “This property underlies the singular fact that all organisms alive today are descendants of progenitors that without exception survived to reproduce in the face of an assault of environmental change and uncertainty.

“Theoretical work predicts that evolvability can itself change and experimental tests of these predictions lag behind and I aim to address this imbalance.”

Can Arms Races Occur Within a Species – Dr Elizabeth Ostrowski, School of Natural and Computational Sciences – $957,000

“Arms races typically involve warfare between two species, for example, hosts and pathogens, but theory and experiments suggest that they arise within species as well,” Dr Ostrowski says.

“In almost any organism, the most rapidly evolving traits are products of evolutionary warfare. For example, as the immune system adapts to recognise and destroy disease-causing pathogens, pathogens adapt to counter these defences—necessitating further adaptations by the host. The result can be an endless ‘arms race’ of adaptations and counter-adaptations. In nature, these arms races may be the dominant drivers of evolutionary divergence, diversification, and speciation.

Within species, arms race dynamics may depend critically on recombination, which will mix and match counter-strategies.

The team will use the tractable model system for evolutionary warfare. In this system, they can experimentally manipulate recombination and observe coevolutionary dynamics in real-time in the laboratory and nature. The research addresses a fundamental driver of rapid and escalating evolution, while providing insights into how internal conflicts prevent communities from reaching what is optimal for all.

Not too hot, not too cold, just right: New models of species’ responses to their environment – Distinguished Professor Marti Anderson, New Zealand Institute of Advanced Study – $936,000

“Species are being destroyed faster than they are being discovered,” Professor Anderson says. “Despite growing repositories of global ecological data, current models of species’ responses to broad-scale spatio-environmental gradients, such as temperature, latitude, depth, nutrients, moisture, or elevation, are either overly simplistic or they are a ‘black box’ without meaningful interpretable parameters.”

As a specialist in Antipodean colonial-era literature, Dr Steer’s project is to reassess settler poems, novels, and travel narratives as a form of environmental knowledge. His study will provide a new account of colonial culture in Australia and New Zealand, and its intersection with Indigenous ecological knowledge and with developments in colonial science. By examining creative writing of the era in the context of specific environmental changes and debates, he will explore the insights into how societies define the limits of their environmental responsibility.

Knocking off: Strikes in Aotearoa New Zealand from the late 1960s to the mid-1980s in a global context – Dr Toby Boraman, School of People, Environment and Planning – $340,000

From the late 1960s to the mid-1980s, industrial strikes were prevalent in New Zealand. Dr Boraman will trace transnational connections and major influences linking strikes in Aotearoa and the broader South Pacific. Using a Global Labour History framework, he will incorporate oral histories to uncover the hidden story of strikes to capture previously excluded voices, including those of Māori workers, migrant Pasifika workers, women, and rank-and-file unionists.

As urbanisation accelerates in the Pacific, her research will address the importance of understanding how customary owners and tenants frame their mutual responsibilities beyond the cash nexus. By questioning tenants and landowners about how they try to create safe homes and manage community tensions, she will seek to understand how their practises are transforming ideas about risk, well-being, and agency in PNG.

Historian Dr Rachel Bell will examine the impact of the 1984 Labour government’s economic reforms, including on the agricultural sector and family farms. The reforms ending farmers’ subsidies and tariffs were acknowledged as the most comprehensive and ambitious of any capitalist society at the time. She will explore how rural communities adapted to the changes and how these experiences inform present day concerns about the impact of technology, globalisation and the future of work.

Dr Hunter will explore culturally embedded knowledge and successful mathematical experiences of Pāsifika learners in their everyday settings – at home and in the community. She aims to describe Pāsifika mathematical knowledge by involving participants (aged 7 to 15 years old) and their families in documenting their out-of-school experiences with mathematics through photography and video recording and then describing this during interviews. The aim of her project is to raise awareness of Pāsifika learners’ strengths and address current equity issues in education.

Growing old involves complex developmental and social changes for all individuals. However, navigating the ageing process can be especially challenging for migrants because of their dual cultural and transnational contexts that often present contradictory expectations. Dr Szabo’s research will draw on narrative interviews and life history data to explore what ageing well means for migrants. Using a culturally sensitive and ethical framework, she will explore migrants’ capabilities to age well and will consider how they may be hindered by social and institutional factors that create systematic barriers to accessing resources.

The vast majority of gang research is conducted in the northern hemisphere with very few references relating to Pacific Island communities. Yet there are distinct cultural factors particular to the experiences of Pacific populations that this existing “northern/western” paradigm does not well account for.

This study initiates a process of refining existing criminological theory so that it is better equipped to explain or model a Pacific criminological perspective. It aims to study the gang phenomenon in a particular Pacific subpopulation to illustrate the possibilities and challenges of constructing a “Pacific Criminology”. Sixty life histories will be collected from Sāmoan gang involved youth, focusing on male and female gang membership in New Zealand, Sāmoa and Hawaii. Findings will enhance theoretical understandings of Pacific gang research, with attention to life history perspectives, gender and Pacific voices.