Ruapehu Volcano has experienced over 60 lahars (hyper-concentrated flows and debris flows) of varying volume over the last 140 years, mostly owing to its 10 million m3 Crater Lake perched at 2530 m. The most devastating event was in 1953, when a breakout flood from the lake generated a lahar that destroyed the Tangiwai rail bridge, derailing a passenger train and killing 151 people. During 1995-1996, more than 35 lahars were generated from explosions through Crater Lake. In addition the outlet of the crater basin was raised by 6-9 m through deposition of coarse tephra and other breccias. During 2001 a lahar deflection structure was constructed to prevent a lahar flowing into the Tongariro River Catchments. This was an attempt to mitigate and avoid the significant economic damage that occurred during 1995-1996. Since early 2004 the lake rose behind the breccia-dam and up to 1.5 million m3 of water was liable to be released by a sudden failure of the barrier.

The objectives of this study were: 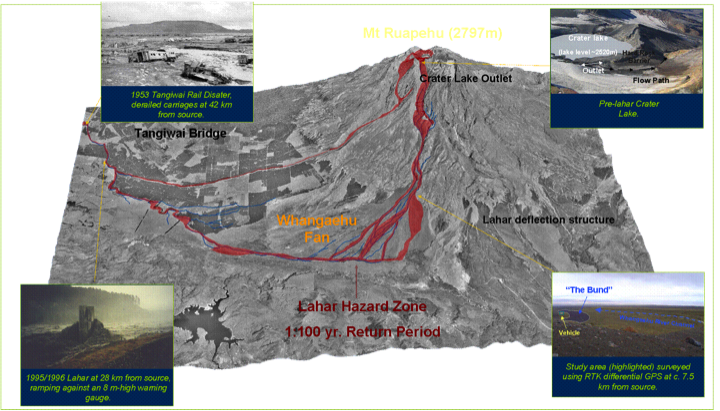 Titan2D, developed at SUNY Buffalo, is based on a model for a “shallow-water” granular flow. Along with other approaches, Titan2D offers a chance to simulate debris flows at the lowest end of the mobility spectrum at Ruapehu. Flow volumes of 6-9 million m3 were used; i.e., bulking factors of 4-6x on a 1.5 million m3 water breakout. The pile was placed within the lake basin, which was “filled” on the DEM to the former outlet height, with the tephra/breccia dam dimensions subtracted from the basal DEM.

Photogrammerty and LiDAR DEMs of 1m, 5 and 10m resolution were used for simulations. Using server grade workstations and parallel super computer arrays, simulations with a high computational mesh density were used to sample the DEM with enough precision to adequately represent the terrain and simulate flows.

Simulations were well matched to observed historic flow velocities and inundation areas over the first 15 km of travel using optimised parameters. Inundation areas and volume fluxes also matched well at locations where detailed surveys of the 2007 lahar “tide-lines”, deposits and discharge estimations could be compared.

The results calculated for a modelled flow at The Bund site using the slope/area discharge calculation between two pulses at 16mins and 19mins of travel time match the observed discharge of the 2007 lahar flow front arriving at 18 mins.

Applying Titan2D to forecasting a range of Ruapehu debris flow hazards successfully forecasted the 2007 flow at the Bund Mt. Ruapehu.