Aerial photographs dating from 1955 to 2007 of the Rangitikei River at Bulls were scanned and rectified to assess the nature of historic channel change in the lower Rangitikei River. Features on the rectified aerial photograph were accurate to within 6.5 metres. The morphology of the reach was mapped for each time period, with particular attention to the boundaries of the active channel, bar and wetted channel margins and delineating areas of active, semi-vegetated and vegetated sediment within the active channel A clear directional change is evident in this sequential map. The river has changed from a morphologically diverse multi-thread braided planform to a more uniform single thread planform over time. Interrogation and analysis of the map was performed within ArcMap GIS® in order to quantify the extent of change evident. 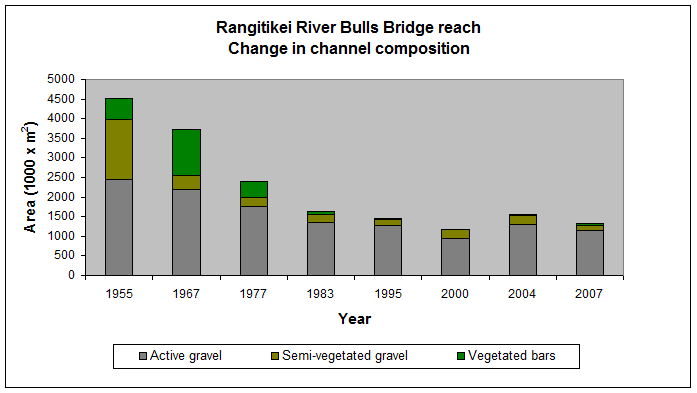 Areal extent of active gravel (defined as being unvegetated due to frequent reworking of sediment), semi-vegetated gravel and vegetated bar was assessed for each reach over the time period examined. This demonstrates a reduction in morphological diversity within the reaches over time as well as a reduction in active bar area. Active channel widths in the reach were quantified by measuring a total of 30 equally spaced sections spanning the active channel, perpendicular to its alignment. Spacing was scaled to reach length. Whilst there is some variability in widths, an overall narrowing of the channel over the period of study is evident. The statistical significance of the apparent changes over time was assessed using parametric analysis (t-test) of active channel width data. This demonstrates statistically significant narrowing of the active channel over the period of investigation, by as much as 74%. The majority of channel transformation occurred prior to 1983 and is attributable to the success of the lower Rangitikei Scheme on this river. In particular, bank stabilisation works have narrowed the active channel.

There was some limited adjustment to the February 2004 flood event on this river evident in the Bulls Bridge reach. However change was small in comparison with the trends evident over the 50 years assessed by this study.