Linkages between slopes and channels strongly condition river channel behaviour. Where slopes are connected or coupled with river channels, the products of catchment erosion are delivered readily into the channel network. This scenario increases the sensitivity of river channels to catchment perturbation and increases the likelihood of channel change in response to erosion-triggering events in the catchment. The coupling or connectivity status of a catchment is conditioned by catchment configuration: short, steep slopes in narrow valleys readily couple with channels. Inevitably this means upper parts of catchments are more strongly connected than lower reaches.

Research in the upper Waipaoa catchment has assessed seasonal slope-channel coupling between the Tarndale Gully and Te Weraroa Stream via an active alluvial fan. The approach used behaviour of the fan to infer sediment delivery from the gully using a morphological budgeting approach. A model has been developed identifying complex connectivity patterns between the gully, fan and stream channel. 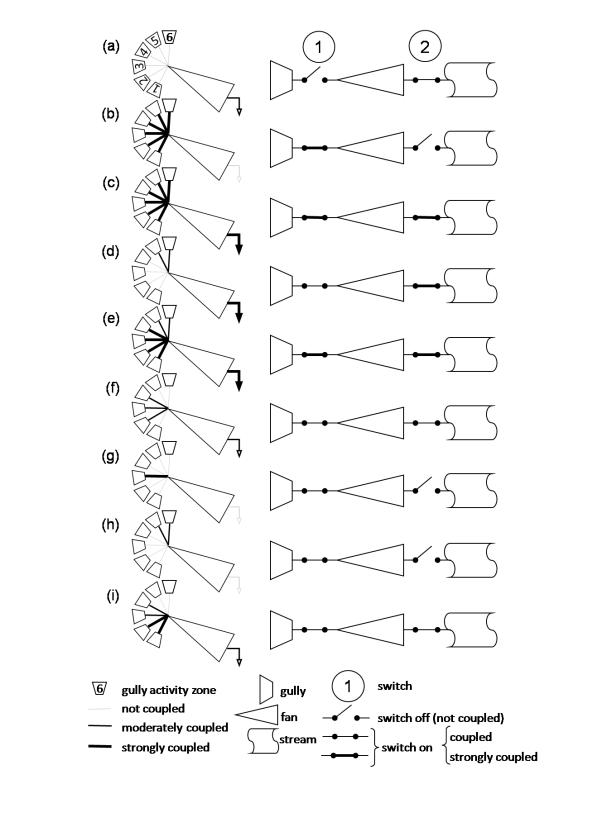 Complex cutting and filling of channels in the Tarndale Fan system at the slope channel nexus (sink & source) is strongly dependent on sediment supply, linked to processes in the Tarndale gully complex (source). Incision of the lower fan responds to base level changes associated with trimming by Te Weraroa Stream. Upper fan cutting / filling reflects activity in the Tarndale gully system and can identify discrete sources within the complex. Mass movements in one area of the complex are not necessarily in phase with other parts of the system, and the precise timing and location of sediment delivery is dependent upon mass movement history. Mass movement susceptibility has an impact on the degree of connectivity between sections of the gully complex and associated fan components, effectively switching on or off this critical junction switch at discrete locations in the gully-fan nexus. It is necessary to recognise the complex array of processes operating at the slope-channel nexus to understand sediment delivery to channel systems in this steepland environment. This research demonstrates patterns and processes operating in a highly sensitive channel system which responds rapidly to sediment supply variability from the Tarndale Gully & trimming of the lower fan.