Matariki and the Māori New Year occurs in the middle of each year. Find out what it involves, traditional practices and how you can participate. 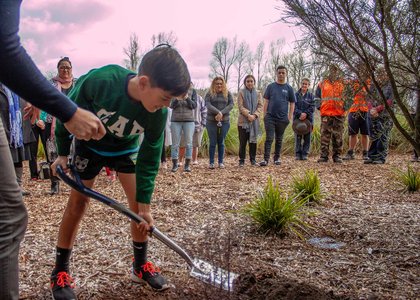 In customary life for Māori, the rising of the star cluster Matariki (otherwise known as Pleiades) signalled the drawing to an end of one cycle and the emergence of a new one. It also signalled Hine Takurua (the winter maiden) had firmly taken residence upon the land.

At Massey we continue to honour the tradition of Matariki in events on campus and in the community. Take time to look after your family, yourself and those closest and dearest to you. Stop and take time reflect and listen to the natural rhythms of the earth and environment around us, to cook and share food together as whānau and to look after your neighbours.

There are many festivals and events held in the community during Matariki. Many local community groups and councils run activities. Information about these events will be available later in the year.

Matariki is a specific celebration to Aotearoa New Zealand and honours our season of winter under our stars. It is an opportunity for all New Zealanders to honour our environment and to open ourselves to learning about the traditions of this country which go back hundreds of years beyond colonial settlement.

Matariki is not one specific day it is a season heralded by the rise of the Matariki cluster in the eastern sky in winter. The dates that iwi and hāpu use to mark the rise is dependent on where they are in the country and which particular stars in the cluster they give honour to.

There is no one way to celebrate Matariki, but events or activities that encourage the following are suitable:

Stars in the Matariki cluster

There are generally considered to be nine stars although this differs between iwi and hāpu. Each star is seen to hold significance over particular aspects of our lives or the environment.

In June/July Matariki can be seen low on the eastern horizon at dawn.

Some iwi celebrate the star cluster ‘Puanga’ or ‘Puaka’ instead of Matariki at this time of year. Matariki isn’t as clear for some iwi to see from their locality yet Puanga is much clearer in the sky. This does not mean Matariki is rejected. It just means Puanga is given preference. Check with local iwi which star cluster is celebrated in your area.

There is much written about Matariki and much is still being unearthed and rediscovered. Each iwi and hapū have their own stories and interactions with Matariki but wherever you are based, the rising of Matariki on the eastern horizon signalled the start of a new cycle of life.

Hope for the new cycle and the promise of new growth, bountiful crops and wild abundance were sown into karakia at Matariki. The balance of life and death, farewelling those who had passed and welcoming a new season of life and abundance were at the forefront of the people’s hearts and minds.

With the earth tilting away from the sun and much of the abundance of Hine Raumati (the summer maiden) dissipating, Māori societies contracted and instead of ranging far and wide they tended to retreat to the warmth and safety of a home base.

It was also a time of significant work and preparation. The harvests of the summer season had been appropriately stored to sustain the people through the winter and the preparations for a new season were being made. It was also a time for whānau to spend time together to engage in all manner of family and community activities. It was a time for sharing, learning and playing and a time for strategy.

With winter came the rain and the land was inundated with wai māori (fresh water). The time of Matariki tāpuapua is seen as cleansing and revitalising the earth and replenishing soil with potential in readiness for the break of kōanga (spring). It is also a significant time for Hine Pūkohurangi (the maiden of the mist) as the cold chill of winter and the warm heart of Papatūānuku collided and people clung close to mother earth for warmth, hence the time of Matariki haukunui.

Matariki was also a time when all those who had passed in the year were remembered, celebrated and bid a final farewell as the earths annual life cycle drew to a close. They were encouraged to travel on to Pōhutukawa, te huinga o ngā mate, the meeting place of the travelling spirits, hence the time of Matariki tohu mate (Matariki in remembrance of those who have passed on).

Matariki takohanui (Matariki the time of giving and sharing)

Matariki was also a time of giving and sharing, sharing time with loved ones, warm meals in the warmth of your whare, by a fire if you were fortunate to have one, or snuggled up next to the heater! A time to share your knowledge and experience with those who seek it, a time to exchange handmade gifts and to relish in the sharing in the gift of time.

For more general information, you can find an excellent Matariki booklet in PDF format hosted on the Te Taura Whiri i te Reo website (PDF, 1.5 MB)