Massey began as an agricultural college in Palmerston North. The college officially opened on 20 March 1928 as a fully constituent college of the University of New Zealand.

From 1879, strong political support existed for an agricultural college in the North Island of New Zealand. Sir George Grey (former Governor of New Zealand), the Farmers' Union, and George Hogben (Inspector-General of Education) were strong supporters of a college.

Massey is named after former Prime Minister William Ferguson Massey. He announced the establishment of an agricultural college in the North Island as a priority in his inaugural speech in 1912.

Professor William Riddet, former Chair of Agriculture at Auckland University College, was appointed to the chair in agriculture. 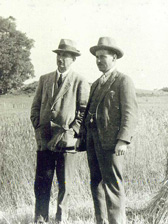 The two founding Professors. Professors Geoffrey Peren (left) and William Riddet shown here in the 1920s when they were investigating possible sites for the Agricultural College.