Riddet set up the degree and diploma courses in general agriculture and dairy farming. The courses taught agriculture as an integrated whole, rather than a collection of science subjects. The courses also included practical farming and factory experience.

Riddet also helped promoted research as a way of solving problems within the dairy industry. The Massey farms tested new practices and equipment like artificial breeding, overhead irrigation, the herringbone shed, and the electric fence.

Preparing for the first intake of students in 1928

In total the College had 20 staff. The staff began preparing in August 1927 for the first intake of students in March 1928.

In Massey’s first year, eight students enrolled on the first day, with 85 students enrolling overall. The following year, the number of students more than doubled at 175. Courses were open to women, but the first women students didn’t enrol for another four years.

The speeches at the opening discussed the advantages of coordinating science with practical experience. The Mayor of Palmerston North hoped that Massey would in time help make Palmerston North become the ‘Cambridge of New Zealand’.

Developing the Agricultural College into a multi-faculty university was also mentioned. This development would reap the benefits of both the arts and sciences and produce well-balanced individuals.

Massey during the Great Depression and World War II

During the Great Depression (1929-1933), Massey had a drastic cut in funding. Despite the funding cut, Massey increased its land area and added new teaching, research and accommodation facilities.

During World War II (1939-1945) the Principal, many of the staff and most of the students were drawn into the army or related activities. Towards the end of the War, the College introduced rehabilitation courses for returning servicemen. 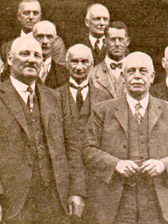 A group of dignitaries at the official opening of the College, 20 March 1928.