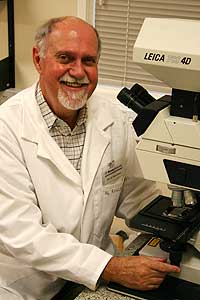 Retired Associate Professor Al Rowland has been named by the New Zealand Herald newspaper as one of the top 10 New Zealanders of the year for his chromosome research on former military personnel exposed to nuclear testing.

Dr Rowland, who retired earlier this year from the Institute of Molecular Biosciences on the Manawatu campus, found the veterans had suffered genetic damage – research a British High Court judge described as "pivotal" in the judge's decision to allow former servicemen to seek compensation from the British Government.

Before his retirement, Dr Rowland was the inaugural winner of the Massey University Students' Association (Manawatu) lecturer of the year award.

You can read the Herald's original feature on Dr Rowland here.