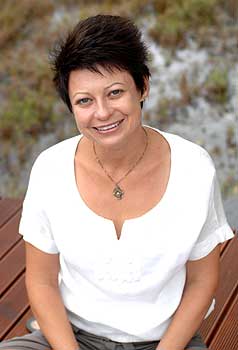 Doctoral student Johanna Emeney has been shortlisted in the international category of Britain’s prestigious Hippocrates Prize for Poetry and Medicine.

Ms Emeney, from the Albany campus, entered four poems, one of which is among three shortlisted and another is in the top 40. The prize, worth £5000, attracted entries from 23 countries.

Ms Emeney’s PhD in English is on medical discourse in poetry. She recently wrote a series of 10 poems on medical themes for the first stage of her thesis. Her link to the competition came while researching poems with “doctor-poet” and “patient-poet” voices. She read eminent New Zealand poet CK Stead’s collection, The Black River, written after he suffered a stroke in 2005, and learned about the prize when Stead won the international section of the inaugural competition last year with his poem, Ischaemia,

Her shortlisted poem Radiologist’s Report is based on a report her mother received informing her of secondary breast cancer. “The report was very clinical, very blunt and with no emotion. I wanted to explore the voice of the person writing a report that contains such life-changing news.”

The prize will be announced on May 7. Both poems placed in the top 40 of competition will be included an anthology of entries published by the organisers of the prize.

The other poem, Peripheral Neuropathy, aims, through its title, to bring some humour and lightness to the topic of a disease of the nerves.

Ms Emeney has been touted as one of New Zealand's rising poetry stars. Her work has appeared in the in Metro, North & South, Takahe and other New Zealand publications as well as in Britain’s The Guardian. Her first poetry collection, Apple & Tree, is due to be published in July by Cape Catley.

She returned to New Zealand four years ago after 14 years in England, during which time she completed bachelor and master’s degrees at Cambridge University, and has taken a year off from teaching English at Kristin School, Albany, to work on her doctoral thesis at the University’s College of Humanities and Social Sciences.